Pitso Mosimane’s Al Ahly faced an onslaught of verbal attacks ahead of his team's game against Mamelodi Sundowns on Saturday May 23 2021. Photo: Eurasia Sport Images/Getty Images

Pitso Mosimane's agency described the incident that took place on Saturday "although deeply disturbing, is not an isolated one."

They explain that sections of Mamelodi Sundowns never accepted are made peace with Mosimane being part of the club. Mosimane's team says this incident is another example "of the grudge that some in the club continue to hold against him even after leaving the club," and have singled out the club as a whole for it's wishy-washy apology.

"As the Management Compay of Coach Pitso, we are disappointed that Mamelodi Sundowns FC has not apologised to him personally but issued a general statement apologising to Al Ahly 'and those associated with the team'."

"This is not good enough," the statement read.

We have issued a statement over the events that took place prior to the CAF Champions League this past Saturday. pic.twitter.com/pssX0c6KnP

The fact that it took Mamelodi Sundowns almost 24 hours to issue a statement condemning their supporters’ despicable and thuggerish behaviour towards former coach Pitso Mosimane on Saturday is concerning.

On Sunday afternoon, Sundowns issued a statement saying it would institute an investigation and appropriate action will be taken against supporters who swore and hurled insults at Mosimane outside Lucas Moripe Stadium in Atteridgville on Saturday afternoon. 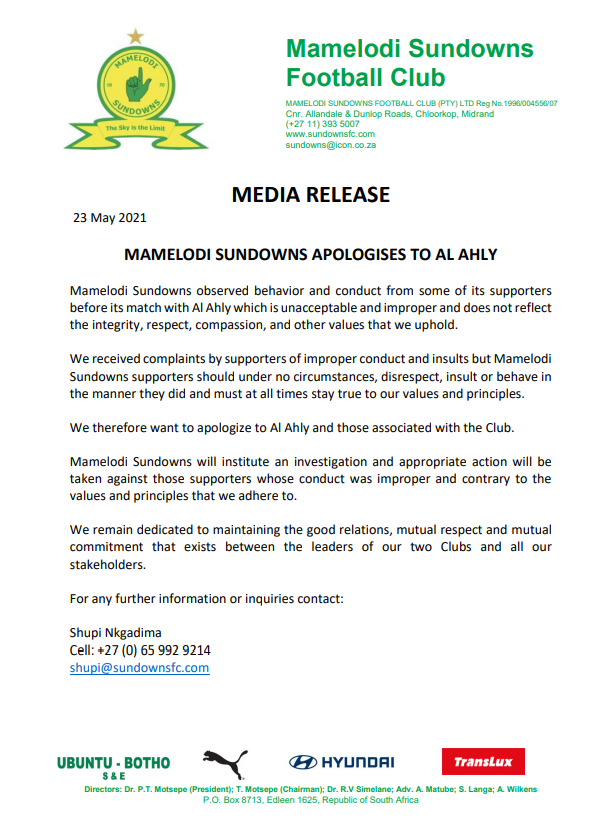 Sundowns issued a statement on Sunday after its supporters launched an attack on Al Ahly coach Pitso Mosimane.

This incident happened before Mosimane’s Al Ahly played against Sundowns in the CAF Champions League.

The club is active on social media and should have immediately condemned the incident.

This will give credence to the theory that some people within the club were behind this orchestrated incident, as claimed by Mosimane.

But no amount of spin can justify the actions of these thugs who have tarnished the image of South African football – and that of genuine fans - and Sundowns’ brand in particular.

I must say the group of supporters who were brandishing defamatory placards in the face of Mosimane and the Al Ahly team bus did not only just embarrass Sundowns but the whole nation.

I’m equally embarrassed and disappointed about it.

It is unacceptable for supporters to behave like that – irrespective of how they despise a person. How could they stoop so low against one of their own who won them 13 trophies during his tenure at the club.

Those hooligans must be punished.

WARNING: This video contains explicit language and is not for sensitive viewers.

Y'all insulted Pitso Mosimane, phew. Y'all gotta heal, it's over. Y'all must accept it? Kaizer Chiefs supporters we've had our differences with @TheRealPitso, but we've never disrespected him to such an extent. He's our foe in football, out he's someone's son, father, husband... pic.twitter.com/gPwG7sQQkr

Pitso Mosimane says “they insulted me & my mother, I know who did this & who instigated them. Even before I came to SA people told me about what was planned against me”. He must reveal their names & they must be dealt with. Why is Sundowns silent though? pic.twitter.com/7J2okZbr64

I still can’t believe that adults went out of their way to put on such a disgusting performance and say some unprintable words towards a man who brought their club nothing but glory in the eight years he was in charge of Sundowns.

After the match Mosimane said he knew an official who was behind this and this should be the starting point of Sundowns’ investigation into the matter.

In case the club don’t know how to track this, herewith the statement given by Mosimane during the post-match conference:

“Even before I came to SA people told me about what was planned against me,” Jingles told the media at the Lucas Moripe Stadium conference room.

“I know who was behind that protest. That person is bitter because I left and I have had to move on with my life.

“There is more and I don’t want to talk about it right now. I can show you my phone, the correspondence and the emails I have received. They just don’t let me go.

“Those emails are not from the supporters. They come from the main office and there’s only one person who can allow that. There are emails from lawyers asking why and how I left, but I’ll save all of that for my book. I’ll write a book.”

I think it is about time he revealed their names and they must be dealt with. We can’t wait for his book because by the time it is published we would have forgotten about this incident.

We live in a world where facts and fiction get blurred
In times of uncertainty you need journalism you can trust. For only R75 per month, you have access to a world of in-depth analyses, investigative journalism, top opinions and a range of features. Journalism strengthens democracy. Invest in the future today.
Subscribe to News24
Next on City Press
Tim Spirit | Delaying DC cases backfires on PSL