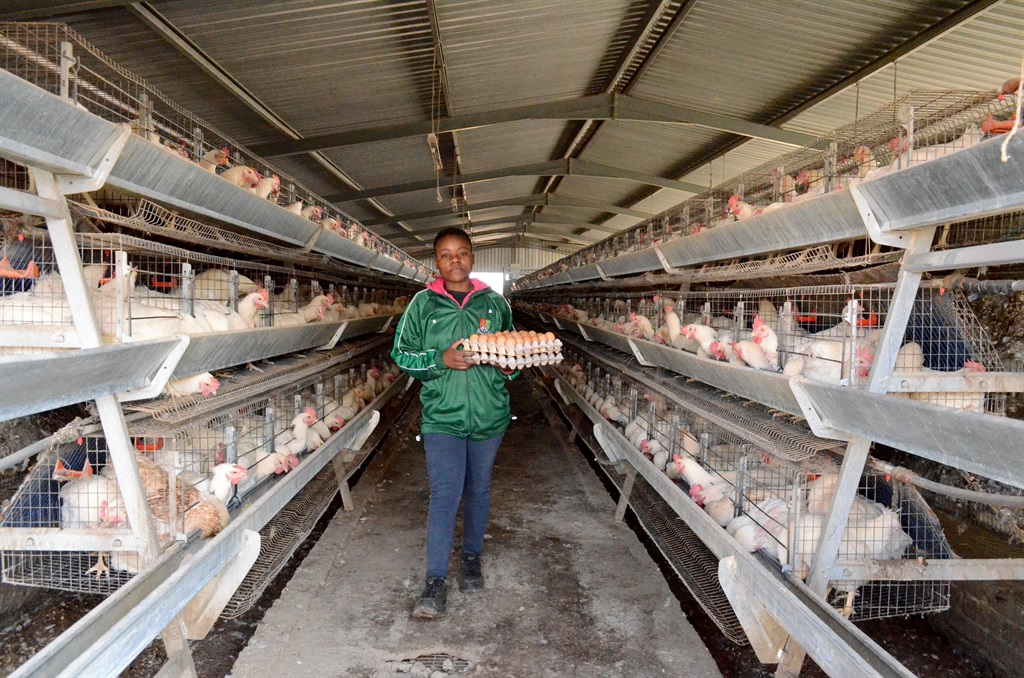 She wanted to be a fashion designer, but Sipengane showed she wasn’t chicken to take on the family farm, write Fanelo Maseko and Isaac Khumalo

Since taking over the running of her family’s poultry farm two years ago, 24-year-old Mbalentle Sipengane has more than doubled the farm’s turnover.

Armed with the agricultural degree her parents encouraged her to get, she is proof that hard work, innovation and determination lead to success in the competitive world of farming.

Sipengane runs Monzai Eggs, a poultry farm on a plot outside Vanderbijlpark.

The farm produces more than 31 857 trays of eggs a year, allowing Sipengane to generate an annual turnover of more than R1.4 million. The farm belongs to the land reform department and has been leased to her parents’ company Monzai Eggs Poultry Farm since 2004.

They acquired the farm from a white family in 2000.

A native of Vanderbijlpark in the Vaal, Sipengane’s unexpected passion for farming was instilled in her by her parents, who struggled to keep Monzai Eggs Poultry Farm going over the years.

“My parents had to overcome a lot of barriers as black farmers because it’s a white-dominated industry. Like the one day when they ordered fertile eggs from one farmer who refused to help them simply because they were black.

“The farmer never agreed to meet us for negotiations until we involved our white friend who sent an email pretending to be our boss, we then managed to order the eggs under his name.”

Sipengane’s parents – both former teachers – have been farming since 2004, but without much farming knowledge or experience.

Her mother Busiswa Maya (53) said that even though they had bought the farm in Meyerton, they weren’t allowed to start the agricultural business until the local municipality gave the go ahead.

“We went from pillar to post with the municipality trying to get permission to run a poultry farm, with no success. Our mostly white neighbours prevented us from starting the business. We believe it was mainly because we are black farmers.”

Eventually, they gave up, sold the Meyerton farm and moved to Vanderbijlpark where they now farm.

Sipengane said it was shortly after they arrived in Vanderbijlpark in 2004 that they got the authority to start their poultry business.

Although she’s proved quickly she has a flair for farming, Sipengane said farming was far from her first love.

“All I wanted was to become a fashion designer but this dream was changed by my father Neto Maya (57), who accompanied me in 2013 to register at the North-West University.

“When we got there, there was no more space available for fashion design courses. The only available space at the time was for engineering courses. So on our way back home my father persuaded me to opt for agriculture.

“He suggested we pass by the Potchefstroom Agricultural College to see what courses are offered there. But when we got there he insisted I register for agriculture, saying my year would be wasted if I did not study. I agreed because I also did not want to stay at home the whole year.”

She said her first day at the college was awful because many of the students came from agricultural high schools and so she felt they had a head start.

However, this all changed when she passed her first test with flying colours.

As part of her studies, Sipengane went to do experiential training in Modimolle in Limpopo.

After her training, she went home to help her parents with their then struggling farming business.

“My parents allowed me to lead the business. It was overwhelming and exciting to realise their confidence in me.”

In the two years since Sipengane has taken over the business has grown from strength to strength, doubling its turnover.

But she said it was all because of teamwork; her parents are still involved as mentors and her siblings help in the day-to-day running of the business.

“When I came back from school, the business was generating an annual turnover of just more than R500 000. But this is gradually changing because in 2016 we generated more than a million and last year more than R1.4 million. We are a growing business and the numbers are a huge motivating factor in our growth,” she said.

There are three chicken sheds for the production of eggs. The first shed houses 9 000 chickens, the second has 2 980 chickens and the third is being revamped for Sipengane’s latest innovation, breeding her own type of chicken.

Each chicken produces an egg a day and these eggs are sold to local supermarkets, informal traders and local people.

The farm produces, in all, 158 trays of eggs a day. In the last financial year Monzai Eggs sold 31 857 trays of eggs.

Sipengane said that even though she studied agriculture, it was not easy – especially for a young black woman farmer – to succeed in the farming business.

“I always have to explain myself to some suppliers as they do not believe that at my age I can run a farm.”

Her mother Busiswa said she and her husband were concerned about a succession plan for the running of the farm and making sure that the wealth of the family was passed on to the next generation.

This is why, she said: “We thought of empowering our kids while they are still young; we pushed her to do an agricultural course. Allowing her to run the farm has opened our eyes; we had our own outdated style of managing a farm as adults. But these youngsters know how to research new ways of doing marketing and finances.

“They are also good in dealing with price increments and percentages,” said Busiswa.

Sipengane, meanwhile, surrounded by noisy chickens, said she’s amazed how much she loves her work, for which she’s proved she has a real flair.

This story is provided by Loxion News, a member of the Association of Independent Publishers This feature is part of a journalism partnership called Our Land between City Press, Rapport, Landbouweekblad and Code for Africa to find the untold stories, air the debates, amplify the muted voices, do the research and, along the way, find equitable solutions to SA’s all-important land issue. Grab your copy of City Press on Sunday for more stories about Our Land, an ongoing editorial project
We live in a world where facts and fiction get blurred
In times of uncertainty you need journalism you can trust. For 14 free days, you can have access to a world of in-depth analyses, investigative journalism, top opinions and a range of features. Journalism strengthens democracy. Invest in the future today. Thereafter you will be billed R75 per month. You can cancel anytime and if you cancel within 14 days you won't be billed.
Subscribe to News24
Related Links
Meet Rabelani Mamangwa, the farmer who turned land into ‘Eden of Limpopo’
The story of a workers’ farm
Land reform is a success on this farm in Limpopo
Next on City Press
Torching of Bushbuckridge offices might be a cover-up for corruption