Africa’s fine flavours are deliciously diverse and awesomely ancient. Until recently, our continent’s gastronomic glories were served as home food or at simple street stalls but seldom in elegant restaurant settings.

Home or street food can be wonderful but it is a different kind of wonderful from restaurant haute cuisine. And the world wants both.

The good news is that chefs, working in Africa and overseas within the New African Cuisine movement, are increasingly introducing innovative interpretations of our continent’s traditional tastes into their restaurant repertoires.

African restaurant chefs seldom receive the recognition that they deserve. In recent years, some wonderful cookbooks, such as Nompumelelo Mqwebu’s Through the Eyes of an African Chef, have won prizes but very few of the writers have an actual restaurant that diners can visit.

It’s almost Christmas and time for travelling and tasty treats. We hope that our guide to the best New African Cuisine restaurants worldwide will inspire you to explore our continent’s epicurean excellence. Chef John Goffin’s casual but superstylish Poivre Noir bistro was recently described by the New York Times as “the best spot to taste the creative fusion that marks Kigali”. Goffin says that he finds inspiration in “the high quality of Rwanda’s ingredients which are all around us”. Signature dishes include ravioli stuffed with wild dodo (amaranth) with Musanze mushrooms and fromage du Kivu.

Siya Kobo takes the traditional tastes of the Eastern Cape on exquisite epicurean adventures. He says: “As a chef I always want past and present, modern and ancient, to talk to each other in my cooking.

“Each taste should take diners on a journey of memory. I try to take people with me into a story.” It takes Moroccan cuisine in a modern direction with dishes such as seared fennel-crusted tuna with toasted tahini. In 2010 Aziza became the first Moroccan restaurant in the US to receive a Michelin star. Last year, chef Dieuveil Malonga was ranked sixth by Forbes magazine in its 30 Under 30 African top achievers. He was described as “the Congolese chef whose start-up is taking African cuisine to the world”.

When he is not feeding the gourmet glitterati in his eponymous Paris eatery, Restaurant Malonga, Malonga travels across Africa staging posh pop-ups and compiling a continent-specific spice map. 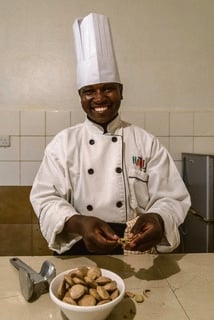 John Mshana is the head chef at Hatari Lodge in the Arusha National Park in Tanzania. He works extensively with east African heritage ingredients, including Arusha stingless bee honey, African horned cucumbers and Red Masai sheep. He says: “I have a deep love of Tanzania’s indigenous oyster nuts which we call ‘kweme’ in Swahili.” His signature sweets include a glorious kweme and cacao tart.

The African diaspora comes home with Caribbean style at the bar in the form of a glorious Haitian rum and west African ditakh fruit cocktails. In Lagos, he is the culinary creative director at Nok by Alara. He says: “Our aim [at Nok] is to show that African food can be elevated and presented in a contemporary setting without losing its identity.”

Chef Kobus van der Merwe’s tiny Cape West Coast eatery was named the Best Restaurant in the World at the World Restaurant Awards in Paris in February this year. The menu offers what the chef calls “new Strandveld cuisine” and makes extensive use of foraged indigenous ingredients. Superseasonal, but expect the unexpected in dishes such as smoked angelfish with slangbessie, soutslaai and spring flowers or the magnificent mabele dessert with local weissbier and strandveld honey-topped winterweizen.

Originally from Middelburg in Mpumalanga, Jan Hendrik van der Westhuizen now explores his Cape-Dutch, Huguenot and boerekos epicurean ancestry in France. Restaurant Jan in Nice has one Michelin star. He does this with tasty treats such as burnt butter honey buchu madeleines or mosbolletjies with Cape Seed loaf and whipped biltong, miso butter. He recently opened Jan Innovation Studio in Cape Town and plans a restaurant at Tswalu Kalahari Reserve.

We live in a world where facts and fiction get blurred
In times of uncertainty you need journalism you can trust. For only R75 per month, you have access to a world of in-depth analyses, investigative journalism, top opinions and a range of features. Journalism strengthens democracy. Invest in the future today.
Subscribe to News24
Related Links
We will blow R250m this festive season
Thousands of university students struggle for food
Fine food in the Special Economic Zone
Next on City Press
‘Complacency’ leads to new Covid-19 infections 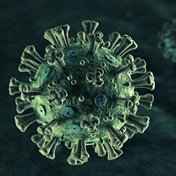 Read more on:
africachefcuisinefoodtraditional
Podcasts
Podcast | How to pay off your home and car