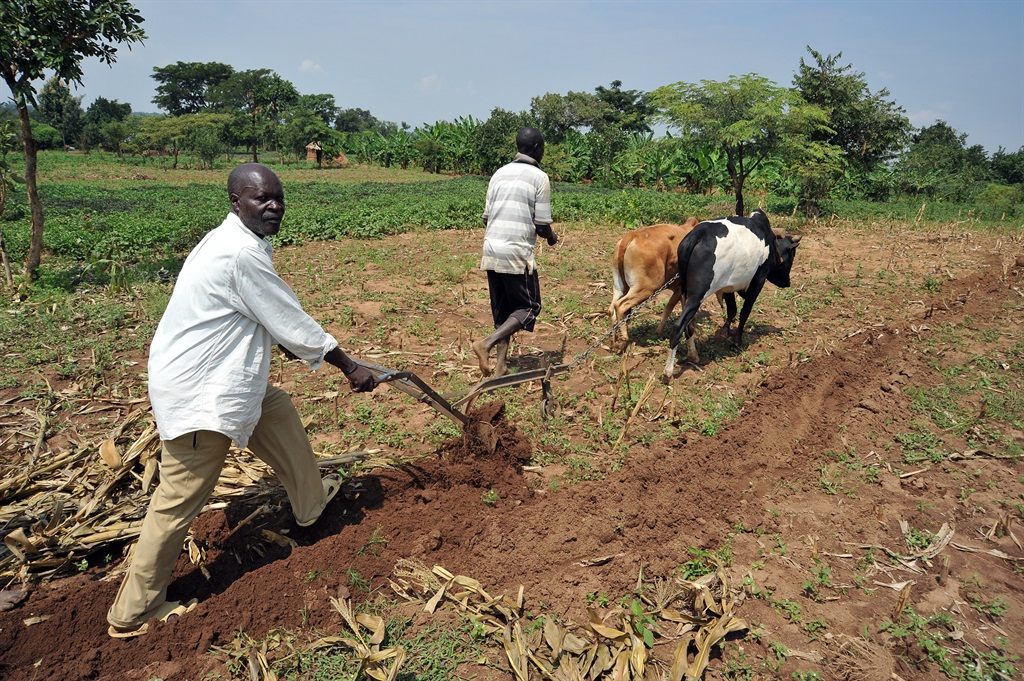 A farmer plows his field in Uganda as his son helps guide the team. The land is rich but lack of water is always a concern.Picture: iStock

African nations will struggle to grow their economies and combat poverty unless they tie high-level political will to government action to help farmers, agricultural experts said in Rwanda on Wednesday.

There is no economy in the world that has grown without its foundation rooted in agriculture as the engine.

Successfully using agriculture to push broader economic growth – as many nations in Asia have done – shows political support is “more important than seeds, weather and soil”, they added.

“There is no economy in the world that has grown without its foundation rooted in agriculture as the engine,” said Boaz Keizire, head of policy and advocacy at the Alliance for a Green Revolution in Africa, a non-profit organisation.

“Even the United States of America, China and all the Asian Tigers ... started with having a robust agricultural transformation and agricultural-led industrialisation,” Keizire told the Thomson Reuters Foundation.

He was speaking after the launch of the Alliance for a Green Revolution in Africa’s 2018 Africa Agriculture Status Report, which lauded Rwanda and Ethiopia as models in pairing political will with government action to transform small-scale farms into “poverty-fighting powerhouses”.

Opponents have criticised leaders of both countries for running what they describe as authoritarian states, raising questions about whether agricultural transformation might be more effective under strongman leaders.

Paul Kagame has been Rwanda’s president for 18 years, while Ethiopia has only this year begun releasing long-held political prisoners as part of a national reconciliation effort.

And he warned that failure to build public support for agriculture’s potential would delay the continent’s agricultural transformation by decades – or see it never realised.

Earlier this year, the African Union declared Rwanda to be the continent’s best-performing nation in terms of agricultural transformation.

Rwanda’s success is built in part on the increase in the number of registered cooperatives, which rose from about 2500 in 2010 to more than 8000 in 2018, according to the Rwanda Cooperative Agency, a public body.

In Rwamuzenga Marshland, which lies 140km south of the capital, about 4000 smallholder farmers in a local cooperative have successfully grown mealies on a more than 500-hectare stretch of wetland by planting sweet potatoes on the edges of raised soil beds to prevent erosion.

Boniface Nayigisiki, who heads the cooperative, said members had benefited from government efforts to help farmers work together in cooperatives “for easy access to credit, extension services and markets”.

The Alliance’s report, released at the Africa Green Revolution Forum in Kigali, said a quarter-century of growth in Ethiopia’s farm sector had halved rural poverty rates there, while Rwanda’s poverty had declined by a quarter in the same period.

It cited examples of agricultural transformation in other countries including China, whose rural poverty rate declined from 53% in 1981 to 8% by 2001.

And it noted that political momentum for and government capabilities to back agricultural transformation were improving in countries such as Kenya, Burkina Faso, Mali and Zambia.

It has allocated about 20 billion Kenyan shillings (about R3 billion) to boost food security and nutrition by 2022, said Henry Rotich, cabinet secretary for Kenya’s treasury.

An additional $24 million (about R371 million) will support manufacturing programmes, including some that would add value to agricultural products. Africa could still produce enough food despite a rising population and a changing climate.Picture: iStock

Mamadou Biteye, managing director of the Africa regional office for The Rockefeller Foundation – one of the Alliance’s funders – said change was also needed on the ground.

“Many times, the crops die next to a river stream because there is no rainfall. My message is that crops do not need rainfall, they need water,” he said.

David Phiri, the sub-regional coordinator for Eastern Africa for the UN’s Food and Agriculture Organisation, said the continent could still produce enough food despite a rising population and a changing climate.

“We’ve seen some of the worst droughts in the past two years in East Africa, but the impact to people was minimal. That means governments are becoming resilient,” he said.

And, he added, the continent would see life improve for many of its small-scale farmers if governments simply acted on more of the agreements that they signed.

“Signing an agreement is one thing. But implementing the same is another,” he said. – Thomson Reuters Foundation

We live in a world where facts and fiction get blurred
In times of uncertainty you need journalism you can trust. For 14 free days, you can have access to a world of in-depth analyses, investigative journalism, top opinions and a range of features. Journalism strengthens democracy. Invest in the future today. Thereafter you will be billed R75 per month. You can cancel anytime and if you cancel within 14 days you won't be billed.
Subscribe to News24
Related Links
Land reform is a success on this farm in Limpopo
How 24-year-old Mbalentle Sipengane became a successful farmer
The story of a workers’ farm
Next on City Press
Chief of staff denies deal to secure top government post