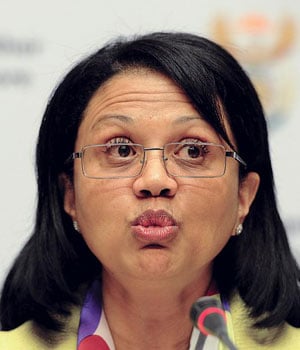 The department of agriculture, forestry and fisheries paid millions of rands to the Guptas’ media companies between 2011 and 2015.

The bulk of this amount – about R3.38 million – was paid out when Tina Joemat-Pettersson was minister. This included an amount of more than R300 000 for coverage of her budget speech. Joemat-Pettersson is currently minister of energy.

During the term of her successor, Senzeni Zokwana, only R36 265.79 ended up in the bank accounts of the Guptas family’s media companies.

This was revealed in written parliamentary replies from the ministry to questions from the Economic Freedom Fighters. The EFF asked the minister whether senior officials had done business with to “certain persons” – referring to Atul, Ajay and Rajesh Gupta and Duduzane Zuma, President Jacob Zuma’s son – and how much money they had paid to Gupta businesses. These include TNA Media, The New Age newspaper and Vusizwe Media, which publishes the magazine The Thinker.

Ajay Gupta is Vusizwe Media’s non-executive chairperson. The Thinker editor is Essop Pahad, who was minister in the presidency during former president Thabo Mbeki’s tenure.

According to Zokwana’s answer, the following amounts were paid during Joemat-Pettersson’s term:

During Zokwana’s term the following was paid:

Zokwana did not answer whether he, his predecessor or any of the department’s officials met with “certain persons”.

We live in a world where facts and fiction get blurred
In times of uncertainty you need journalism you can trust. For only R75 per month, you have access to a world of in-depth analyses, investigative journalism, top opinions and a range of features. Journalism strengthens democracy. Invest in the future today.
Subscribe to News24
Related Links
State, banks to meet soon over Guptas
Guptas ‘backed’ Oros’ R140k monthly bond
The writing is on the wall for the ANC
Next on City Press
Frustration and confusion following North West hospital closure