Alex rebuilds, but hawkers left stranded after wares were seized for ‘making the place dirty’ A semblance of normalcy and calm seems to have returned to Alexandra. Photo: Rosetta Msimango

A semblance of normalcy and calm seems to have returned to Alexandra township in Johannesburg as residents move freely with no disruptions or scenes of violence, all under the watchful eye of the SA National Defence Force (SANDF).

However, those who operated as informal traders on the streets outside Pan Africa Shopping Centre prior to the week-long looting and destruction of last week find themselves in despair after they were told that they can no longer operate where they used to and their commodities were forcefully taken from them.

An attempt to organise and mobilise by 30 or so despondent traders was quickly dispersed by SANDF members patrolling the area, who told them that these kind of gatherings are not allowed.

“We are being treated like we are the looters. Maybe they think we are planning a loot as we meet like this, but it is not the case. But we do not blame them because of what has been happening,” informal trader Muzi Zwane* told City Press as an SANDF member yelled at some traders: “People are trying to clean here and you are making the place dirty.”

READ: Scores of Alex residents queue for bread and other essentials at the only mall in township untouched by unrest

Zwane told City Press that he had been trading in the area for a number of years and never had issues.

“We do not even know who the people who took our goods are. They just said they are cleaning up and that they do not want people here. So what could we do? They took everything.”

Zwane said he did not know what he would do next because trading was his only source of income.

“I have been selling here for about five years and now I am told that I cannot. All this because of the looting that has taken place. The people who took our goods said that they are cleaning up and we are dirtying the place.”

In the parking area of the Pan Africa Shopping Centre, which last week was reduced to a scene of ash and rubble, Alexandra community members were hard at work in clean-up operations.

Among them was 71-year-old Zanele Khahlela, who said she had been there “since about 8am because as a community member I felt it is my duty to play my role”.

With a walking stick in one hand, Khahlela said: “The place was beyond a mess when I got here. I could not believe my eyes. In my old age, I did the best I could.”

Member of the Gauteng legislature Sizakele Nkosi-Malobane, who was also at the centre, said that community members “have come to volunteer in our efforts to clean up after all the looting that has happened”.

“We have also had community members offer their services in terms of coming to stand guard and protect the assets here, including this mall, which is one of the very few we have in Alex,” she said.

“We were delayed in terms of when we started because we had to wait for the insurer to come and assess the damage before we could start cleaning. They then told us that today we could begin with the exterior. Tomorrow we will move to the interior.”

“People have come out to assist in getting our community back to what it was and they are doing it voluntarily. While we do offer them lunch, this is not a form of payment. People cannot work on an empty stomach,” said Nkosi-Malobane.

“My children and I prepared meals for those who have taken it upon themselves to come and help clean the communities and who spend nights guarding and protecting the malls and other valuable spaces.”

“They are already doing their part and this was the least I could do instead of just sitting at home doing nothing.”

Having grown up in an orphanage, Semenya told City Press that for her the scenes of looting were “evidence that people are hungry”.

“Things are not okay in our country. Both the elderly and the young are hungry. Nobody would just leave their house to go and loot things like cabbage or rice and oil.” 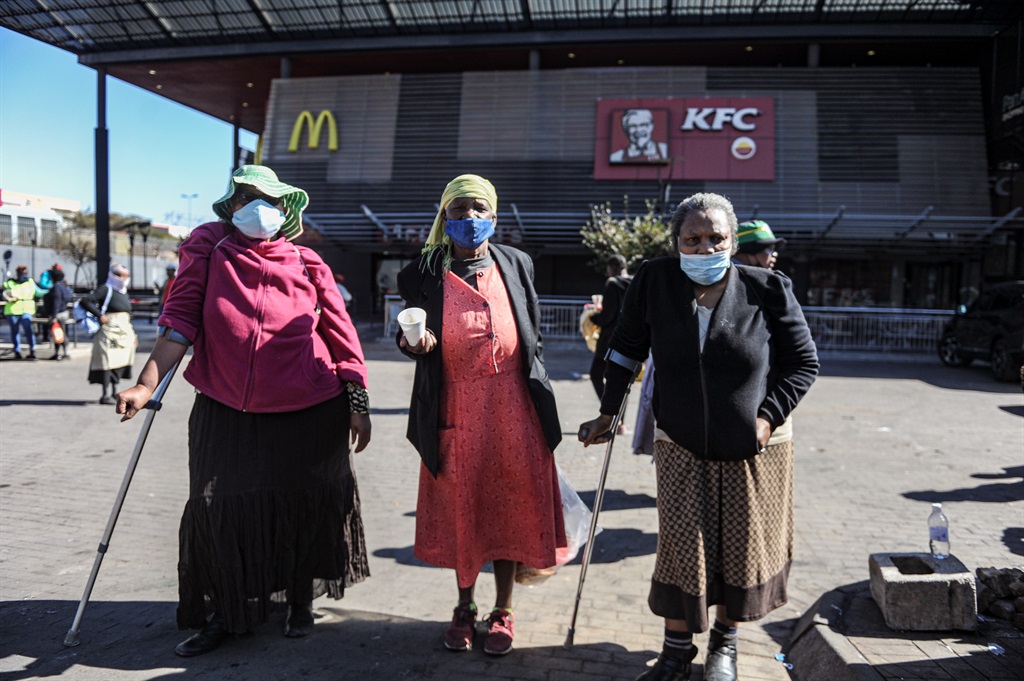 Those who operated as informal traders on the streets outside Pan Africa Shopping Centre prior to the week-long looting and destruction of last week find themselves in despair. Photo: Rosetta Msimango

However, she explained that those she was speaking of were “those who took necessities such as maize meal, cooking oil and other basic food stuff, not people who were seen carrying fridges on their backs”.

“These young men and women are unemployed and that is part of what pushed some to go and seek these necessities. I can understand this as someone who would sometimes go three to four days without food,” she said.

Employers, meanwhile, are chipping in too. The manager of Roots Butchery across the shopping centre said their employees were “being taken care of, that I can confirm”.

This after the employees thought they would no longer be receiving an income and would remain jobless after their store was looted and vandalised.

While employees of Roots Butchery are unable to carry out their daily duties as cashiers, packers or meat cutters, Roots employees have also stepped in to help clean up the butchery.

“We could not just let people stay at home,” the manager said.