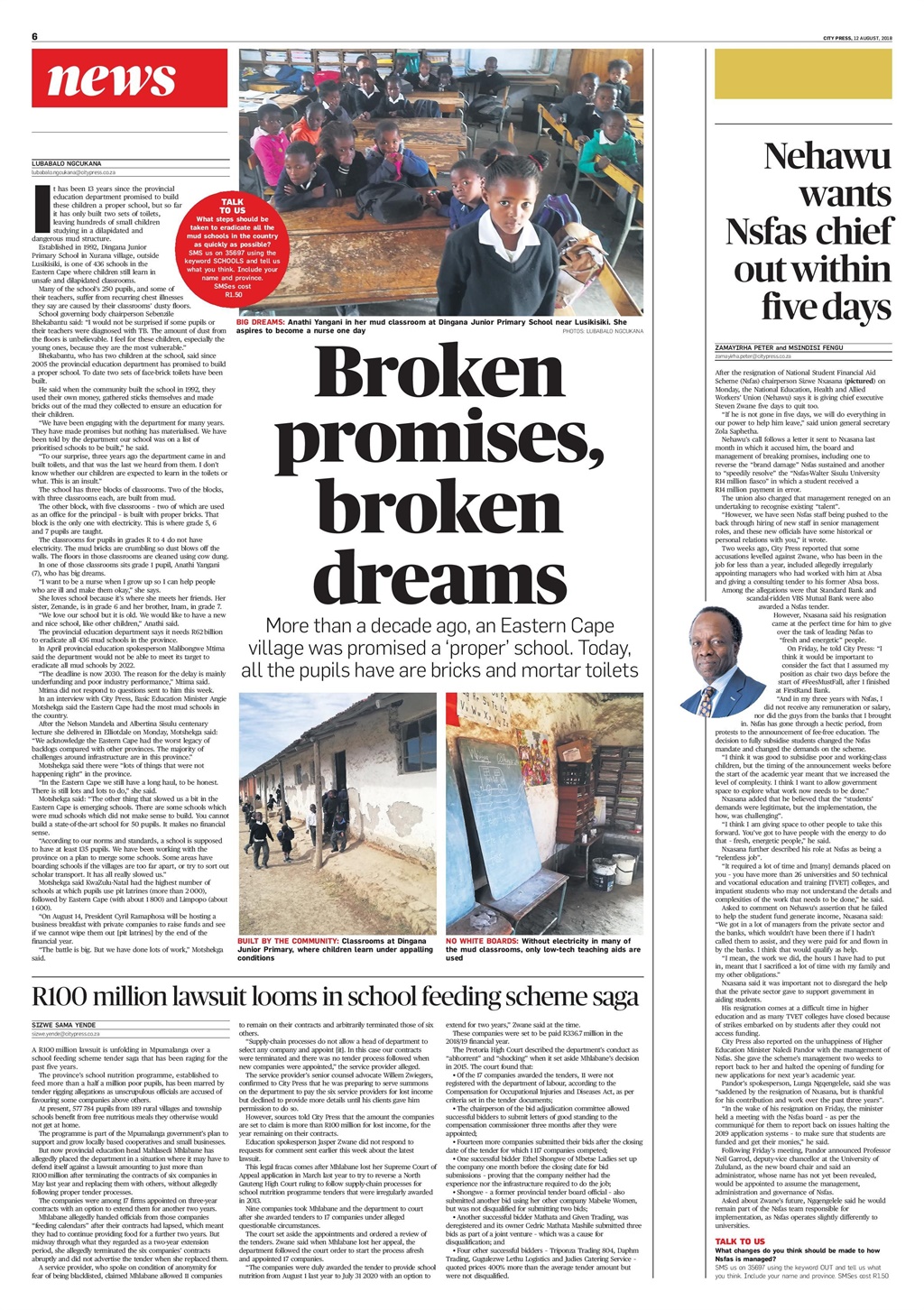 On August 12 2018 City Press told the story of 7-year-old Anathi Yangani and her fellow pupils at the Dingana Junior Primary School near Lusikisiki.

It has been 13 years since the provincial education department promised to build these children a proper school, but so far it has only built two sets of toilets, leaving hundreds of small children studying in a dilapidated and dangerous mud structure.

Established in 1992, Dingana Junior Primary School in Xurana village, outside Lusikisiki, is one of 436 schools in the Eastern Cape where children still learn in unsafe and dilapidated classrooms.

Many of the school’s 250 pupils, and some of their teachers, suffer from recurring chest illnesses they say are caused by their classrooms’ dusty floors.

School governing body chairperson Sebenzile Bhekabantu said: “I would not be surprised if some pupils or their teachers were diagnosed with TB. The amount of dust from the floors is unbelievable. I feel for these children, especially the young ones, because they are the most vulnerable.”

Bhekabantu, who has two children at the school, said since 2005 the provincial education department has promised to build a proper school. To date two sets of face-brick toilets have been built.

He said when the community built the school in 1992, they used their own money, gathered sticks themselves and made bricks out of the mud they collected to ensure an education for their children.

“To our surprise, three years ago the department came in and built toilets, and that was the last we heard from them. I don’t know whether our children are expected to learn in the toilets or what. This is an insult.”

The school has three blocks of classrooms. Two of the blocks, with three classrooms each, are built from mud.

The other block, with five classrooms – two of which are used as an office for the principal – is built with proper bricks. That block is the only one with electricity. This is where grade 5, 6 and 7 pupils are taught.

The classrooms for pupils in grades R to 4 do not have electricity. The mud bricks are crumbling so dust blows off the walls. The floors in those classrooms are cleaned using cow dung.

In one of those classrooms sits grade 1 pupil, Anathi Yangani (7), who has big dreams. “I want to be a nurse when I grow up so I can help people who are ill and make them okay,” she says. Anathi Yangani in her mud classroom at Dingana Junior Primary School near Lusikisiki. She aspires to become a nurse one day. Picture: Lubabalo Ngcukana
City Press

She loves school because it’s where she meets her friends. Her sister, Zenande, is in grade 6 and her brother, Inam, in grade 7. “We love our school but it is old. We would like to have a new and nice school, like other children,” Anathi said.

The provincial education department says it needs R62 billion to eradicate all 436 mud schools in the province.

In April provincial education spokesperson Malibongwe Mtima said the department would not be able to meet its target to eradicate all mud schools by 2022.

“The deadline is now 2030. The reason for the delay is mainly underfunding and poor industry performance,” Mtima said.

Mtima did not respond to questions sent to him this week. In an interview with City Press, Basic Education Minister Angie Motshekga said the Eastern Cape had the most mud schools in the country.

After the Nelson Mandela and Albertina Sisulu centenary lecture she delivered in Elliotdale on Monday, Motshekga said: “We acknowledge the Eastern Cape had the worst legacy of backlogs compared with other provinces. The majority of challenges around infrastructure are in this province.”

Motshekga said there were “lots of things that were not happening right” in the province. “In the Eastern Cape we still have a long haul, to be honest. There is still lots and lots to do,” she said.

Motshekga said: “The other thing that slowed us a bit in the Eastern Cape is emerging schools. There are some schools which were mud schools which did not make sense to build. You cannot build a state-of-the-art school for 50 pupils. It makes no financial sense.

“According to our norms and standards, a school is supposed to have at least 135 pupils. We have been working with the province on a plan to merge some schools. Some areas have boarding schools if the villages are too far apart, or try to sort out scholar transport. It has all really slowed us.”

Motshekga said KwaZulu-Natal had the highest number of schools at which pupils use pit latrines (more than 2 000), followed by Eastern Cape (with about 1 800) and Limpopo (about 1 600).

“On August 14, President Cyril Ramaphosa will be hosting a business breakfast with private companies to raise funds and see if we cannot wipe them out [pit latrines] by the end of the financial year.

“The battle is big. But we have done lots of work,” Motshekga said.

We live in a world where facts and fiction get blurred
In times of uncertainty you need journalism you can trust. For 14 free days, you can have access to a world of in-depth analyses, investigative journalism, top opinions and a range of features. Journalism strengthens democracy. Invest in the future today. Thereafter you will be billed R75 per month. You can cancel anytime and if you cancel within 14 days you won't be billed.
Subscribe to News24
Related Links
Collapsing mud school a danger
Murky, muddy and void of schools as provincial government can’t fulfil its promise
Next on City Press
Marikana workers plan to put Ramaphosa in the dock in a civil claim