Employees and business owners in Gauteng have been left in despair after their livelihoods were gutted by the ongoing looting and vandalism of shops and malls across the province.

On Tuesday morning, workers at stores in Diepkloof, Soweto, and Vosloorus in the east of Johannesburg were met with empty stores bearing the marks of violent break-in when they reported for duty.

“We knew they were looting, but we thought we should show up for work to salvage whatever we could. All we found was a flooded store without a single item in sight,” said the manager of Mr Price Diepkloof Square. 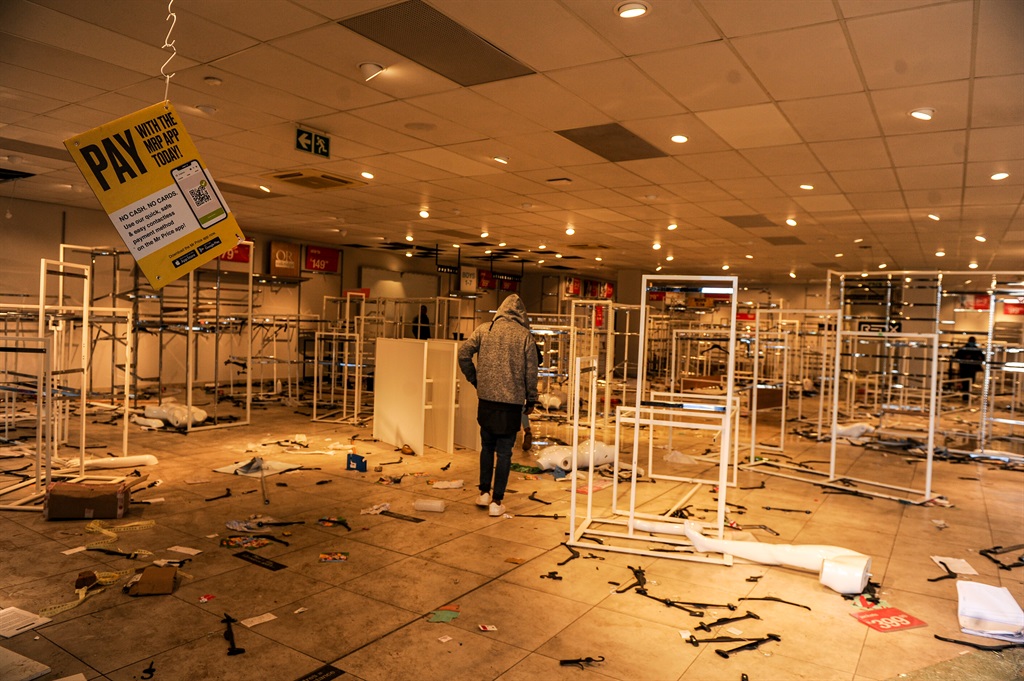 One employee at the clothing retailer told City Press: “I am greatly disappointed by this. It hurts.”

Meanwhile, just outside the store, tear gas permeated the air as members of the SA Police Service (SAPS), together with those of the SA National Defence Force (SANDF), apprehended individuals suspected of taking part in looting and public violence.

What is left here is mostly ... things that are useless. These people knew exactly what they were taking.
Javes Asif, business owner

Riots which began as protests against the 15-month imprisonment of former president Jacob Zuma for contempt of court quickly turned into violence, looting and even extortion.

Business owner Javes Asif (41) said he was saddened by the chaotic scenes of criminality and opportunism after his three shops at Chris Hani Crossing in Vosloorus were ransacked, costing him “at least R400 000” in lost stock and damaged property.

While law enforcement and community members in the area faced off, with the latter attempting to continue looting and Ekurhuleni Metro Police Department officers firing rubber bullets and grenades at the crowd in an effort to disperse them, Asif and some of his employees attempted to salvage whatever they could.

“What is left here is mostly ... things that are useless. These people knew exactly what they were taking,” he said.

“All our cellphones and other accessories such as cables were taken. A number of monitors and printers [were taken too]. All the expensive things.”

The business owner said he had just received stock “worth about R180 000 for this specific shop”.

“I have owned businesses in this complex for about 11 years. I have never seen anything like this. And we cannot say it is xenophobia because everyone is affected.”

One of his employees, Luwambo Rabonda (38), said she was “stressed about this because I am now left without a plan or job”. “Yesterday I did not come to work because of all the violence that was happening, but this morning I decided to come and this is what I found,” she said as she gestured the little that was left of their merchandise.

Rabonda has three children and she financially supports her mother as well.

According to a statement released by ministers from the justice, crime prevention and security cluster on Tuesday morning, “757 people have been arrested”.

“In KwaZulu-Natal a total of 304 and in Gauteng 453,” said Police Minister Bheki Cele.

“The total number of fatalities that have been reported is 10, with four in KwaZulu-Natal and six in Gauteng.”

Gauteng Premier David Makhura later on Tuesday confirmed that the death toll in the province had risen to 19.

Ten people died during a stampede in Meadowlands. The cluster issued a stern warning to those circulating inflammatory messages on various social media platforms “which are aimed at inciting violence and disregard of the law”.

On Tuesday morning the streets of Soweto and Vosloorus were barricaded with bricks while looting continued at stores that still had some merchandise.

“The NatJoints has intensified deployments in all the affected areas in KwaZulu-Natal and Gauteng, and these will be augmented by the SAPS’ measures being put in place to call up operational members from leave and rest days to increase the presence of law enforcement personnel on the ground,” Muridili said.

Listen to our latest podcasts.
Voting Booth
Were the knee-jerk travel bans imposed on SA following our detection of the Omicron variant necessary?
Please select an option Oops! Something went wrong, please try again later.
We are being punished
48% - 30 votes
Rather safe than sorry
29% - 18 votes
They have every right
23% - 14 votes
Previous Results
The best of 2020
Can you guess who featured in our most popular articles from 2020?