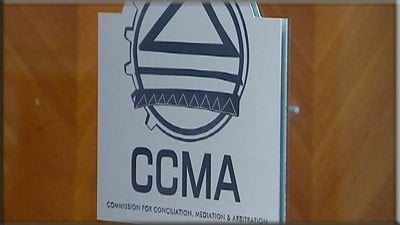 The CCMA has given the ANC in the North West 14 days to pay two officials their outstanding salaries of 11 months totaling R360 000 by December 23.

Earlier this month Tebogo Kock and Daddy Leshomo took the governing party to the CCMA, after failing to get the ANC to pay their salaries due since January this year.

The commission awarded Kock and Leshomo R180 000 each.

In another case, the CCMA ordered the ANC’s Getrude Mphekwa House in Mafikeng to pay a further R135 000 in salaries owed to Oupa Matla by January 3 next year. Matla headed the communications department of the provincial headquarters ahead of the May 8 general elections.

Matla’s award was granted on Thursday, and just like in Kock and Leshomo’s case, the ANC did not oppose the CCMA, giving the applicants a default judgment.

During Kock and Leshomo’s hearing, the ANC’s lawyer left the proceedings after the commissioner overruled his objections.

“In the absence of the respondents, I could not get any justification of its actions, and I’m of the view that it owed the applicant salary for July last year to May this year, minus the R30 000 deposited on May 3,” commissioner Mooketsi Molamu found in Matla’s case.

“In the circumstances and given the absence of the respondent party, the applicant’s version remains unchallenged and probable,” said commissioner Tebogo Kujane in the Kock and Leshomo’s award.

We live in a world where facts and fiction get blurred
In times of uncertainty you need journalism you can trust. For only R75 per month, you have access to a world of in-depth analyses, investigative journalism, top opinions and a range of features. Journalism strengthens democracy. Invest in the future today.
Subscribe to News24
Related Links
CCMA deals with record number of cases
CCMA faces R80m claim over bungled tender
Justice and tears for former EFF staffer after assault
Next on City Press
Matrics set to rewrite leaked papers