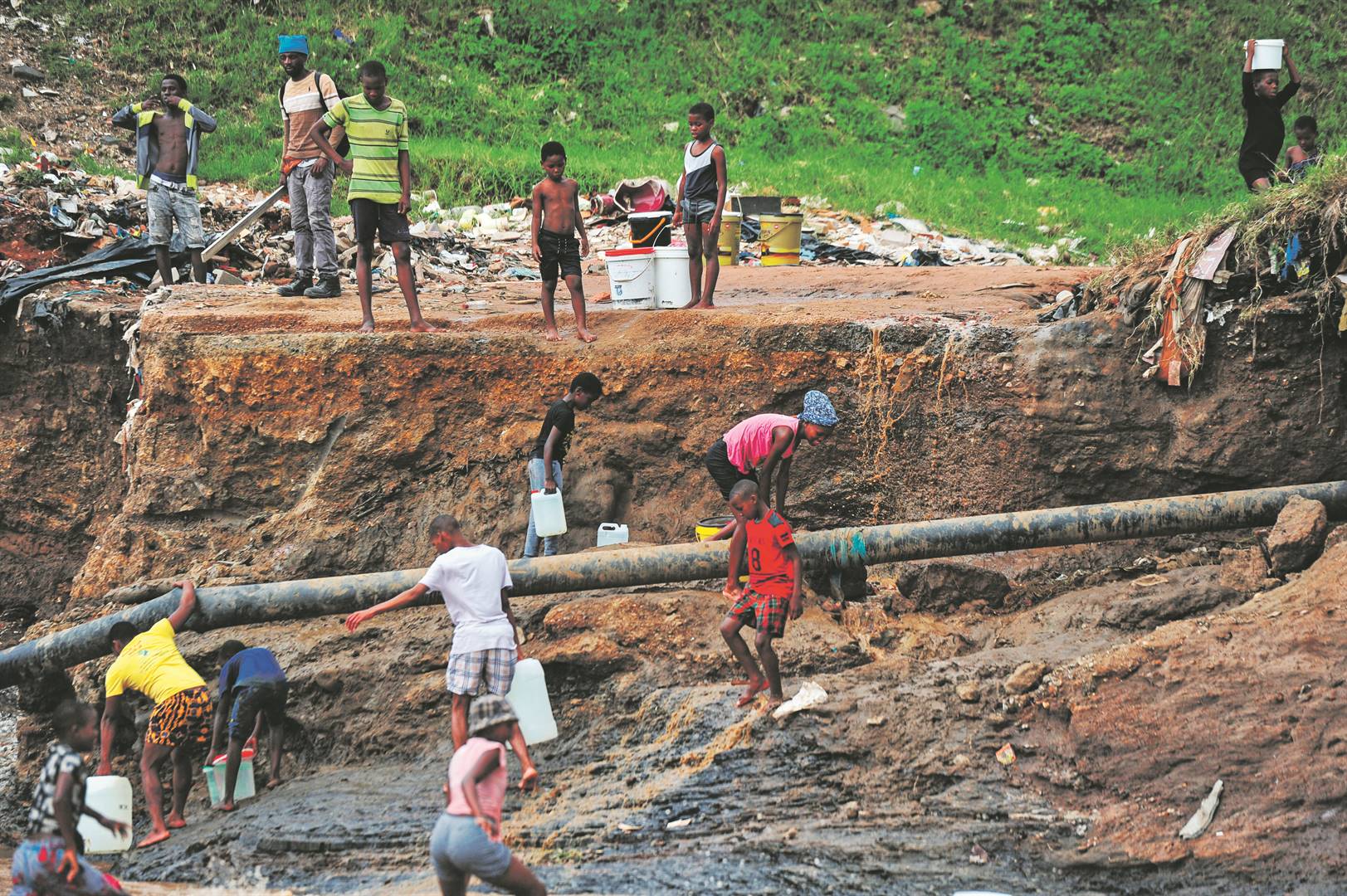 People fill buckets with water from a burst pipe that was damaged by the floods in Durban this week. Photo: Rosetta Msimango

“Clean water is now the biggest crisis facing everyone,” says Dr Gideon Groenewald, chief geologist at Gift of the Givers.

“People are coming in on their boats. They mainly distribute water. You have to remember, all those sewerage pipes are down, sewage is flowing everywhere. There’s a great danger of diseases like cholera.”

And while Gift of the Givers and other organisations such as the National Sea Rescue Institute jumped in from the start to assist stranded people, help from the SA National Defence Force was slow in coming.

In one case, 52 schoolchildren in Folweni were trapped by floodwaters in their school building overnight. The air force had no rescue helicopters available by Tuesday, and Discovery, Transnet and the police finally brought them to safety.

On Wednesday, army chief General Rudzani Maphwanya said that they had brought resources from other provinces on Tuesday night after 15 squadrons and the police air wing in Durban itself suffered flood damage. Photos were circulated on social media showing air force and police helicopters stranded in deep water in flooded aircraft sheds.

“But one helicopter was ready in Durban by Wednesday morning to help,” said Maphwanya.

eThekwini’s emergency services and local businesspeople also stepped in to make roads passable in order to evacuate injured people and corpses, as well as bring in supplies.

Anton Müller, a businessperson and community leader in Umhlanga, said:

Clean water, food and shelter are necessities in many of the areas. In the midst of all the floodwaters, water pipelines were destroyed.

READ:‘Dodgy’ water in our pipes

According to him, the riots in July last year helped create community networks that are now operational again.

“In our area, there’s a network of businessmen, private security companies, emergency services, paramedics, plumbers and electricians. Everyone works together.

“We work shoulder to shoulder and dig holes where water’s dammed up and people’s belongings are under water. That’s how we make things work,” said Müller.

Umgeni Water, which is responsible for the water supply to eThekwini, said some of its water pipes that convey sewage were destroyed in Inanda. It is also unable to pump water from the Mtwalume River on the South Coast or from the Umzinto River Dam due to the floods.

According to Umgeni Water, the drinking water supply in the eThekwini, Ugu and iLembe districts is contaminated.

There are similar problems with the water purification systems that supply drinking water from the South Coast areas to Umzinto and Mtwalume, Umgeni Water said.

In terms of rescue operations, it was nearly impossible for emergency services to reach certain areas for days after the storm. Roads turned into rivers and numerous bridges were washed away.

Helicopters could not fly due to the weather conditions and poor visibility. All these factors together made it “the perfect disaster”, said Müller.

It was also difficult to coordinate emergency services because cellphone networks were under pressure after fibre cables were washed away and power outages occurred at towers. Back-up batteries at the towers could not be recharged, according to a statement from MTN.

Durban South, the South Coast, Umlazi, Malagazi, Amanzimtoti, Ballito and Salt Rock were among the areas where recovery teams struggled to gain access to carry out repairs, due to the impassable roads.

A senior manager of a large security company that serves the port area, among other places, told City Press that he could not even find out where some of the guards were and whether they were in fact safe.

“We have to guard large factories and businesses, as well as buildings in the port area, but our guards can’t get to work or they’re struggling to keep their own homes and families safe. Many lost family members in the floods. This can leave businesses vulnerable.

“Vehicles that have to provide shops with fresh supplies of food can’t move freely, so in many of the informal settlements there isn’t even bread available,” he said.

Looting, theft and other crimes – partly out of desperation – have occurred in the past week. In Umlazi, 12 people were arrested after breaking into a wholesaler and carrying out supplies.

READ: KZN schools shut for a week after devastating floods

According to Maphwanya, the army will help with things like relocating emergency supplies and personnel. Army engineers will also be available to repair bridges and supply routes.

People fill buckets with water from a burst pipe that was damaged by the floods in Durban this week. Photo: Rosetta Msimango

Meanwhile, government announced on Friday that R1.5 billion would be made available for disaster relief in this region.

Human Settlements Minister Mmamoloko Kubayi said R1 billion would be redistributed from the housing budget. According to her, a preliminary estimate of the damage shows that 13 500 households were affected. Nearly 4 000 homes were destroyed and 8 097 were partially destroyed. – Additional reporting by Marzahn Botha