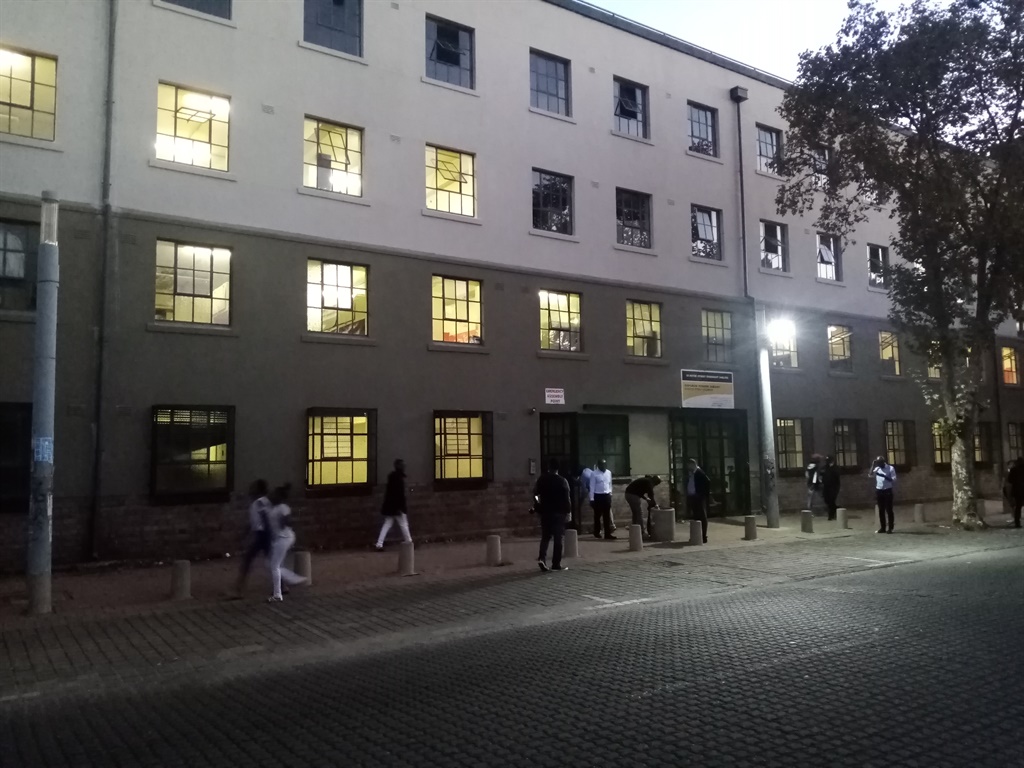 The No 3 Kotze Street homeless shelter in Hillbrow received the green light from MEC Panyaza Lesufi on Thursday evening to house homeless people for the duration of the national lockdown period. Picture: Molebogeng Mokoka

Panyaza Lesufi, the acting MEC for social development, gave an overnight shelter in Hillbrow, Johannesburg, the green light to house homeless people, just hours before the implementation of the 21-day national lockdown on Thursday night.

The lockdown, announced by President Cyril Ramaphosa on Monday, is part of the precautionary measures being implemented to combat the spread of the Covid-19 coronavirus.

It will be effective until April 16.

The shelter, at No 3 Kotze Street, opened its doors 10 years. It is one of the shelters selected by the Gauteng department of social development to temporarily house homeless people during the national lockdown.

I’m not where I want to be. But I’m in a better place than where I was before
Ralston Phepeng, a volunteer at the the shelter

Lesufi said he was satisfied with the conditions at the shelter and gave it permission to take in the city’s needy. However, some in the shelter are looking for more than just a place to stay during these uncertain times.

A place of restoration

City Press spoke to Ralston Phepeng (34). He works for the Extended Public Works Programme (EPWP) and also volunteers at the shelter.

Phepeng said he has been off drugs and alcohol abuse for nine months.

“I had a problem with substance abuse. I came here in March last year because I heard that they help people with such problems. It was hard at first because I was dodging a lot, but I went to rehab and came out clean, Phepeng said.

“When I came out it was a case of what am I going to do [with my life]. So I decided to help around the shelter. I started speaking to people who were going through rehab and telling them about the challenges I faced so that they’d feel encouraged to overcome their problems,” he said.

Phepeng said the shelter helped him become a productive member of the community.

“I have a family but when you’re on [addicted to] substances you end up not communicating very well with your family. I’m now employed, and although I earn a stipend, I’m not where I want to be. But I’m in a better place than where I was before,” he said.

“I finally see a lot more years ahead of me, and I can cope without using substances.”

Helping people overcome substance abuse is one of the social services the shelter offers.

Allen Grobbler, the director of migration, children and the displaced at the shelter, said while they continue to help the homeless through the process of rehabilitation, thery face challenges in other areas.

“We need help with outreach [programmes]. We’ve identified hotspots for substance abuse and chemical dependence [in the city], and we need volunteers to go and encourage those [people] on the streets.

“We’re grateful for the support we have [received] but we need more help from NGOs and businesses,” he added.

Phepeng is not the only one who is giving back to the shelter that helped him. Xolani Nkosi (31), a former EPWP employee, also volunteers here.

“I was once homeless and was helped by another guy who was also on the street. He showed me this place and I’ve been here since.

“I volunteered for two years before being employed by the EPWP. When my contract ended, I came back to volunteer. I have a passion for people and my past inspires me to help others,” Nkosi said.

A passion to help others seems to be a driving force among the volunteers, but so is the prospect of securing a better future. Mcedisi Mhlogo (27) is one of them.

RT @molebogeng44: "Please wash your hands for at least 20 seconds"

A qualified sound engineer who is also a singer, songwriter, composer, producer, Mhlogo said his goal is to get back on his feet and pursue his dreams in entertainment.

“The shelter is not a hotel, it’s not a place to be comfortable in because chances are that there’s someone on the streets who wants to get that same opportunity as you. I gave myself three months, at least until after the Covid-19 crisis passes.

“After that I’m going back to my hustle. My dream is to be out of here and rebuild my life. The shelter has given me a headstart towards doing that,” he told City Press.

However, not everyone at the shelter is a recovering addict. Phepeng said: “Some people are working, they’re just looking for a place to stay, but that is based on an agreement made with the social workers.

“This is not a place that you can come and be helped financially, but you will have a bed and food.”

Is the shelter lockdown ready?

Mhlongo, one of the volunteers, said: “The shelter is for everyone and it was sanitised [before people moved in]. The challenge we could be facing during the lockdown is that some people who are using substances might experience downs or withdrawals.

“It’s understandable because they will not be able to go anywhere [to get high], but management is willing [to] help.”

“We will be able to accommodate the issues that come up during the lockdown. I’m also glad that the MEC [Lesufi] approved and pledged to support the shelter. Homelessness is growing. It is not the city’s problem, it is everyone’s problem,” he said.

We live in a world where facts and fiction get blurred
In times of uncertainty you need journalism you can trust. For only R75 per month, you have access to a world of in-depth analyses, investigative journalism, top opinions and a range of features. Journalism strengthens democracy. Invest in the future today.
Subscribe to News24
Related Links
How do we save SA?
Covid-19 lockdown: Be a force of kindness, not of might, Ramaphosa tells SANDF
Hours before lockdown, prison staff don’t know if they should report for work
Next on City Press
Ex-councillor released on bail, former MEC’s double-murder case postponed

Listen to our latest podcasts.
Voting Booth
Were the knee-jerk travel bans imposed on SA following our detection of the Omicron variant necessary?
Please select an option Oops! Something went wrong, please try again later.
We are being punished
48% - 97 votes
Rather safe than sorry
30% - 60 votes
They have every right
23% - 46 votes
Previous Results
The best of 2020
Can you guess who featured in our most popular articles from 2020?