Digruntled Clover employees: ‘They are importing milk from occupied territories in Palestine’ So said Christo Rantete, a general worker at Clover, as scores of disgruntled Clover workers staged a protest outside Clover Park in Roodepoort on Thursday. The 40-year-old said the Clover employees deserved better as workers who had “built this company from scratch”.

We took it to where it is now. We feel that we have been treated badly especially when those restructuring measures are not applied at the top executive level. They only want to implement salary cuts for workers in lower positions,” said Rantete.

This week’s picket came amid an unwelcome visit by the dairy giant’s Israeli shareholder. The General Industries Workers Union of SA (Giwusa) was marching against the Israeli Central Bottling Company, which owns Milco SA, a majority shareholder of Clover.

The workers strongly disapprove of the offered wage cuts as an alternative to Clover’s planned retrenchments. The protracted protest is as a result of collapsed salary negotiations between unions, Clover management, and the department of trade, industry and competition on retrenchments and wage cuts.

“After 30 years of working at Clover, an employee earns between R10 000 and R13 000 and they want to cut that by 60%. That would bring their salary down to between R6 000 and R8 000. Imagine someone living in a shack in Tembisa, in the best-case scenario, a backroom, and having 10 dependants on that salary. How can we agree on such a settlement?” questioned Giwusa president Mametlwe Sebei.

Striking Clover workers flocked the main entrance at the head office. Clad in their red union T-shirts, they picketed and sang while heavily armed security guards manned the gates and police vans parked on the side of the road. The Food and Allied Workers Union and Giwusa embarked on a strike against the dairy giant on November 22 last year over austerity measures that would see Clover employ fewer workers who would be required to work longer hours for less money.

“How do you put food on your table when Clover is bought over by an Israeli company that then comes into our country and retrenches workers, closes factories and, instead of buying milk from our farmers, they are importing milk from occupied territories in Palestine?” asked Rajah.

She said they saw the strike as one struggle – a fight against imperialism. She said:

We will always be where there is a fight by the workers for a living wage. Millions of people are unemployed. We as the working class can’t keep up. We are being squeezed from all sides. 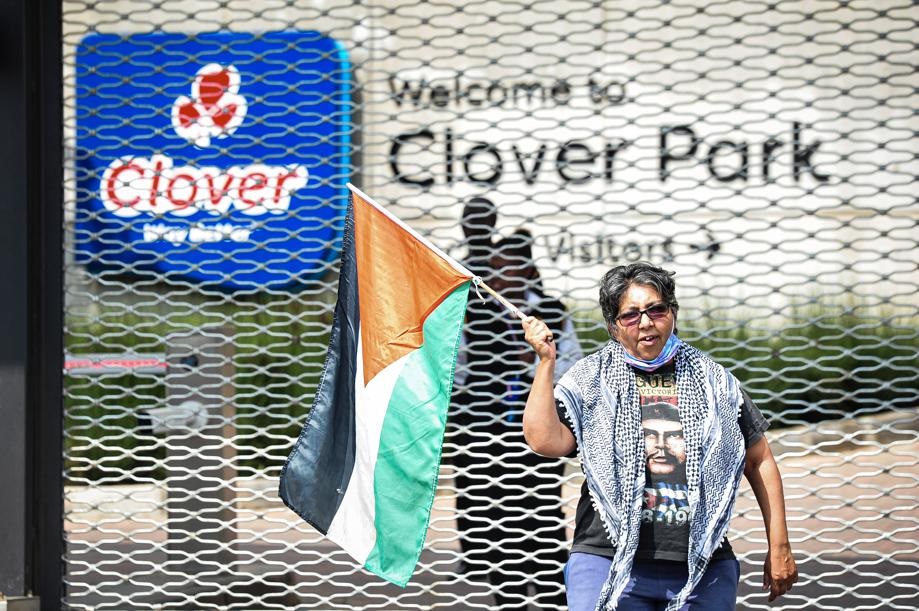 More than 250 Clover workers have now occupied the offices of the Industrial Development Corporation (IDC) to demand that they buy out the Central Bottling Company/Milco of Clover.

The workers are requesting financial support as they sleep over at IDC offices in Sandton.

Breakdown of negotiations between Clover and unions

Clover group manager legal and secretarial Steven Velthuysen said the negotiations between Clover and unions were far from being settled. The company participated in four meetings initiated by Employment and Labour Minister Thulas Nxesi over the past two weeks.

Unfortunately, the meetings ended in another stalemate. We again reiterate our previous calls that the union leadership showed no bona fide intent to settle this current wage dispute. The company again showed its commitment by presenting further concessions – but, again, these were outrightly rejected by the unions,

He added that the Giwusa president and its general secretary, John Appolis, did not attend the last two meetings and did not extend any apologies for not doing so. “It is clear that the striking employee’s interest is not their main priority.”

When asked about the meeting with the Israeli Central Bottling Company, he said no such meeting had taken place and Clover did not know where the union had received that information from.

Velthuysen dispelled allegations of Clover’s importation of milk and called them absurd. “We buy our milk from Dairy Farmers of SA, which procures the milk from local farmers.”

“Despite a liberal labour legislative regimen and active and vibrant trade unionism, workers still face many challenges. A typical example that demonstrates how far we are as a country in our efforts to address workers’ social, economic and political challenges is how workers – particularly those at malls – are expected to spend their lunch breaks under trees.”

Matebesi said another concern for workers was that unions had become too close to or entangled in politics.

As a result, our unions have become weaker over the years.

He added that unfortunate events, such as the Marikana tragedy, were bound to be repeated because the priorities of union leaders were elsewhere. Matebesi explained that violence becomes a norm during strikes when the strikers encounter attempts to restrict and suppress their industrial action.

“This is mainly when the police become heavy-handed in their approach to suppress the strike. We should also consider the role of social media in generating outrage.”

Matebesi added: “The longer any strikes take, the more emboldened and frustrated the strikers become. Often, group dynamics take over where strikers, who are on their own, will never participate in violent acts, suddenly see violence as an alternative to peaceful demonstrations.”