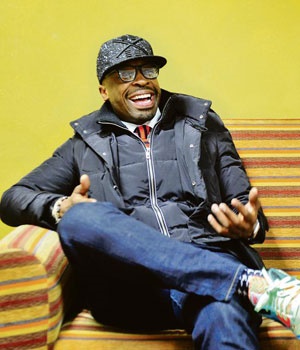 Barely six months after he ruffled Forbes Africa’s feathers with a fake magazine cover, Sibusiso “DJ Sbu” Leope has teamed up with the prestigious business magazine to launch a new TV show.

Kicking Doors with Sbu Leope launched on CNBC Africa this week. The 30-minute show focuses on entrepreneurship, leadership and empowerment.

Leope says he pitched the idea to Forbes Africa while they were embroiled in a battle over a mock Forbes cover showing him holding a can of his Mo Faya energy drink in March.

Leope told them that instead of focusing on the fake-cover incident, they should see it as a great opportunity to work together.

“I was very honest with them that I felt they were not speaking to the people on the ground. They always target wealthy businessmen dressed in suits and ties. I also suggested that the only people who watched CNBC Africa were either white people or rich people,” he says.

Leope believes Forbes Africa bought into his idea because of the publicity the mock cover generated.

“This is a ground-breaking deal. I have always wanted to speak to the continent. I’ve always wanted to mingle with businesspeople because I’m a businessman myself. These are global brands and everyone respects them worldwide, and to have a partnership with them means a lot to me,” he says.

“I’m living proof of what my show is all about. I’m a struggling entrepreneur. I’ve got challenges all the time, but I kick down doors, I make things happen.”

Leope says that having his own show has been a lifelong dream.

“I pitched the same idea at the SABC for years and it just never happened.”

Kicking Doors with Sbu Leope is designed to educate and inspire growth within the “billionaire generation” in Africa. There are 52 episodes.

Leope, who was fired by Metro FM for promoting his energy drink on stage at the Metro FM Music Awards in February and after being arrested for drunk driving in May, says bad publicity hasn’t dented his image.

“The more you write about me, you make me popular. Many people know that I’m not the person the media has portrayed me to be. People know my work is sincere and I have changed many people’s lives. I’ve got an army of loyal followers,” he insists.

He also does not rule out a return to Metro FM.

“SABC will always be my home. I want Metro FM breakfast or even a drive show. I’ve got a lot to offer, and they know that as well.”

But for now, he is concentrating on his new show and his second book, Billionaires Under Construction – The Billionaire Generation, which will be published this year, and masked kwaito artist Mzekezeke will be making his comeback after nine years.

“In this book, I share my story and how I have manoeuvred over the years. It will touch base on the importance of education and how I managed to change many people’s lives through my work,” he says

We live in a world where facts and fiction get blurred
In times of uncertainty you need journalism you can trust. For only R75 per month, you have access to a world of in-depth analyses, investigative journalism, top opinions and a range of features. Journalism strengthens democracy. Invest in the future today.
Subscribe to News24
Related Links
DJ Sbu's new show gets major love from fans
DJ Sbu leads the line at 2015 South African of the Year Awards
DJ Sbu seems unfazed by the MoFaya drama
Next on City Press
SA to set up compensation fund to allay Johnson & Johnson concerns