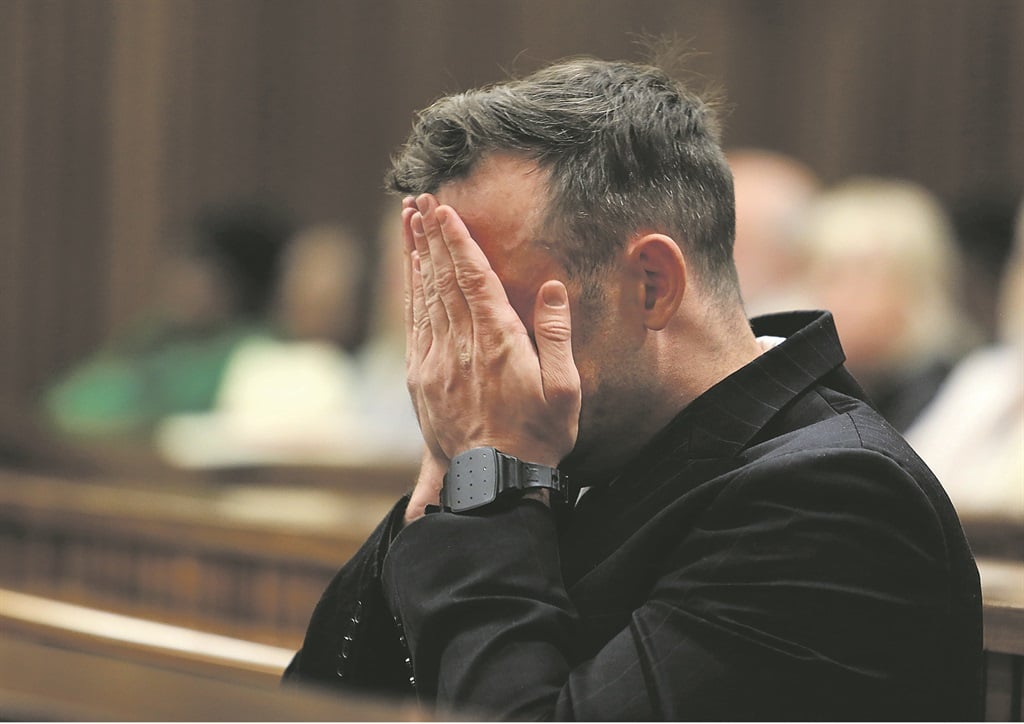 Oscar Pistorius at the North Gauteng High Court during the third day of his sentencing hearing. Pistorius was convicted for the murder of his girlfriend Reeva Steenkamp in 2013 PHOTO: ALON SKUY/ TIMES MEDIA GROUP

Oscar Pistorius was rushed to Pretoria’s Kalafong Hospital yesterday after sustaining injuries to his wrists in jail.

Two warders with knowledge of the hospital section said blades were subsequently found in Pistorius’ cell during a search yesterday afternoon.

Two security guards at Kalafong Hospital, which is situated east of Pretoria, told City Press yesterday that Pistorius was admitted at 12.30pm.

Pistorius’ father Henke said his son had been discharged from Kalafong Hospital, but he could not get through to the prison for an update on his condition.

Nxumalo said Pistorius was “attended to by our medical practitioners after falling off his bed”.

“He was assessed and transferred to hospital for further assessment and treatment. He is not yet back in our care as more scans are being conducted to detect possible internal injuries,” he said.

Pistorius’ hospitalisation follows an investigation at Kgosi Mampuru II Correctional Centre in Pretoria after warders raided his cell three weeks ago and allegedly found a pair of scissors, prescription drugs and “toxic pills” hidden inside it.

City Press has established from two warders, as well as an inmate, that the raid was conducted after authorities began to fear that Pistorius planned to harm the prison’s health manager and professional nurse Charlotte Mashobane, who testified against him at his sentencing proceedings and painted him as a violent person.

“They found a pair of scissors, [prescription] drugs and six anti depression pills hidden in his cell,” said the inmate.

This information is also contained in Pistorius’ prison “journal”, in which all incidents involving the prisoner are recorded.

Nxumalo confirmed an investigation into Pistorius was under way by a correctional services investigator, but refused to reveal further details because “the investigation is at the sensitive stage and revealing many details could affect the process”.

Department of correctional services commissioner Zacharia Modise confirmed to City Press two weeks ago that “pills” were discovered in Pistorius’ cell and that warders refused to give him additional medication the day they were discovered.

Contacted for comment, Pistorius’ advocate Barry Roux said he was not aware that his client was being investigated in jail.

Pistorius family spokesperson Anneliese Burgess said she knew nothing of the investigation, but said the allegations sounded “crazy”.

“We have, over the years, had to deal with many outrageous claims about Oscar that end up being devoid of all truth,” she said by email on Friday.

Prisoners are not allowed to be in possession of sharp objects, such as scissors, because they could be used in a violent act.

Evidence led at his sentencing hearing revealed that Pistorius was taking medication for anxiety and insomnia, as well as depression. Two prison officials told City Press that six unspecified pills were found in Pistorius’ cell. According to prison regulations, nurses administer individual doses of medicine, which the prisoner has to take immediately.

City Press has established that an investigator has been making daily visits to Pistorius’ cell. After the investigation is finalised, a report will be compiled and submitted to prison management.

A warder told City Press that prison nurses sparked the investigation after they became concerned that Pistorius might overdose on the additional pills inside his cell.

Another allegation, which forms part of the investigation into Pistorius, is that he has been receiving special treatment from some warders.

“He has in the past refused to eat prison food and some warders have been bringing him food from the outside,” said the warder. He also allegedly uses their cellphones to make calls.

“He is getting preferential treatment and this has already caused division among warders.”

In response, Nxumalo said: “What is brought before us are serious allegations [and] we have decided that it will be proper to institute an internal investigation to establish the facts. It is therefore prudent that we allow this investigation to take place, and its findings will assist us in responding accordingly.”

The warders and the inmate said that Pistorius had asked to be transferred to Zonderwater Prison, east of Pretoria, but the request was denied.

The prison made headlines in 2014 when the so-called Waterkloof Four – consisting of Reinach Tiedt, Gert van Schalkwyk, Christoff Becker and Frikkie du Preez – who were sentenced to 12 years each for murdering a homeless man, were released on parole after serving a quarter of their sentences.

The correctional services department successfully appealed the ruling and suspended the parole board after what was described as an “erroneous decision”.

Pistorius’s problems with the law are far from over.

Two weeks ago, the National Prosecuting Authority announced that it had carefully considered his sentence and decided to file an application for leave to appeal the six-year jail term, on grounds that the sentence was “too lenient” and would set a bad precedent. – Additional reporting by Leanne George and Hanlie Retief

What would you do in prison if you were Oscar Pistorius?

SMS us on 35697 using the keyword OSCAR. Please include your name and province. SMSes cost R1.50

We live in a world where facts and fiction get blurred
In times of uncertainty you need journalism you can trust. For 14 free days, you can have access to a world of in-depth analyses, investigative journalism, top opinions and a range of features. Journalism strengthens democracy. Invest in the future today. Thereafter you will be billed R75 per month. You can cancel anytime and if you cancel within 14 days you won't be billed.
Subscribe to News24
Related Links
Oscar Pistorius’ dad breaks silence
Justice, mercy in equal measure
Everything is broken, including the law
Next on City Press
Chris Hani Baragwanath Hospital has 861 urology patients on the waiting list

Listen to our latest podcasts.
Voting Booth
According to a letter Health Minister Joe Phaahla sent to MECs, the country is ready to get rid of masks in public as a health protocol. Is it time to go maskless?
Please select an option Oops! Something went wrong, please try again later.
About time
61% - 181 votes
No
39% - 115 votes
Previous Results