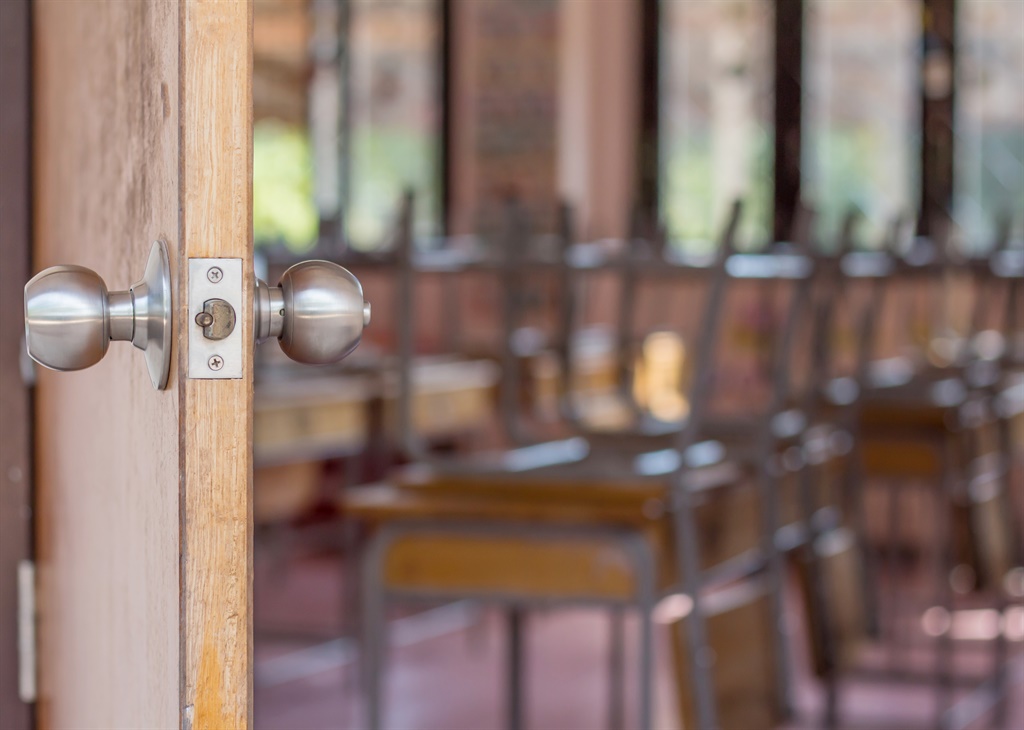 The National Alliance of Independent Schools Associations (Naisa) said that, while it supported the basic education department’s call for public and private schools to not open prematurely, it would appreciate some help when the time to reopen arrived. Picture: iStock/ Wirachai

Government’s plan to reopen schooling could be in jeopardy because of fears expressed by parents and teachers that schools across the country are not ready for the big step.

South Africa’s major teachers’ unions are threatening that their members will not turn up at schools tomorrow, violating the return date for teachers stipulated by the department of basic education. One union has even indicated that it will head to court to interdict the reopening.

Chief among the unions’ concerns are the slow delivery, or nondelivery, of essentials such as personal protective equipment (PPE), water tanks and additional classrooms.

The need for deep cleansing of schools and refurbishing of vandalised classes, as well as the lack of screening of teachers and learners with pre-existing conditions, are added concerns.

READ: Not reopening schools will cause more socioeconomic havoc

Teachers told Basic Education Minister Angie Motshekga that they would not resume their duties until all the essential supplies required to manage the Covid-19 coronavirus had been delivered.

They said the provinces were not ready to reopen schools and handle the influx of learners and teachers.

By yesterday, South Africa’s number of confirmed infections stood at 20 125, with 397 deaths.

Motshekga announced on Tuesday that all teachers must return to work on Monday, May 25, to prepare for the phased-in reopening of schools that would begin on June 1. Only grades 7 and 12 would restart lessons.

Motshekga and provincial MECs have been at pains to paint a picture that everything is going smoothly. But unions and parenting bodies are not buying the assurances.

Paul Colditz, chief executive officer (CEO) of the Federation of Governing Bodies of SA Schools, said a clear picture was emerging of provinces not being ready.

Sufficient PPEs have not been delivered and some schools still do not have adequate water supplies
Paul Colditz, CEO of the Federation of Governing Bodies of SA Schools

“Sufficient PPEs have not been delivered and some schools still do not have adequate water supplies,” he said.

Matakanye Matakanye, spokesperson for the National Association of School Governing Bodies (NASGB), said some schools were yet to receive PPEs and that there were no clear plans on how water would be delivered to them.

The NASGB disputed the rosy picture being painted by the national and provincial departments.

“The department said a week ago that they were not ready, but they are not saying now what is it exactly that was done and where, that now makes the system ready.

We know even now there are non-negotiables that are still outstanding – like the extra workforce, which comprise people who would supervise children outside classrooms and ensure that they wash their hands often, among others,” Matakanye said.

the system is not ready and that we are not taking any chances with our children’s lives
Matakanye Matakanye, spokesperson for the National Association of School Governing Bodies

He said the association was “not going to encourage parents to send their children back to school under current circumstances”.

“We are still saying that the system is not ready and that we are not taking any chances with our children’s lives. We are willing to support the department, but they have to be honest with us and say: ‘This is the plan’. They must say how it will be executed and how far it is [in the execution],” Matakanye said.

Anthea Cereseto, CEO of the Governing Body Foundation, said some education districts had supported schools by providing permits for principals and then authorisation for them to issue permits to staff.

“No one was supposed to be in a public school without a permit authorised by the head of the department of education (HoD). The HoD is responsible for the safety of the workplace, so permits can be issued when the PPEs are ready. If there are delays in issuing permits to principals and providing PPEs to them, the next step of getting school staff back cannot happen. It is a process.

“If anyone in the chain does not do his or her job, the dates on the schedule cannot apply. In many cases, the sticking place has been districts,” Cereseto said.

There were schools that had sometimes taken charge of the process of cleaning, obtaining PPEs and planning for the return of teachers, along with putting the necessary health and safety measures in place. Allen Thompson, president of the National Teachers’ Union (Natu), told City Press that “we are not going to work on Monday”.

“But if the employer is insisting,” he added, “we will need to obtain an interdict. Some schools still do not have water. This disease requires hygiene standards to be improved. It is too little, too late.”

He said the Covid-19 coronavirus had exposed the provinces’ faults in terms of not having “paid enough attention to the schooling system”.

A major issue of concern for teachers’ unions was that the that no assessment has been undertaken regarding which teachers should not report for work because of underlying illnesses, which could make them susceptible to infection.

A study conducted by the Human Sciences Research Council, which was commissioned by the basic education department in 2017, found that 58 000 of the country’s teachers were infected with HIV/Aids.

Basil Manuel, executive director of the National Professional Teachers’ Organisation of SA (Naptosa), told City Press that the basic education department was “stumbling in the dark” with regard to the assessment of teachers.

Manuel said unions were conducting their own survey on the matter and were expecting the results tomorrow.

Thompson said that Natu wanted an urgent sitting of the Education Labour Relations Council to negotiate the issue of teachers with comorbidities and those over the age of 60, and how they would be accommodated.

READ: ‘How do we stick to 70% rule?’: Scholar transporters demand state support

Chris Klopper, CEO of the Suid-Afrikaanse Onderwysers Unie, said the number of teachers with pre-existing illnesses has not been determined and that it was likely that many would be reporting for duty without such an assessment having been done.

Questions sent to the department on Wednesday had, despite numerous reminders, not been responded to by yesterday.

City Press understand that the department was scheduled to have a meeting with school governing bodies (SGBs) yesterday to update parents about its preparations. While provincial education departments were hard at work this week convincing citizens that they were ready for teachers, and subsequently learners, to return to schools, unions remained unconvinced.

Bronagh Hammond, the Western Cape education department’s spokesperson, said yesterday that a sizeable number of PPEs had been delivered on Friday afternoon.

Hammond said the province was awaiting directions from the department of basic education on the issue of comorbidities.

On Friday, North West education MEC Mmaphefo Matsemela said the provincial department was ready to reopen schools and assured the public that the hygiene “non-negotiables” would be completed on time. She said that about 1 400 people would be employed to conduct the screening of pupils and teachers three times daily.

But Sadtu’s North West provincial secretary, George Themba, said they had received a progress report from the province this week and it “does not reflect that the province is ready”.

“In one instance, we had a school with 37 employees which had received only eight masks ... Our members are ready to return to work but will not do so when the readiness of the system is still in doubt,” Themba said.

Limpopo education spokesperson Tidimalo Chuene said the department was now ready to cater for grades 7 and 12, as well as for teachers and other employees.

The KwaZulu-Natal department of education said funding shortfalls, supplier ineptitude and hard choices on how to implement social distancing had added pressure on officials, who had been expected to meet tight deadlines.

An additional headache for the province’s education MEC, Kwazi Mshengu, is the possibility of parents keeping their children at home, which will lead to capacity problems in 2021 should they have to repeat classes.

“We understand the anxiety of parents. That is why we are working hard to make our schools the safest environment for our children. If the majority of learners do not come back, the impact will be felt severely in years to come. For example, if we do not exit the 150 000 matriculants enrolled for this year, it means there will be no space for children who want to enter the schooling system next year,” Mshengu told City Press.

He said that virtual classes, likely to be undertaken by schools with the means to do so, would be “an added advantage”.

“Our strength is in the classroom; that is why we are preparing our schools to be safe places for teaching and learners. Also, the majority of schools in KwaZulu-Natal are in rural areas, where there are still connectivity challenges. Data costs do not make things easy for learners.”

But Sadtu provincial secretary Nomarashiya Caluza told City Press that the province was “nowhere near ready” for reopening.

In one instance, we had a school with 37 employees which had received only eight masks ... Our members are ready to return to work but will not do so when the readiness of the system is still in doubt
Sadtu’s North West provincial secretary, George Themba

“All of our leaders are still on the ground, and we are awaiting their reports [on readiness]. But the indication is that schools are not ready, and we will advise our teachers not to return. There is just no way,” she said.

Gauteng education spokesperson Steve Mabona had not responded to requests for an update yesterday.

Mpumalanga education department spokesperson Jasper Zwane said 90% of principals and school management teams had undergone screening and orientation. The cleaning and disinfecting of schools had started on Friday and would continue in some schools over the weekend.

“Delivery of PPEs to schools is expected to commence this weekend. Because not all schools have received the PPEs and not all have been disinfected, the department has directed teachers not to report for duty on Monday until they are advised accordingly by the department.”

But a principal at one of the schools in KaNyamazane, outside Mbombela, said: “The department just wants to appear to be working by saying we should go back to work.” – Additional reporting by Mukurukuru Media

Related Links
Not reopening schools will cause more socioeconomic havoc
Would the message have been different if Lesufi delivered the schools reopening plan?
Motshekga’s ‘optimism must be questioned’, say teacher unions
Share
Next on City Press
The curious case of SA’s donations worth millions to Cuba