The Orlando Stadium in Soweto was filled to capacity as family and mourners gathered for Winnie Madikizela-Mandela's funeral service. Picture: Lucky Nxumalo

At the official funeral service of the late struggle stalwart and icon Winnie Madikizela-Mandela, which was held at the Orlando Stadium in Soweto today, where around 40 000 mourners gathered, Economic Freedom Fighters leader Julius Malema took the opportunity to launch a scathing attack against those parties who played a role in not supporting Madikizela-Mandela while she was still alive.

As Malema, who was the only opposition leader to speak, took to the podium his position was clear: that some of those who were celebrating Mam’ Winnie at the funeral proceedings, were once the same people who spoke ill of the icon when she was still alive.

“In this fight, you were persecuted by the apartheid regime, and disowned by your own. Fellow South Africans, I am comforted by the fact that Mama died a perfect death. A death of a revolutionary because she never sold out,” Malema said.

Malema said that her book would be written in the “eternal book of life”, in reference to a symbolic book of political figures and activists who died “for the betterment of all”.

He called on the residents of Soweto to never forget Mama Winnie’s name, because “to remember her is to continue the fight against corruption and for economic freedom in our lifetime”. Speaking about one of the darkest clouds which hung over Madikizela-Mandela’s legacy, Malema said that the mother of the late Stompie Seipei, whose death Mam’ Winnie was accused of orchestrating, was at the stadium to pay her last respects.

Malema was overshadowed momentarily by a frenzy of booing, when he said that those who sold her out to the apartheid regime were present at the stadium.

“Some of those who sold you out to the regime are here...they are crying the loudest,” Malema said.

“Mama you said to us we must come back to the ANC, we heard you. But which ANC?” he said, saying that it’s the same ANC who sold her out.

Before Malema spoke, Madikizela-Mandela’s eldest daughter, Her Royal Highness Zenani Dlamini also spoke about the hardships which Mam’ Winnie endured, in the face of the media and the apartheid regime.

“As the world — and particularly the media, which is so directly complicit in the smear campaign against my mother — took notice of your acts of resistance, so too did this narrative begin to change. The world saw that a young generation, unafraid of the power of the establishment, was ready to challenge its lies, lies that had become part of my mother’s life,” Dlamini said.

Dlamini said that following the death of her mother, many have come out to absolve her mother’s reputation, and that she had asked herself: “‘Why had they sat on the truth and waited till my mother’s death to tell it?’ It is so disappointing to see how they withheld their words during my mother’s lifetime, knowing very well what they would have meant to her. Only they know why they chose to share the truth with the world after she departed.”

She called this “acts of cruelty”, and that her mother’s rightful legacy was lost during her lifetime. Also in attendance was international model Naomi Campbell, who has had close ties with the Mandela family ever since the late Nelson Mandela’s release in 1990 when she met him for the first time in New York that same year. She spoke of the impact that Mam’ Winnie had on her life, and referred to her as the “epitome of courage and strength”.

“On a personal level, I feel that Winnie represents something that we all have within us. She taught us not to be limited in our thoughts, reminding us to always stay true to who we are,” Campbell said.

“I was lucky to get to know her quite closely, and one of the things she always said to me and embedded in me, was that I must use my God-given ability and strength to make an impact in this world,” she said. President Cyril Ramaphosa spoke of Mam’ Winnie as an ‘enduring woman’, who despite everything that she faced, she carried on.

“After Nelson Mandela was jailed, she said: ‘They think, because they have put my husband on an island, that he will be forgotten. They are wrong. The harder they try to silence him, the louder I will become!’ And she became evermore so bold and loud,” Ramaphosa said.

Ramaphosa said that when Madikizela-Mandela was banished to the small town of Brandfort in the Free State, she “emerged from these torments emboldened, driven by a burning desire to give voice to the aspirations of her people”.

Ramaphosa called for the nation to commit themselves to the poor.

“Let us honour her memory by pledging here that we will dedicate all our resources, all our efforts, all our energy to the empowerment of the poor and vulnerable,” he said.

“She remains our conscience. May her soul rest in eternal peace. May her spirit live forever,” he said. President of South Africa and the ANC Cyril Ramaphosa speaks at the funeral service of Madikizela-Mandela.
Picture: Tebogo Letsie

As the funeral came to an end a large rain storm descended upon Soweto, as Madikizela-Mandela’s casket was transported to the Fourways Memorial Park, where a private ceremony was to be held. Winnie Madikizela-Mandela attending the ANCWL celebration in honor of her 80th birthday in Soweto.Picture: Felix Dlangamandla 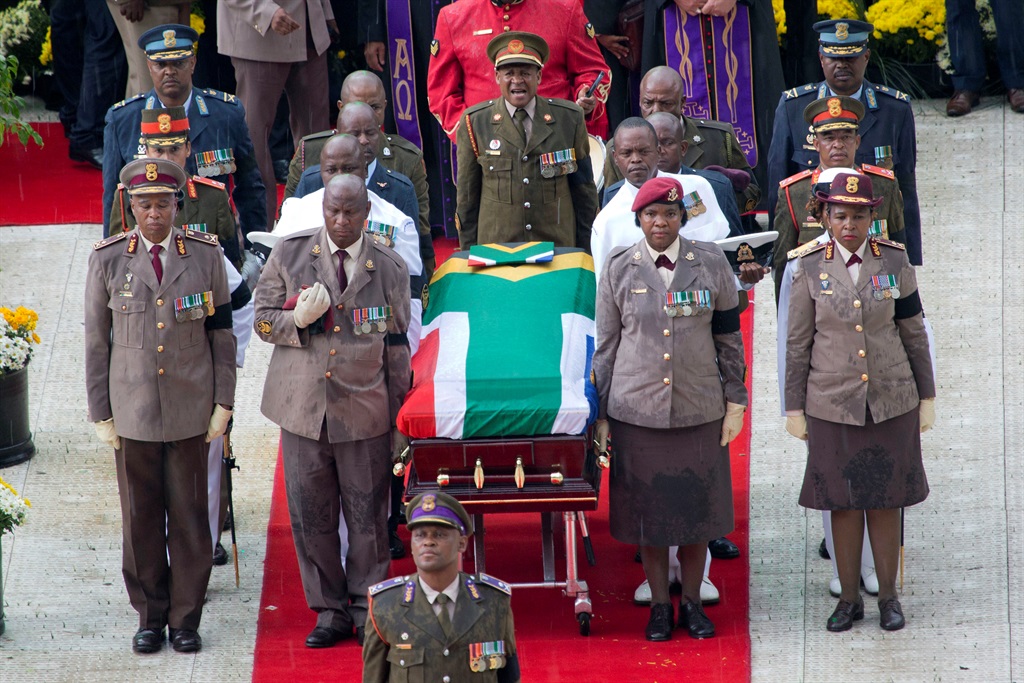 The casket carrying the remains of struggle icon Winnie Madikizela-Mandela arrives at the Orlando Stadium in Soweto,Picture: Themba Hadebe/AP Photo
We live in a world where facts and fiction get blurred
In times of uncertainty you need journalism you can trust. For only R75 per month, you have access to a world of in-depth analyses, investigative journalism, top opinions and a range of features. Journalism strengthens democracy. Invest in the future today.
Subscribe to News24
Next on City Press
Ocean lovers take Shell to court in a bid prevent it from seismic blasting on Wild Coast