'Four comrades have owned up, yes four' - Mantashe on #GuptaLeaks 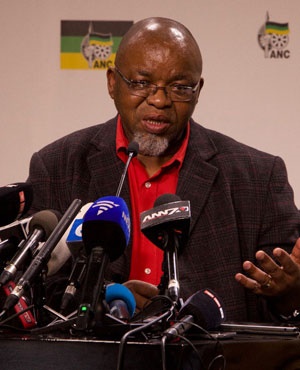 The fact that some ANC members have confirmed being implicated in a trove of leaked Gupta emails is good for the political party says its secretary general Gwede Mantashe.

He delivered an address on Friday night at the ANC Gauteng's policy conference taking place throughout the weekend in Irene.

"There is something positive coming out of these emails up, to now four of our comrades have owned up. Four, yes, owned up." He told delegates.

Mantashe who used the opportunity to deliver a political school style lecture spoke about the state of branches and members of the party. He also praised those who confirmed their involvement with the family said to have close ties to the president.

The Gupta's have been accused of having undue influence over President Jacob Zuma and some state owned enterprises. The family is also said to have had a hand in making key decisions such as appointing ministers in the country.

Their role in claims of state capture has been likened by some, such as the academic fraternity, as a soft coup.

'We used to lie blatantly'

Among those who have confirmed the claims are Communications Minister Ayanda Dlodlo who admitted that she had taken a trip to Dubai courtesy of the Gupta family, North West Premier Supra Mahumapelo who was cited as being one of the many faces in the liberation movement to have pitched at their Saxonwold home and the president's advisor Lakela Kaunda has confirmed that she was once on the Gupta payroll and discussed several business roles with the family.

#ANCGP SG says they may not produce lists but that won't stop them expressing their favourite in song @news24 pic.twitter.com/GYUK3oBryQ

"It didn't used to happen, we would deny everything [and say] no I don’t know what’s going on. We used to lie blatantly" said Mantashe in explaining how the posture of the party needed to change when it came to negative developments around the party.

He also reiterated the calls for a judicial inquiry, which the president has now said he would establish.

"It must be constitutional and enforceable," said Mantashe.

Mantashe said the 105 year old liberation movement needed to change its posture on matters in the public domain, not only speak out against wrong doings but show that it was actually taking measures to address the problems.

He praised one of his comrades, former mayor of Ekurhuleni and now Member of Parliament Mondli Gungubele for his role in an adhoc committee on communications and its handling of the troubles at the South African Broadcasting Corporation (SABC).

"When you started confronting the situation at the SABC then people began to see that the ANC knows the difference between right and wrong," said Mantashe.

The ANC SG also decried the state of branches saying there was a decline in political ideology in the movement.

"Comrades begin to howl and use common sense that is not so common because they are guided by no ideology," said Mantashe.

Giving insights on areas where current office bearers and stalwarts disagreed, Mantashe said former leaders of the party who had called for a national consultative conference had wanted to discuss the state of the organisation without the branches.

"We didn't agree with veterans when they said we don't want the branches [because] their politics [are] too poor," he said describing the request as flawed.

When you say that you are blaming the victim, he added.

"You recruit a person say for 23 years, then say a member who has been around for 15 years is of poor quality, that member of the branch is a victim of you not doing what you should do," he said.

Mantsashe said when he visited different branches across the different regions to deliver political school he found leaders, even in regions, did not know about the national democratic revolution.

"This is not isolated. It's not rare, you come across it everywhere," he said.

Mantashe said party members were not busy with discussions but too focused on issues around deployment and tenders.

He also said the party needed to accept that society was correct when it placed high expectations on the party.

"When people complain of state capture and that family [the Gupta's] we then say what about white monopoly capital," he went to define this as flawed.

"You are selecting the lowest common denominator to measure yourself because white monopoly capital is the essence of the revolution."