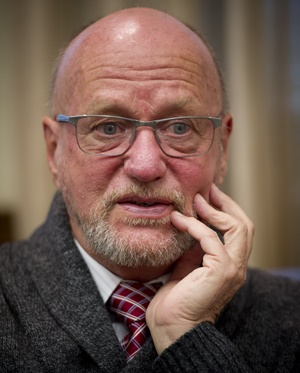 The furore around former tourism minister Derek Hanekom’s connivance with the EFF in a bid to topple former president Jacob Zuma has led to calls for him to step aside from leadership positions in the ANC, including the national executive committee.

Hanekom, who also heads the ANC’s national disciplinary committee, has received flack from the likes of ANC secretary-general Ace Magashule as well as Zuma, after he confirmed that he had secret meetings with the EFF leaders to discuss ways to remove Zuma from power.

While Magashule dubbed Hanekom a “wedge driver” and a “charlatan”, Zuma took it a step further, stating on Twitter that his former Cabinet minister was “a known enemy agent”.

The ANC national executive committee has its regular meeting this weekend starting on Friday, and the state of the organisation and other current affairs issues will come under discussion.

On Wednesday the ANC youth league in Free State also entered the fray, labelling Hanekom an “askari” and a “counter revolutionary”, suggesting that he had sold out. The league called for the national executive committee to “suspend this political jigsaw and restore the discipline and decorum of our movement”.

“We wish to state it categorically that we no longer regard this political askari as a leader of our movement and we shall henceforth attend to him as we do to all our fiercest political enemies,” said the league’s provincial secretary Reagan Booysen.

Booysen said Hanekom had, typically, always been antagonistic “towards any progressive programme that is meant to touch the white privilege and tilt the economic ownership patterns in this country, such as the land expropriation without compensation policy.

EFF leader Julius Malema dropped the bombshell on Tuesday outside the North Gauteng High Court. He said he was dismayed that Hanekom, an ally of President Cyril Ramaphosa, used to be in bed with his party when they were plotting against Zuma but recently called the EFF a party of fascists because they had dared to challenge Public Enterprise Minister Pravin Gordhan.

Malema claimed Hanekom handed over a list of ANC MPs who would vote against Zuma. He also told his supporters that Hanekom was prepared to form a splinter party if President Cyril Ramaphosa did not defeat Nkosazana Dlamini-Zuma at the party’s 2017 national elective conference.

On Wednesday, Hanekom admitted meeting EFF secretary-general Gordrich Gardee. However, when he responded to a query from News24, he initially denied that there was anything sinister about it.

Read: Zuma 'not surprised'about plan to oust him by 'known enemy agent' Hanekom

“I have said – not admitted – that at the time I met Gardee. His initiative, not mine. There is nothing [wrong] with meeting a fellow [member of Parliament], which is what we were at the time.”

Later, after a Kader Asmal lecture in Sandton, Johannesburg on the same night, Hanekom said his meeting with the EFF was of a common interest because it was during a “difficult time in South Africa’s history”.

He also said “there is no way” he could have refused to have a meeting of that nature with fellow parliamentarians.

Magashule, a chief ally of Zuma, said in a stinging statement following Hanekom’s confession that the ANC allowed room for dissent and it was therefore shocking that a high ranking member of the party would connive with the opposition to remove the ANC from power.

He said that during the EFF’s motion of no confidence against Zuma in February last year the ANC had called for an open vote and “it is Hanekom and others who put pressure on the speaker to accede to the demand by the EFF for a secret ballot”.

“The agenda of the EFF by their own admission as an opposition party is to displace the ANC. They work fearlessly to divide the ANC and have a number of sleepers in the ANC proactively ensuring that divisions in the ANC are deepened,” he said.

He said Hanekom had conducted himself like “a wedge driver and was on a mission to divide the ANC”.

He added that “indeed this charlatan is making his mark through his ownership of the Ahmed Kathrada Foundation”. Hanekom sits on the board of the foundation.

Magashule said that although Hanekom did not have the capacity to form a new political party, he had shown remarkable agility in his efforts to divide the ANC.

“Well, we say to him and other EFF sleepers in the ANC, this only makes the members of the [ANC] and branches more determined to unite the ANC and deliver services to the people of South Africa.”

He said the party would “ride this storm of accusations, and counter accusations [and] we will unite behind the leadership of President Ramaphosa and all ANC members of good faith and defeat the nefarious negative actions of Hanekom”.

Related Links
MPs’ exodus continues as Hanekom also calls it quits
As Zuma blows R25m on a private jet, Hanekom gets to ride the karma bus
Horror as Zuma fires Gordhan in late-night reshuffle that ‘wasn’t discussed’
Share
Next on City Press
What’s in City Press: Ace’s pals score big; How Mabuza fought back; Brand SA is rotten to the core