Prisoners go from crime to crocheting blankets for Madiba Carolyn Steyn, the founder of 67 Blankets for Nelson Mandela Day, works on a blanket in her home in Steyn City. Started four years ago, the initiative now sees prisoners around the country joining crochetiers to make a difference. Picture: Tebogo Letsie

There are far more crochetiers in this country’s prisons than there ever were. A video, shot in Pretoria’s Zonderwater Prison, shows a man in orange overalls sitting on the bottom of a prison bunk, crocheting a lush, midnight-blue blanket that sparkles with silver thread, with a thick size 15 needle.

The stitches are perfectly even. He’s so deft and skilled he can crochet without looking down at his hands. At that moment, he’s more platteland ouma than convicted armed robber.

After a brief discussion with a cellmate about which stitch to use, naming the options and addressing their suitability, the prisoner tells the camera he cannot wait to be locked up each night to get to the work which has given him a sense of purpose. He is crocheting because of Carolyn Steyn, the big boss of 67 Blankets for Nelson Mandela Day, who interviews him in his overcrowded cell and records him on her iPad.

She is not in the least concerned about dishing out crochet hooks to criminals. “I believe any man who puts a hook to wool wants to rehabilitate himself, do something useful, make a difference.”

Unlike the prisoner, you won’t find Steyn, an actress and almost-Hollywood film star before her mother’s illness brought her back from Los Angeles, discussing fancy crochet patterns and stitches. She sticks to the basics: chain and treble stitch. 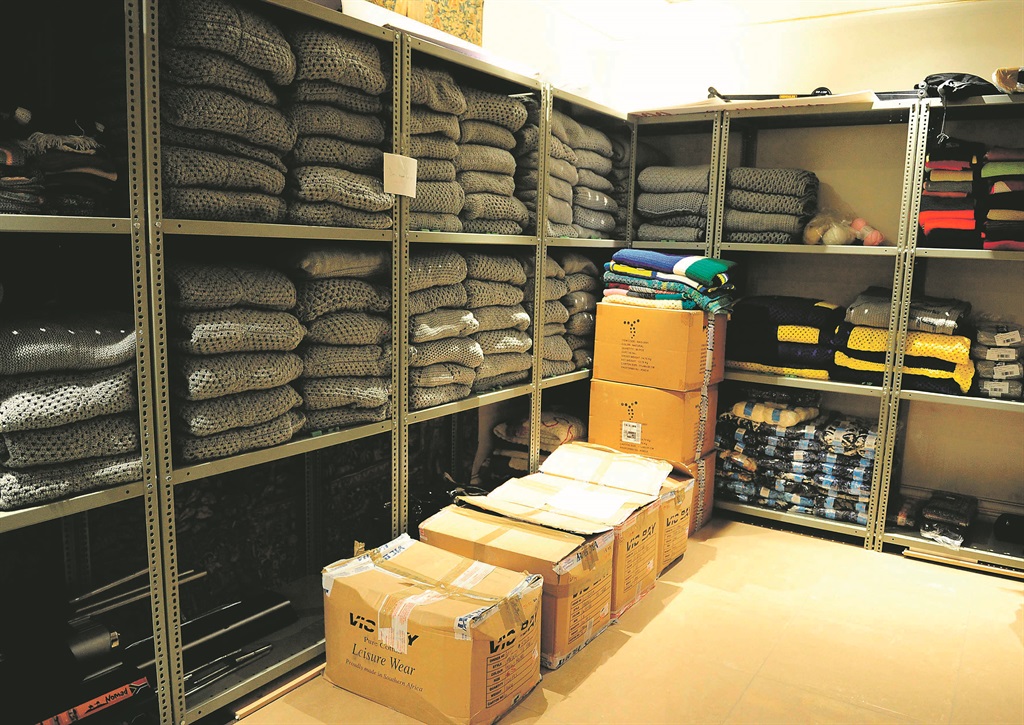 We speak in the “green lounge” of the 3 000 square metre mansion, Palazzo Steyn, where she lives, with its magnificent Stephen Falcke-designed interiors: gilded ceiling cornices and elaborate tapestries with a view over the property’s not one, but two, waterfalls. The home, reported to be worth R250 million, is the centrepiece of the Steyn City mega estate developed by her billionaire insurance entrepreneur husband, Douw.

After passing three security checkpoints, we are directed to the garage, which is more ballroom than parking lot. The marble floor tiles inlaid with circular Italianate patterns are polished to a high gloss, and gleam almost as much as the 20 or so vintage, classic and luxury cars that line one side of the basement.

Piled high against the opposite wall, however, are scrappy-looking brown cardboard boxes crammed with wool.

Steyn’s office, the pivot point of 67 Blankets for Nelson Mandela Day, is there too. A smaller room containing four simple desks with low dividers is where Steyn sits opposite her sister, Sharon, whom she employs to help with logistics, run her diary, and keep her sane. Another is occupied by Jaco, her personal assistant. The room, like the larger adjacent storeroom, is lined with industrial shelving, piled with blankets on which small pieces of Sunlight soap have been placed to keep away the moths. Because mothballs smell.

I marvel at the scale of the operation.

“Oh, this is nothing. When we get them all in soon, half the garage will be taken up by blankets,” she says.

And where will the cars go?

“The cars will have to go outside.”

It was at this house where 67 Blankets for Nelson Mandela Day was conceived four years ago, with a joke.

“Shortly after the passing of Madiba, we were all very bruised,” she says, explaining that Madiba and her husband had a “very close father-son relationship”. Mandela lived with Douw Steyn for a year in his Sandhurst home, which he later transformed into the Saxon Hotel.

“It was my husband’s birthday and it was a very small group of people around a lunch table. Zelda [la Grange, Mandela’s personal assistant] was there and I was boasting about my domestic abilities, of which I have none,” Steyn says.

“She said, in her way: ‘Why don’t you make 67 blankets for Nelson Mandela Day?’ I said, ‘Sure, no problem’. But it was lighthearted banter. And I forgot.”

On Christmas Day, Steyn’s sister arrived “with a bag of wool and reminded me of my pledge”.

Her problem was how to produce, by hand, 67 blankets.

“I asked both sisters if they would make a blanket, but I needed 67, and I didn’t have 67 friends,” she says.

At 3am one morning, she asked her Facebook friends for help. When she woke up, “there were hundreds of people who wrote #I’mIn”.

“I said to my husband one day: ‘Should we go and watch television?’ He said: ‘No. I want to look at these blankets. I am trying to figure out why people would drive to a shop, spend their money buying wool, and then go home and spend many hours making blankets. Then the biggest question of all is, why do they give the blankets to you?’ We’re still trying to figure it out.”

Today, 67 Blankets for Nelson Mandela Day has racked up three Guinness World Records, and covered the lawns in front of Pretoria’s Union Buildings and the grounds of Paarl’s Drakenstein Prison.

On Tuesday, at the Zonderwater Prison outside Cullinan, they will be going for another record, a giant blanket of more than 8 000 square metres, consisting of individual black, white and grey blankets that form the pixels making up what they’ve called the Massive Mandela Masterpiece. Because of it, the country ran out of grey wool last year – twice. The nation was also all out of crochet hooks.

Steyn and her people sew a satin label on to every blanket they receive, which says “67 Blankets for Nelson Mandela Day” so their recipients “will look at it and know Madiba is still looking after them”.

They have collected 40 000 blankets since the project began, including from prisoners through a partnership with the Department of Correctional Services.

Steyn and her 50 ambassadors distribute the blankets and take photographs which they post on the organisation’s Facebook page, where those who made them can see them wrapped around the shoulders of a child or an elderly person.

Steyn is now busy with yet another record, a drive to crochet scarves which, when stitched together, will stretch for 27km.

Steyn is now more chief executive than retired actress, and the charity has chapters across the world, from the United States to India.

The difference, though, is that she is the one doing all the paying. They do no fundraising. “I’m not good at it,” she says.

So how much does it cost?

“Rather a lot. It costs rather a lot,” is all she’ll say.

She has had some help: a R9 million wool donation from a single company, and Stuttafords Van Lines transports blankets across the country without charging a cent for time or petrol.

Being the boss of 67 Blankets for Nelson Mandela Day is a full time job.

“My life changed from going to the ballet, going to the theatre, I was a judge for the Naledi Awards, it was kind of easy and relaxed. I was going to go back to my pool and studies, and then blankets kept piling up,” she says.

“It has given me a real sense of purpose.”

Carolyn and Douw Steyn married and divorced in 2003, and married again in 2013.

“I was always Douw’s girlfriend and Douw’s wife, or Douw’s ex-wife. I had lost my identity. I wasn’t acting anymore. And I had lost my confidence,” she says.

“I have now found myself.”

Listen to our latest podcasts.
Voting Booth
According to a letter Health Minister Joe Phaahla sent to MECs, the country is ready to get rid of masks in public as a health protocol. Is it time to go maskless?
Please select an option Oops! Something went wrong, please try again later.
About time
62% - 184 votes
No
38% - 115 votes
Previous Results