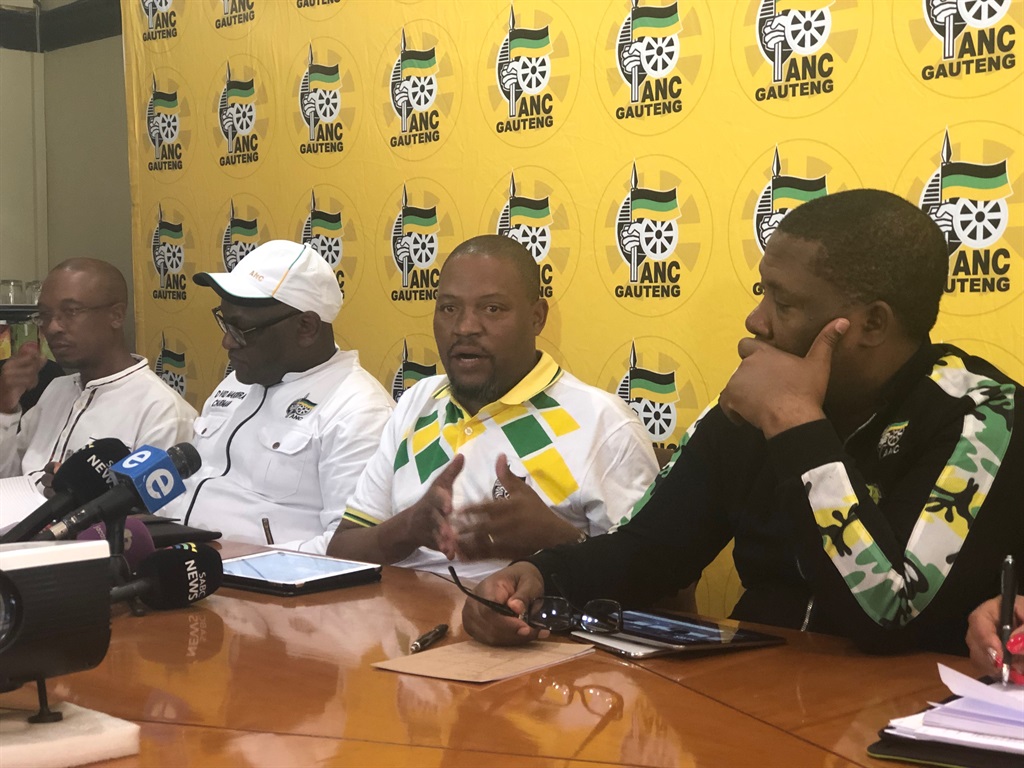 The Gauteng ANC Provincial Executive Committee briefing the media on the PEC’s resolutions on a number of political developments that have been plaguing the province on (Thursday 13 2018) Picture: Juniour Khumalo/City Press

Gauteng premier and chairperson David Makhura has commended the ANC in Gauteng for demonstrating “political maturity” in the manner in which the party has confronted and handled disputes within the first quarter of the Provincial Executive Committee’s (PEC) election in July.

Makhura was on Thursday addressing the media on the PEC’s resolutions on a number of political developments that have been plaguing the province.

The announcement also followed the Gauteng branch’s conference held on Wednesday at which the province nominated candidates for the provincial and national legislatures ahead of next year’s general elections.

Makhura said the manner in which the list process – the official gathering and nomination of individuals that will represent the province in the provincial and national legislature – was a “resounding success” and the entire process was realised in a manner which portrayed the province in a dignified light.

“The process demonstrated that there is peace in Gauteng and throughout the entire process we stressed the need to consolidate unity.

“Citizens do not appreciate divisions within the party as divisions result in divided focus. Instead of exhausting our attention on the citizenry, we would be wasting our efforts on settling scores,” said Makhura.

The premier also emphasised that “there was a unanimous endorsement of the individuals who made the list”, and described this as a demonstration of a great “degree of political maturity which was palpable during [the] conference”.

The party’s provincial secretary general Jacob Khawe concurred, saying “there were only 14 disputes from the over 300 branches that took part in the list nomination process”.

The PEC was in agreement that the reason why the provincial list conference was “such a success” was because “braches were afforded the proper opportunity to express their views” on who was to represent the province.

“To appear on the list individuals had to be nominated by not less than 10 braches,” added Makhura.

“If you want to get it right, the branch process must be clean and transparent”.

Only the best candidates nominated

Deputy chairperson Panyaza Lesufi also added that “the best candidates” to represent the province were in essence nominated and made it to the list.

When quizzed by the media on how the names of disgraced members – former health MEC Qedani Mahlangu and former ANC chief whip in the Gauteng legislature Brian Hlongwa – found their way on to the list, the PEC members clarified that this was not the case as the two were not on the list.

Lesufi, however, assured the media that should there be any individuals in the list who are facing any allegations, the party would afford them the proper opportunity to clear their name and not just act based on allegations.

“Hlongwa for example has not been charged and no case has been opened against him,” said Lesufi.

“It would therefore be unwise for the province to go ahead of its own processes in place for resolving such matters”.

Lesufi also added that the names currently appearing on the list may not all be there when the final list is constituted by the national list committee.

“The national list committee and the national ANC NEC still holds the discretion to test the character and integrity of the individuals nominated and can at a later stage change or retain the list,” said Lesufi.

He, however, added that as a province they were happy with the names included and were sure that those were the “best among the members in the province to be elected”.

Gauteng municipalities that invested millions in VBS to be investigated

Khawe also added that the Gauteng PEC had resolved to recommend the mayors of the West Rand District Municipality and Merafong Local Municipality who invested money into VBS Bank to the integrity committee.

He said the PEC had instructed the committee to deal with the matter expeditiously as this was in the best interests of the PEC and the mayors, Boyce Maneli and Maphefo Mogale-Letsie, given that their names were included in the list.

Another resolution announced during the media briefing was that Khawe had resigned as the mayor of Emfuleni Municipality.

Khawe’s decision comes after he was accused by the ANC regional structure in Sedibeng of refusing to step down after being elected as Gauteng ANC provincial secretary, which is a full-time position, in July.

He had been fighting with the embattled ANC Sedibeng regional executive committee but managed to hang on to his mayoral position saying there were “various issues he needed to sort out” before departing.

The PEC announced that it would meet and decide on who will stand as a mayoral candidate.

The Emfuleni council is expected to convene on Friday and elect a new mayor for the troubled municipality, which was placed under the administration of provincial government after concerns over financial mismanagement and poor service delivery.

Despite the challenges facing the province, the PEC members were in agreement that “the ANC in the province was demonstrating unity” and was “ready to mount a strong challenge to regain governance of the province come 2019”.