Gauteng now burns for Zuma too 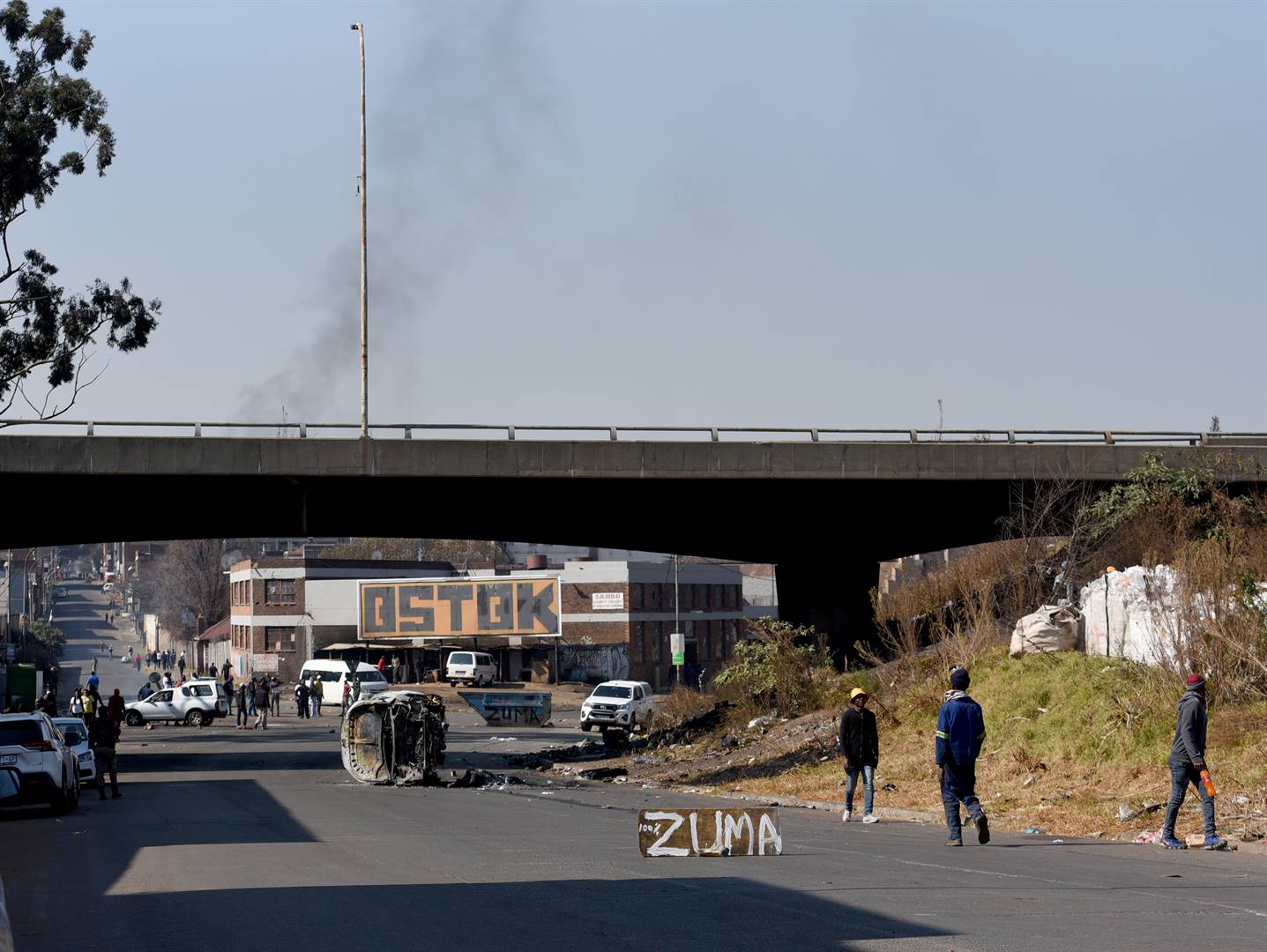 The smouldering remains of property that was destroyed during pro-Zuma protests in Johannesburg on Sunday. Photo: Tebogo Letsie/City Press

Violence and looting sprees erupted in parts of central Johannesburg on Sunday after pro-Jacob Zuma protests, which initially flared up in KwaZulu-Natal, spread to Gauteng.

The protests turned into looting sprees, leaving a trail of destruction as protestors moving through the streets of the Johannesburg CBD looted stores and destroyed property. The protests were sparked by the imprisonment of former president Jacob Zuma after the Constitutional Court sentenced him to a 15-month jail term last week for contempt of its order to appear before the Judicial Commission of Inquiry into Allegations of State Capture.

Work was under way for the better part of Saturday to clear the N3 at Mooi River of the burnt trucks, tyres and other debris used to barricade the road. The N3, N2 and N7 highways from the Port of Durban were the most affected.

The pro-Zuma protests spread to Gauteng after posters were circulated on social media inviting Zuma’s supporters to a gathering at Kwa Mai Mai in downtown Johannesburg on Sunday.

There is heightened police visibility in Gauteng and KwaZulu-Natal with the South African Police Service and Metro Police officers working together to respond to incidents of violence and looting.

As of Sunday morning, at least 62 people had been arrested for public violence, theft, possession of suspected stolen property and malicious damage to property across the two provinces. 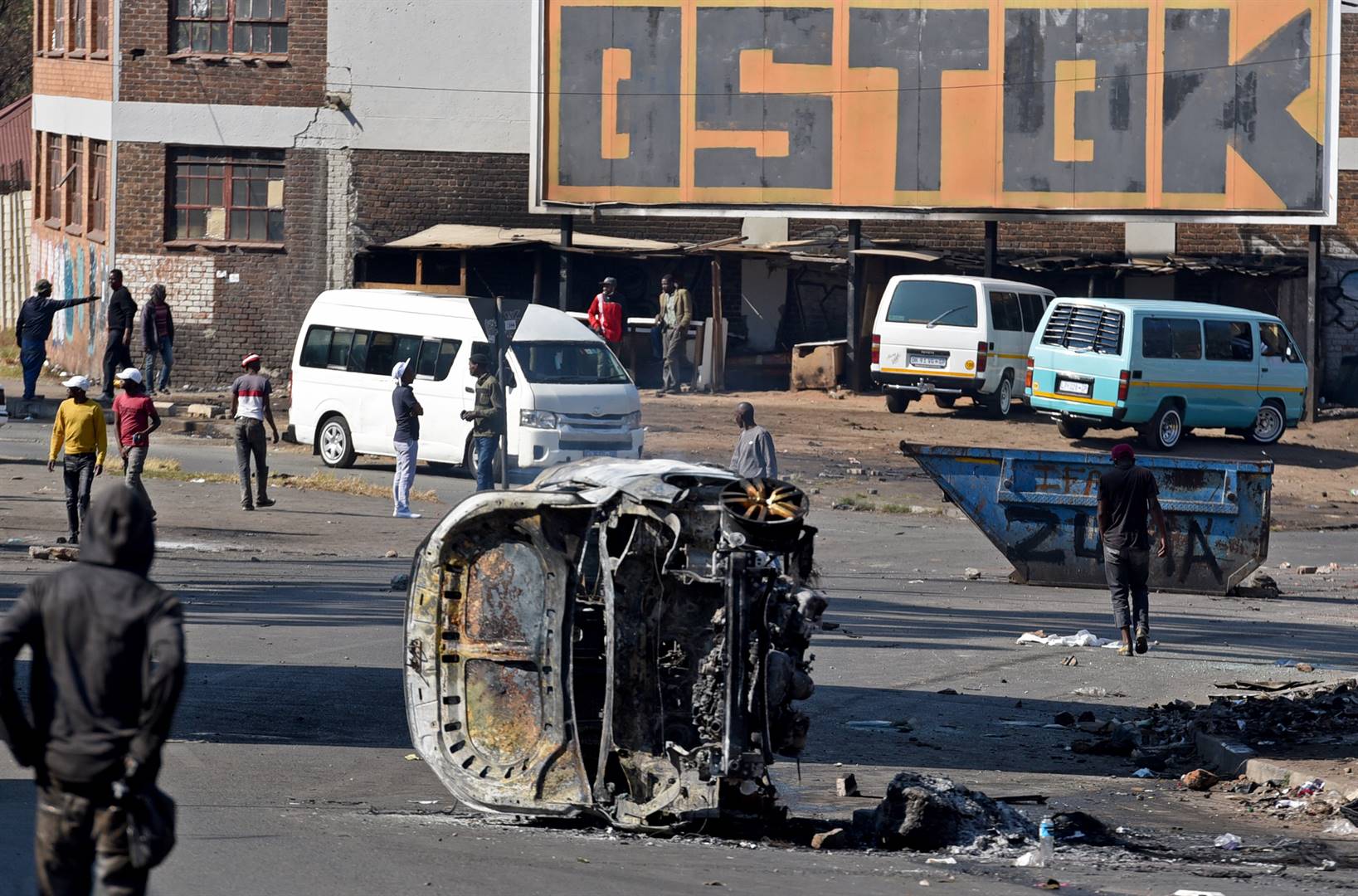 Stores were looted and property destroyed during protests which erupted in the Johannesburg CBD on Sunday, Photo: Tebogo Letsie

In a statement issued late on Sunday morning, police confirmed that at least 25 suspects had been arrested following “sporadic incidents of looting of businesses and barricading of roads in Jeppe and Alexandra” on Saturday night.

This group of about 800 people is reported to have attacked police resulting in the shooting of police officers.
SA Police Service

A police officer was also shot and wounded in Alexandra.

“In Alexandra, police arrested 18 suspects – 16 of them for public violence also linked to the shooting of a police officer who was rushed to hospital for urgent medical attention. Two other police officers sustained minor injuries,” the National Joint Operational and Intelligence Structure (NatJOINTS) said in the statement.

The other two suspects were arrested for possession of suspected stolen property and malicious damage to property.

“This group of about 800 people is reported to have attacked police resulting in the shooting of police officers who have now received medical attention, with only one in hospital in a stable condition,” the NatJOINTS explained.

In the Jeppe policing precinct, police dispersed a group of about 300 people who had barricaded the M2 freeway.

“It is alleged that one group then headed to the Jeppestown where they looted a number of businesses. Seven suspects were arrested, four of whom were found inside one of the stores, while three were arrested for public violence and for being in possession of suspected stolen property,” the NatJOINTS added.

Meanwhile, no arrests have been made in connection with the orchestration of the violence.

The police ministry has sounded a warning, saying “charges being instituted against such persons cannot be ruled out, especially if such actions lead to injury or death”.

We live in a world where facts and fiction get blurred
In times of uncertainty you need journalism you can trust. For only R75 per month, you have access to a world of in-depth analyses, investigative journalism, top opinions and a range of features. Journalism strengthens democracy. Invest in the future today.
Subscribe to News24
Next on City Press
Inside SA’s kidnap crisis

Listen to our latest podcasts.
Voting Booth
Were the knee-jerk travel bans imposed on SA following our detection of the Omicron variant necessary?
Please select an option Oops! Something went wrong, please try again later.
We are being punished
47% - 52 votes
Rather safe than sorry
29% - 32 votes
They have every right
24% - 26 votes
Previous Results
The best of 2020
Can you guess who featured in our most popular articles from 2020?