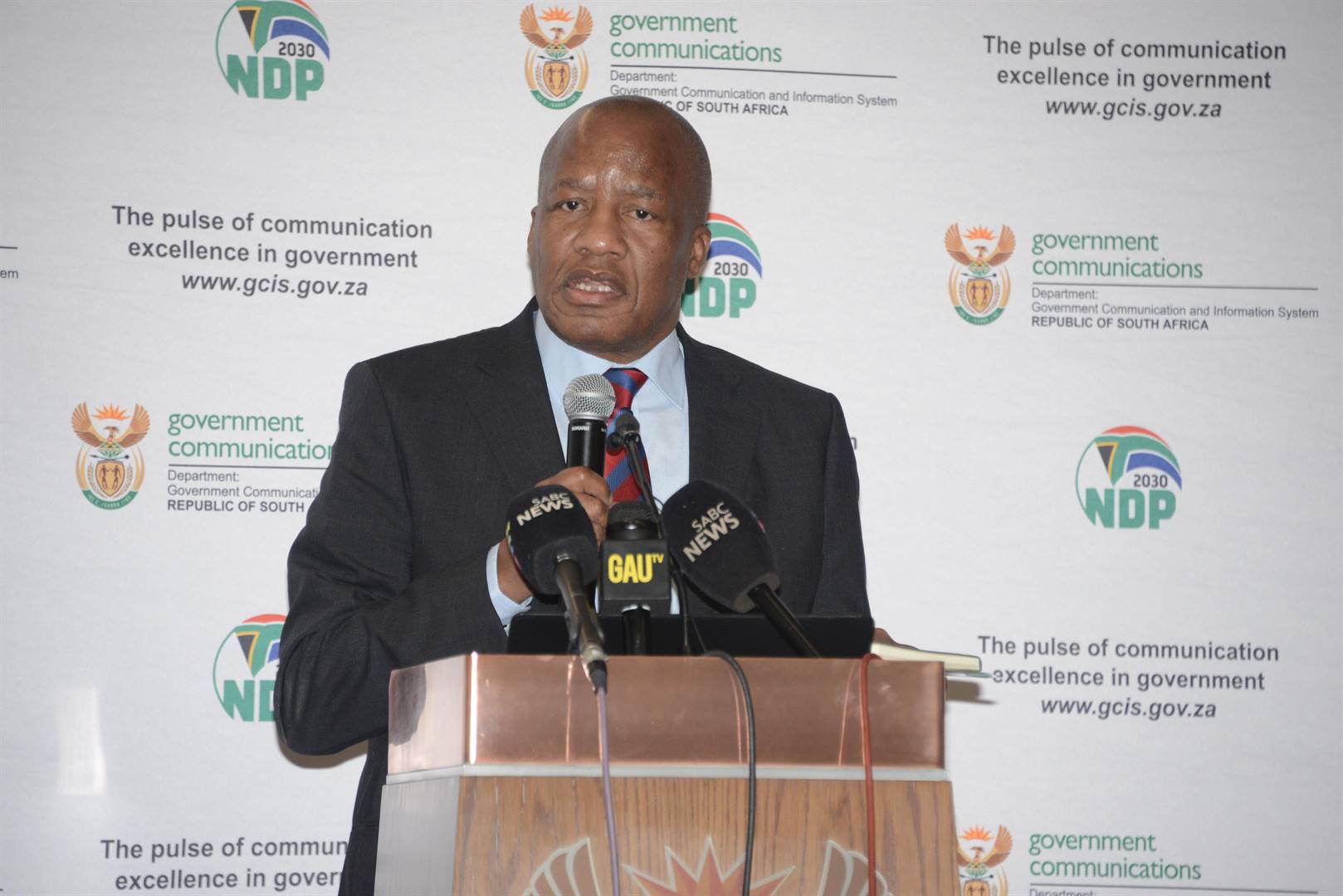 Comrades pay tribute to the head of the presidency, praising him for his honesty, hard work and loyalty.

Jackson Mthembu has been described as a role model and self-motivated minister who mingled easily with the people without the pretensions of his office.

Mthembu, who was the minister in the presidency, died on Thursday from Covid-19 complications after being hospitalised more than a week ago.

Since March, Mthembu had worked tirelessly on spreading the message about the danger of the pandemic as he marshalled government’s communication machinery when the first case of Covid-19 was reported.

While several Cabinet members, including Gwede Mantashe and Thulas Nxesi, have been hospitalised with Covid-19, Mthembu was the first minister to succumb to the virus.

This week, his colleagues said he was a humble leader who disliked having bodyguards around.

Lassy Chiwayo, who met Mthembu as a 13-year-old activist in Emalahleni, Mpumalanga, said: “When I became MEC [for finance], he told me to forget about bodyguards and never to fear the people. I also drove myself around during that time because of his advice that leaders should be what fish is to water when it came to the people.”

Chiwayo said being in the presidency did nothing to change or make Mthembu feel like a VIP: “His staff came to me, begging me to get through to him because he would not listen to them [about having bodyguards]. They were worried as Bab’u Mthembu would leave his protectors behind to go alone to townships, where he visited his childhood friends.”

Then I was told to stop everything and call him, so I was starting to get worried because I could feel that there was something wrong. I called him and he gave me the bad news. I was shocked and devastated
Paul Mashatile

ANC treasurer-general Paul Mashatile’s friendship with Mthembu spanned more than 20 years. He described him as a “trustworthy partner and diligent activist”.

“Then I was told to stop everything and call him, so I was starting to get worried because I could feel that there was something wrong. I called him and he gave me the bad news. I was shocked and devastated,” he said.

They grew close when they worked for the United Democratic Front (UDF) in the 1980s. He realised then that Mthembu was “reliable, very honest and straightforward”.

“We worked together in the UDF; obviously all of us coming from student and youth politics. Me and him were elected to lead the Southern Transvaal, I was the general-secretary and he was the assistant secretary.”

They even lived together, and their friendship developed into a brotherhood. “I remember, because he came from Mpumalanga, he would go home on weekends. I convinced him to come and stay with me in Alexandra and he did.”

Mashatile said Mthembu should be remembered for his passion for helping people and his disdain for corruption.

“He was practical and had no time for theories. In my cabinet, he was anti-corruption and ran a clean ship. When others were stealing money, he would say: ‘Is’phukuphuku lesi [this is an idiot].’ I either called him by his clan name Mvelase or S’phukuphuku because of what he called corrupt people,” Phosa said.

“There might have been bad social stories about him, but when it came to government and the ANC, you can search and you would find nothing. He drew a solid line between that. He would never use his position and his proximity to the president to benefit himself or his family,” he said.

He was loyal, but when a leader did something he did not like, he made a 360° turn against that leader. I remember when Ndaweni Mahlangu was Mpumalanga premier [1999 to 2004]. I had to come between them because Mthembu was tired [of his shenanigans] and was charging at him.

The only scandal Mthembu was linked to was that he authorised the purchase of Mercedes-Benz vehicles for the MECs against national government’s directive. The MECs ended up paying for the cars. When Mthembu was convicted for drunken driving in Cape Town in 2010, he publicly apologised and later quit drinking.

He was not shy to speak out about his son’s addiction to nyaope in 2017. Two years later, when his daughter committed suicide in Cape Town, he also spoke openly about that and how it had affected the family. Chiwayo said Mthembu spoke out when he was uncomfortable with ANC leaders, as he did about former presidents Thabo Mbeki and Jacob Zuma.

“He was loyal, but when a leader did something he did not like, he made a 360° turn against that leader. I remember when Ndaweni Mahlangu was Mpumalanga premier [1999 to 2004]. I had to come between them because Mthembu was tired [of his shenanigans] and was charging at him. He was the loudest voice on leadership issues,” Chiwayo said.

Phosa said he texted Mthembu when he heard he had been hospitalised: “Morning cde Jackson. Sorry to hear u not well. You are a servant of the people. You must recover and return to the trenches. I know it’s very difficult and we pray for you.”

Mthembu did not text back, but phoned instead.

Read: ‘We are a caring government’

“He called me from his ventilator, can you believe it? He said: ‘Matewu [as he called Phosa], kunjani?’ That was his goodbye to me,” Phosa said.

Small Business Development Minister Khumbudzo Ntshavheni was in constant contact with Mthembu in the weeks before his death. From his hospital bed, Mthembu made time to speak to his colleagues to make sure that everything was running smoothly, said Ntshavheni.

In a tribute on Facebook, Ntshavheni wrote: “When this deadly virus finally attacked you, you still commanded us from your hospital bed on how the communications must go.

“Just last week, when lies were being peddled about our support to small businesses, you called me from your hospital bed and instructed that I avail myself for the media briefing you will organise on progress with economic recovery efforts.

“Your booming voice was its normal instructive self and you promised you were recovering. You did not forget to thank me for plotting with [Justice Minister Ronald] Lamola that nothing on your plate falls by the wayside when you are in hospital and commended us for being our brother’s keeper.”

Obviously, I took it very hard. It’s not easy to believe because when we got to know that he was Covid-19-positive, we were sending him messages. We had been hopeful that he would recover
Sbongile Besani

She added that Mthembu always “chastised me firmly” when she was wrong, and never allowed her to sulk.

ANC head of the presidency Sibongile Besani said he was still in disbelief about Mthembu’s passing.

“Obviously, I took it very hard. It’s not easy to believe because when we got to know that he was Covid-19-positive, we were sending him messages. We had been hopeful that he would recover,” he said.

Besani said from time to time they had differences of opinion with Mthembu, but they always ironed out the issues in an appropriate manner.

“When I became head of the presidency, I remember one of the moments that we differed over something and how he handled that without drama.

“I could always bounce ideas off him. We had our conversations and he was more like a brother to me,” Besani said.

We live in a world where facts and fiction get blurred
In times of uncertainty you need journalism you can trust. For only R75 per month, you have access to a world of in-depth analyses, investigative journalism, top opinions and a range of features. Journalism strengthens democracy. Invest in the future today.
Subscribe to News24
Related Links
Gloves come off in Brand SA ‘battle’
Cabinet vows to act on Covid-19 corruption
‘Ramaphosa is a great visionary’ – Mthembu
Next on City Press
People infected by 501Y.V2 may have some immunity against the new variant

Read more on:
deathanc
Podcasts
Podcast | How to select the right exchange traded funds in this crazy market