Patients in need of critical medication and treatment have been denied access to the Thelle Mogoerane Hospital in Vosloorus.

Disgruntled staff blocked the entrance to the regional hospital on Wednesday, leaving desperate patients not only angry but also without access to the healthcare they required.

Thuto Pelea, a 26-year-old mother of a four-month-old baby who was born prematurely, arrived at the hospital for her baby’s check-up at 7am and was greeted with chaos.

“It is now 12pm and I am still hopeful that we will be granted access because I left home at 6am to make sure I get here early, only to be met with a hospital that has been shut down. I cannot just give up,” the concerned mother said.

Trade union Nehawu’s branch secretary at the hospital Patrick Ntonga told City Press that staff shortages, inconsistent budget allocations as well as the failure to permanently employ contract workers who were brought on board to help deal with Covid-19 were among their list of grievances. They were urging the hospital management and the Gauteng department of health to intervene.

“We will not let anyone in or out of the hospital until our demands are met,” Ntonga told City Press.

“Should anything happen to patients currently in that hospital, the management will be held accountable as they seem to ignore us.”

Ntonga, who is an assistant pharmacist at the regional hospital, revealed to City Press that the gates to the hospital have been shut since 6.30am.

In a memorandum addressed to Gauteng Health MEC Nomathemba Mokgethi, which City Press has seen, healthcare workers are demanding that additional staff are recruited to cover departments that are already overworked.

“The employer extended some departments without beefing up staff. Workers are exploited by performing extra duties than what is expected.” 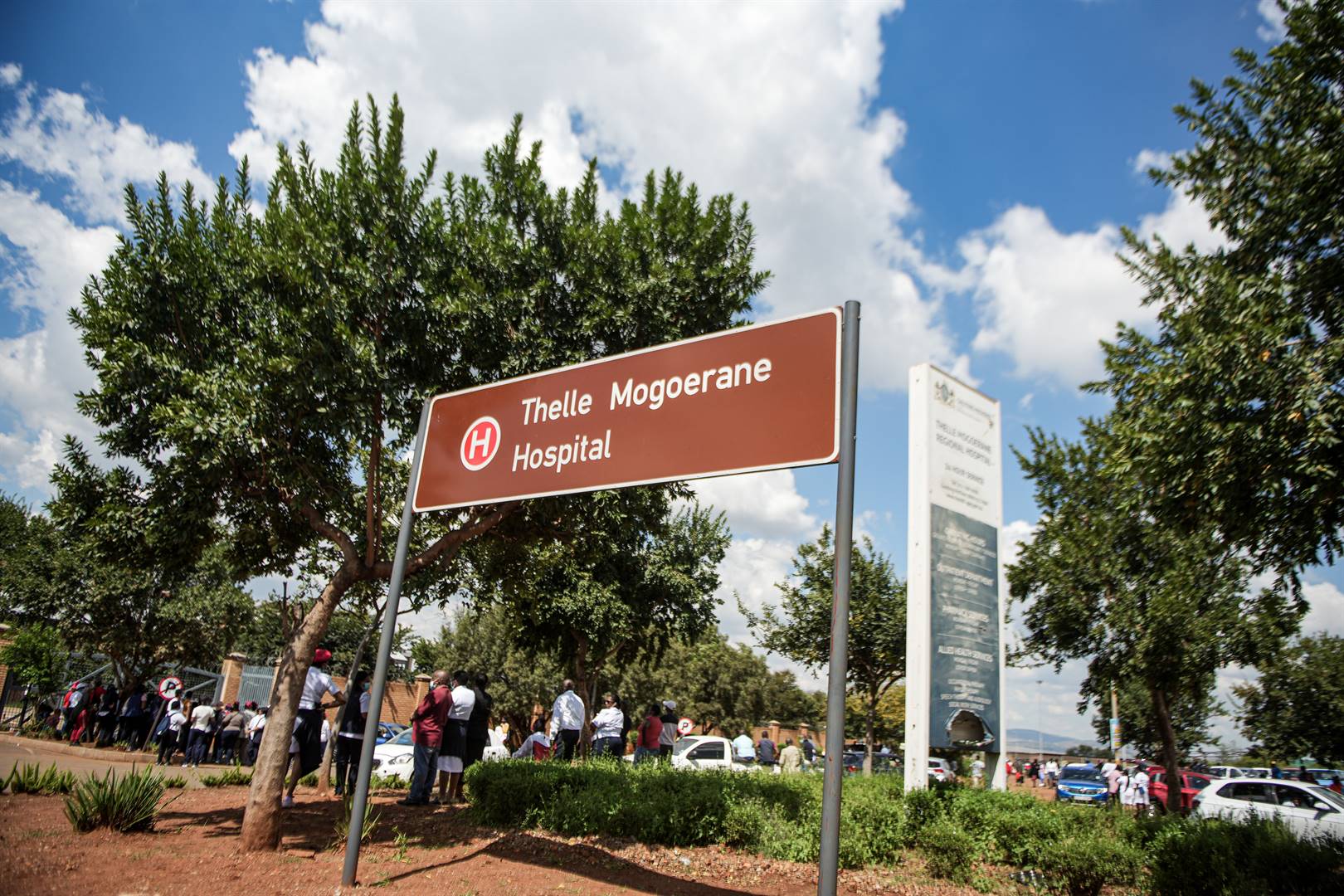 Patients of the Thelle Mogoerane Hospital are bearing the brunt of a shutdown at the facility. Patients collecting medication or who are scheduled to receive treatment have been denied entry. Photo: Rosetta Msimango/City Press

Regarding the absorption of Covid-19 contract workers, the memorandum added: “Since the start of the pandemic, these employees supported us and now the employer is turning a blind eye and is throwing them away like rotten potatoes. We demand that all employees who have been here since then be absorbed into permanent positions. The employer is prioritising academic hospitals over us.”

There is nothing we can do. We do not have the money.

temporary Covid-19 posts "to bring additional human resources to be able to provide sufficient care to patients to the citizenry".

According to the statement, while the department would have liked to retain all temporary Covid-19 appointed staff, "the current grant provided by the Gauteng Provincial Treasury to pay for compensation of temporary employees is inadequate to keep all workers when the Covid-19 contracts come to an at the end of March 2022".

"The Gauteng department of health received a Covid-19 budget amount of R2.2 billion for compensation of employees to respond to the pandemic during the 2021/22 financial year, the statement read.

"This amount has since been reduced to R1.1 billion for the 2022/2023 financial year. As a result, the department will not be able to renew all temporary contracts of various category employees who were recruited as part of the response to the pandemic."

“We are tired of society accusing us of killing their loved ones whereas we are overburdened, short-staffed and have no access to proper healthcare equipment for us to do our jobs properly,” she said angrily.

Meanwhile, patients were fuming as they had travelled long distances to the hospital to receive treatment.

We are here for our treatment, what must we do now? Must we die? South Africans need to know the truth about our deteriorating healthcare system and be made aware that nurses and doctors cannot be blamed.

Another healthcare worker who was employed by the hospital to assist with Covid-19 told City Press that what was happening to them “was not just hurtful, but disgraceful”.

“I have been here since the start of Covid-19 after several healthcare workers at the hospital either left because they were unable to continue their duties due to Covid-19 or lost their lives. Now, we are being kicked out and not recognised.”

Clinging to her one crutch, the healthcare worker explained that she’d been in the field for more than 10 years. She said using a crutch impeded her productivity.

“A nurse might attend to five to seven patients at a time because we are not enough. I might give a patient his or her medication, turn away for just a minute or two to attend to another, and when I go back to the first, the patient has died.

“That cannot happen. The healthcare system in this country is going to rack and ruin. We are now being discarded like we are nothing and have to deal with this while those in charge just look on. We deserve better.”

This article was updated on April 7 to reflect details around the Gauteng department of health's position on the absorption of Covid-19 temporary staff.