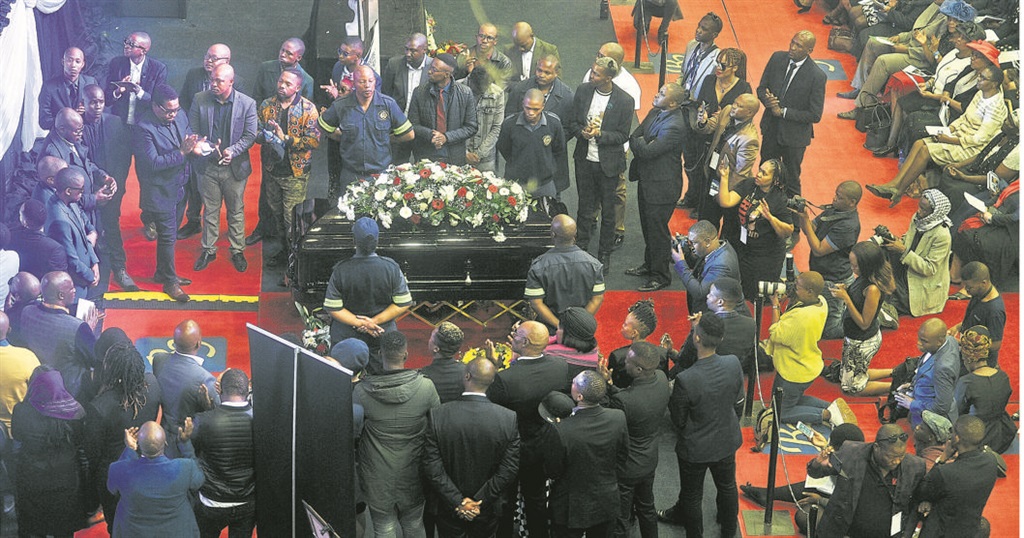 The drama that ensued after Jabulani “Hip Hop Pantsula” Tsambo’s death last week followed him to the grave yesterday.

Not surprisingly, chief mourner Lerato Sengadi was not recognised by the Tsambo family, even after Judge Ratha Mokgoatlheng ruled on Friday that she was the rightful wife in terms of customary law.

Sengadi’s name was nowhere to be seen in the obituary and at the cemetery she did not sit with the Tsambo family.

On Friday Mokgoatlheng ruled that Sengadi was the valid customary wife of Tsambo, who was popularly known as HHP, Jabba and the king of motswako.

The Johannesburg High Court judge based his ruling on the law that recognises three requirements for a customary marriage: “Lobola must be fixed; there must be a celebration; and the marriage must be entered into.”

However, Mokgoatlheng denied Sengadi’s urgent application to stop the funeral, saying the concept of the spirit of ubuntu, which is part of the law, wouldn’t allow him to interdict the funeral.

The judge gave Sengadi rights to the house in Randpark Ridge, which he accepted as the couple’s matrimonial home. HHP’s wife, Lerato Sengadi, sits with her mother at his funeral at the Mmabatho Convention Centre in Mahikeng Picture: Rosetta Msimango

Mokgoatlheng ruled that she be given access to the premises after HHP’s father had changed the locks to prevent her from accessing the property.

At the funeral in the Mmabatho Convention Centre in Mahikeng, it was evident that Tsambo’s family refused to recognise Sengadi.

Jabba’s sister, Ayanda Tsambo, accompanied by her younger sister Zanele and Tsambo’s son Leano (14) on stage, shared her fondest memories about her brother. HHP’s mother, with his son Leano and Leano’s mother at the funeral. Picture: Rosetta Msimango

Ayanda acknowledged everyone, including his helper, Mam’ Esther, who raised Leano from the time he was eight-months-old, and his fans but did not say a word about Sengadi.

However, nothing could stop Sengadi paying her last respects to her husband of two years.

She made a grand entrance when she walked in the convention centre, accompanied by her mother and friends.

Dressed in black with big sunglasses, she was ushered to sit in the same row as the Tsambo family.

But there was no eye contact between the Tsambos and Sengadi.

She broke down in tears at the Matlalong Cemetery in Mmabatho when the dark brown casket was being lowered into the grave.

She was comforted by her mother and friends. Later she was seen throwing soil into the grave and saying her final farewell. Sengadi’s attorney, Ndileka Sithole, confirmed her client was sidelined and blatantly disregarded as HHP’s wife by the Tsambos. “She went there for her husband, to try to get some closure and to pay her last respects to her husband.”

After her court victory on Friday Sengadi said she was pleased about the court’s decision. “This gives me an opportunity to do what I want for my husband and whatever he wanted me to do for him,” she said.

The Convention Centre was filled to capacity as hundreds mourners gathered to pay their last respects to the king of motswako.

What was supposed to be an emotional funeral service turned out to be the celebration of his music.

Musician Keabetswe “KB” Motsilanyane was the programme director for the service.

Speaker after speaker described the king of Motswako as a selfless, God-fearing man, who put Setswana on the map through his music.

His aunt Nomvulazana Sithole, described him as a humble and respectful nephew, who was always curious to know about his roots.

She recalled how he once took the initiative to go to Mozambique to look for the grave of his great-grandfather.

Motlapele Morule, who was “discovered” by Tsambo, recalled how HHP once told him: “In life don’t worry about what you want, but know what you don’t want.”

When you died, a part of me died

Although most people knew him by his popular names HHP or Jabba, to his family he was a son, father and brother.

His mother wrote a moving tribute, which was read by her longtime friend Bothepa Phaka.

“My son, when you died, a part of me also died. There was an incredible joy when you took your first breath. The 38 years I’ve known you, you started off being a son and then a good friend and confidant.

“I will cherish the good moments and long midnight chats and the gifts you showered on me and the whole family. We will cry. The tears will dry but the memories will live with us forever.”

Speaking of Tsambo, Ayanda told the mourners how she, as his younger sister, was her brother’s “first audience”.

“He was simple guy; he used to mop the floors at home. He would encourage me to be the better version of myself,” Ayanda said.

She said as a family they had been through a lot, but he always encouraged them and told them things would get better.

She described him as a perfect brother who had time, for the family as much as for his fans.

Why the recognition now?

Tsambo was always vocal about how Mahikeng, as his home town, did not contribute to his music career.

But Vuyisile Ngesi, the spokesperson for North West Premier Job Mokgoro, disputed this, saying North West had always appreciated Tsambo and his contribution to culture through the use of the Setswana language.

“We, with the SA Traditional Awards, honoured him with a lifetime achievement award for having been the embodiment of what the people of this province represent,” Ngesi said, adding that it was for this reason they had decided to give him an official civic funeral.

He said North West contributed R100 000 towards the rapper’s burial.

The money was used to pay for the venues for both the Mahikeng memorial and the funeral service.

The president of Impra, Dodo Monamodi, told the mourners yesterday that Tsambo was one of beneficiaries.

Monamodi said they would engage the family but would do so only after giving them a space to bury their son in dignity.

“Very soon we will be sharing with them statements for the royalties on behalf of Tsambo.” However, he did not divulge the amount the family would receive.

When asked why the group had waited so long to share information about Impra’s efforts to pay needle time royalties to performers, Monamodi said Impra had been waiting for the distribution plan to be approved by the Companies and Intellectual Property Commission (CIPC).

It was approved only two weeks ago.

He said it was a “critical process” in which Impra had to submit a distribution plan and then write a report after it had distributed the royalties.

“As a new collecting society we intend to do things properly, thus we had to submit a distribution plan to the CIPC.”

He said it had been “a historical challenge” for artists to be paid royalties. “But Impra as a game-changer is committed to pay the local performers and producers.”

Related Links
HHP’s last note to dad
Tributes pour in for King of Motswako
The maestro of Maftown, RIP Jabba
Share
Next on City Press
Post office board chair threatens Ndabeni-Abrahams with legal action over ‘abuse of power’