How black and white farmers are coming together Programme gives the subsistence farmers access to 90 of South Africa’s most successful commercial farmers, who serve as their mentors

It’s a story that begins on 1ha of land deep in the rural Eastern Cape.

It’s a story that’s been there for 20 years now, but which you’ve not been told.

There, on that 1 hectare of land, is everything that South Africa can be.

And there are 12 859 black farmers on their 1ha of land who are what this story is all about.

He is the one of the 171 new black commercial farmers who are also the most positive story in South African farming and land reform that you’ve not heard of.

“This is not window dressing,” Mathebula says emphatically.

“I won’t go for that. I’m the product of a white commercial farmer – Mr Pieter Vorster – who mentored me on grain farming.

Programme gives the subsistence farmers access to 90 of South Africa’s most successful commercial farmers, who serve as their mentors.

“I’ve seen how farmers are willing to help. But unfortunately these good stories don’t travel as quickly.”

The 12 859 and the 171 represent a 20-year investment of pure passion and faith by the farmers who fall under the auspices of Grain SA to achieve the one thing they all believe in.

“We have a strong belief that the farming community can heal one another and heal the country,” says Jannie de Villiers, the chief executive of Grain SA.

Farming in South Africa seems as fractured as it’s ever been.

From the negative newspaper headlines comes a public perception that farming is divided and that the story of land is one of heartache, anger and resentment.

But for the past 20 years the farmers of Grain SA have looked deep into their own souls and reached out even deeper into their communities to try to prove that farmers have their own solution to land reform.

And they’re making it work with a R25 million a year operational budget and managing a further R120 million worth of projects on a farming development programme that is changing lives.

It now supports 12 859 black subsistence farmers – half of whom are women – from nine offices nationwide, and it has already created 171 new black commercial farmers producing 250 tons or more of maize annually.

“At the moment we’ve reached a great opportunity where black and white farmers are coming together to make sure the farming community of South Africa works,” says Mathebula.

“On the ground we work together. The white commercial farmers have the experience and they can and are willing to transfer. Colour is not an issue for us. It’s about being productive on our land and feeding the nation. I’ve worked with people of all races in farming and we are coming together like never before to make the farming community better, starting with skills transfer and programmes like the ones Grain SA is running.”

Driven by their belief to use farming to heal South Africa rather than divide it, Grain SA sponsors mobile units that travel into the most rural communities to offer clinics to teach skills, such as welding, grinding and painting, as well as how to service a tractor or repair farm equipment.

The programme has spawned a partnership with the science and technology department to develop small portable threshers so that these farmers can harvest their crops without having to work their thumbs till they bleed.

And another partnership with Sasol provides these farmers with bags for their harvest so that it doesn’t lie on the ground where it is subject to a mould that can cause serious illness.

But most importantly, this programme gives the subsistence farmers access to 90 of South Africa’s most successful commercial farmers who serve as their mentors.

They travel by bakkie deep into these communities with the sole aim of helping an old black woman, barely surviving on 1 ton of maize a year from her 1ha of land, and using their science and expertise to make that same piece of land yield up to 8 tons of maize a year. 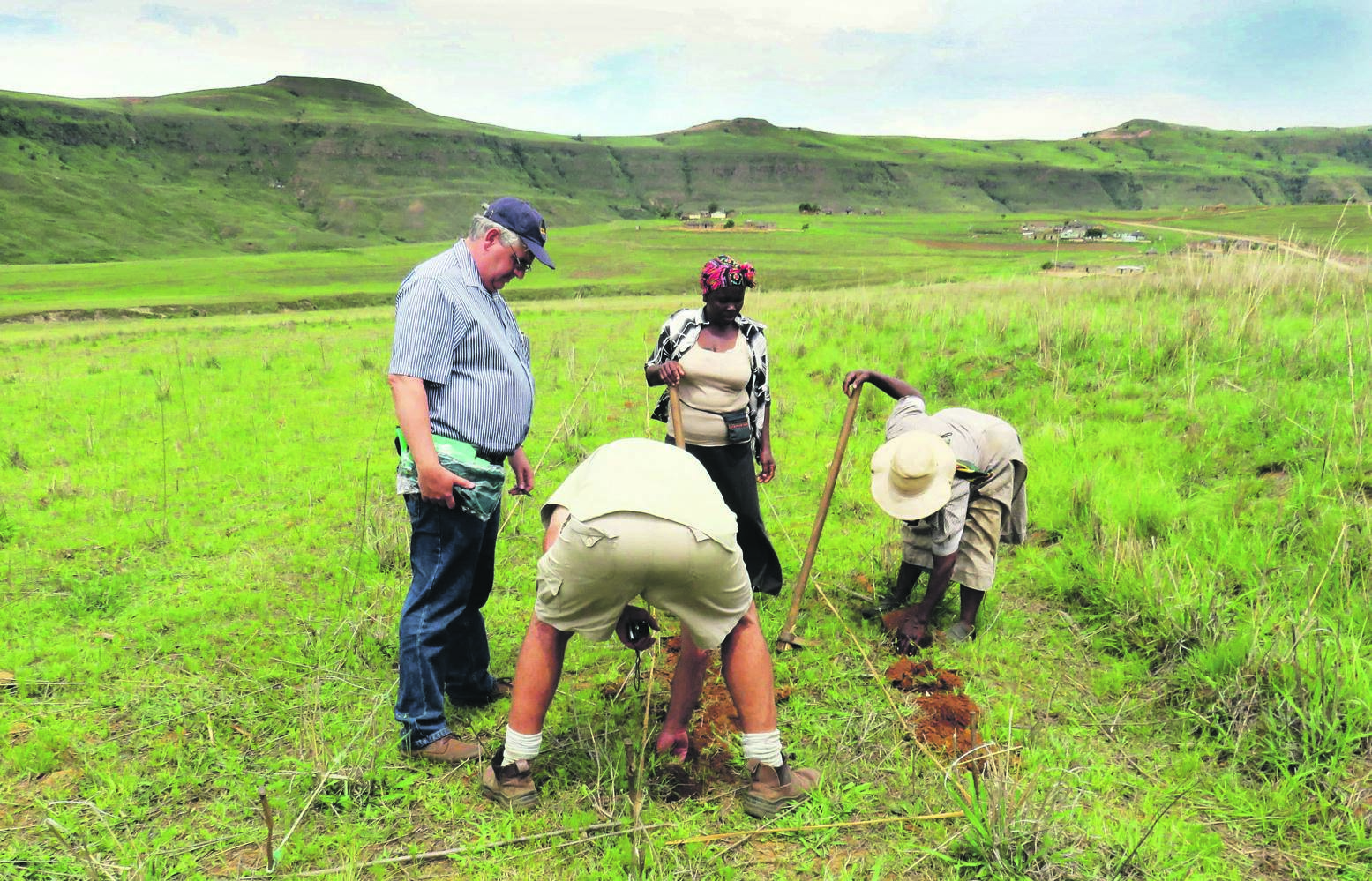 Jannie de Villiers, the chief executive of Grain SA, leads by example, showing local farmers how it is done

“You change that person’s life permanently because now he or she is not just living from hand to mouth, but actually making a profit by selling,” says De Villiers, who leads the development programme’s team.

“I’ve asked these women farmers what they did with the extra money they earned. It brings you to tears.

“One old woman told me she bought herself a bed. She’d never slept on a bed in her life. Another bought a fridge and another new school uniforms for her kids. That’s how farming alleviates poverty.

“These are the untold stories of farming in South Africa. That’s the real story of land reform nobody is telling. And that’s why we say agriculture can heal South Africa, because I’ve seen how these farmers bond with their communities around farming and are helping one another.”

But the story of land in Africa is a complex one.

It’s an often one-sided conversation with a narrative that feeds political machinations and a tribal view of power, instead of people.

It’s also a story of politics and that makes things difficult for everyone involved.

“The subsistence farmers we support plant only 30% of their land because they cannot get bank loans to grow their operation. They work on communal land, so they have no title deeds. And that means they have no security to offer a bank to get finance to grow their potential,” De Villiers says.

“The National Credit Act says you cannot loan to anybody who has no security and these farmers can offer no security without title deeds for the land they’re on. So we cannot help them get this land into full production for their benefit. We can only help them to use 30% of their land, while the rest just lies fallow. That’s not real land reform and that’s what we’re campaigning to change. We have vast tracts of untapped communal land that we can develop to the benefit of these communities long before we get to the commercial farming land. We can solve this thing. If you give these thousands of subsistence farmers on communal land title deeds, you transform farming in South Africa right there.”

As frustrating as the situation is for De Villiers and his team at Grain SA, he still believes in the words of South African mega-farmer Kallie Schoeman who says: “As a farmer, you can run out of money but you must never run out of plans.”

“We are motivating at government level for an agricultural development fund where we can help secure finance for these farmers without them having a title deed. We will still fight for title deeds for these farmers, but in the meantime we are making plans to find another way for them to grow out of their subsistence situation,” De Villiers says.

He knows full well that, as the stereotype of the white Afrikaans farmer, changing perceptions is as much a part of the battle as changing legislation.

“There are days when this is tough, when all you hear is the negative attitude towards farmers. But I’ve seen how black and white farmers can work together and love each other. And that’s because farmers are optimists at heart. The average farmer will go and get a loan for R10 million, put it in the ground and pray for rain. That faith is the same faith that can change people’s hearts.”

So while the headlines and politicians might still tell only part of the story of South African farming, there is a 1ha piece of land in the Eastern Cape where a commercial farmer and an old Xhosa woman are telling the other side of the story.

And the seeds they’re planting together are quietly growing into the new story of an African farm.

We live in a world where facts and fiction get blurred
In times of uncertainty you need journalism you can trust. For only R75 per month, you have access to a world of in-depth analyses, investigative journalism, top opinions and a range of features. Journalism strengthens democracy. Invest in the future today.
Subscribe to News24
Related Links
Dlamini-Zuma on fact-finding mission at one of SA’s most successful farms
Farming hard and smart
He turned farm into a success but Mpumalanga department wants it back
Next on City Press
Rosemary Ndlovu’s boyfriend died two weeks after she had allegedly enquired about his insurance premiums

Sign-up to our newsletters and get the latest results and info in your inbox.
Voting Booth
Some parts of the City of Johannesburg have become dilapidated, with potholes, piles of garbage and the stench of urine now being the prominent features of these areas. Who is responsible for the deteriorating state of these areas?
Please select an option Oops! Something went wrong, please try again later.
Government failure
79% - 27 votes
Residents
9% - 3 votes
Overpopulation
12% - 4 votes
Previous Results
The best of 2020
Can you guess who featured in our most popular articles from 2020?