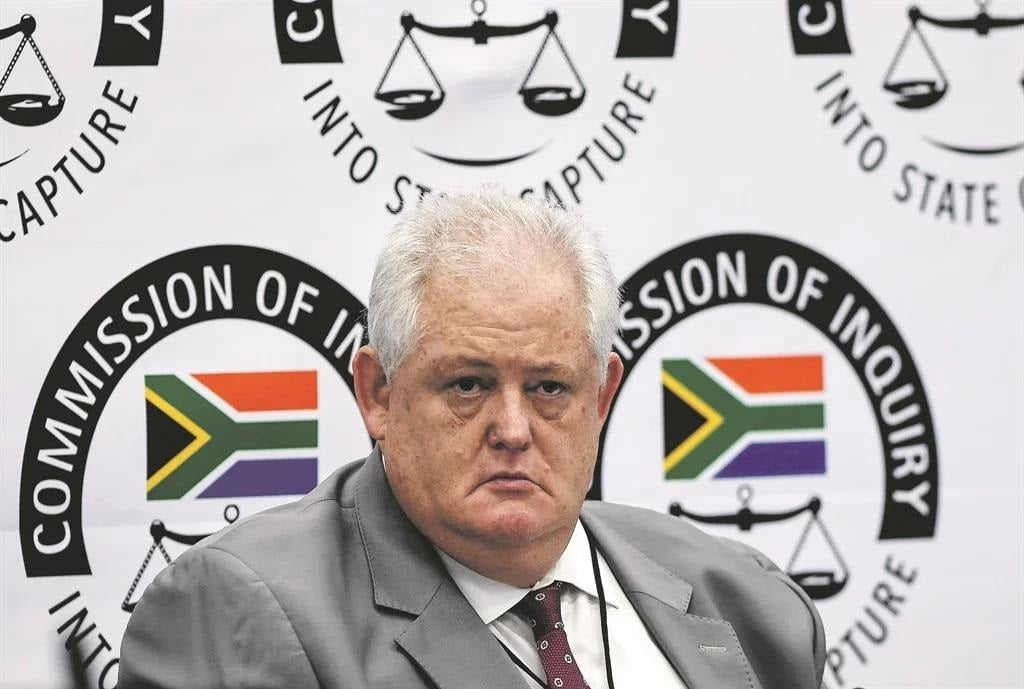 Angelo Agrizzi’s racist rant at the commission for inquiry into state capture won’t be forgotten. The South African Human Rights Commission intends to initiate legal proceedings against him in the Equality Court.

This week, Agrizzi’s racist tirade – which City Press reported on in September last year – was played again for the commission.

The audio recording was at the centre of a crimen injuria case opened by Agrizzi’s former colleagues, Johannes Gumede and Papa Leshabane.

In the voice recording, of which City Press has a copy, Agrizzi can be heard making reference to “k****rs” several times.

He questions why there was a need in the company for “Joe”, seemingly referring to Gumede, and “Pap a”, referring to Leshabane.

“What you need Papa for? ... You don’t need Joe ... what you need him for? ... What I’m saying to you [is] what I can’t understand is how on earth your father listens to Papa and Joe,” said the voice on the audio.

“Those k****rs ... I’m telling you they are k****rs alright because they are screwing your father with information that he shouldn’t listen to ...”

The speaker then seems to be convincing the Watsons – the children of Bosasa’s chief executive, Gavin Watson – to remove them from the company.

In another section of the recording, he tells the Watsons how much he had done for their father as the business was being built.

“Those k****s have done nothing for your father. What is it that they are holding over his head? What is it?”

He threatens to “go personally to that company” to deal with his former partners.

At another point, referring to Leshabane, he says: “That k****r just needs a good hiding...”

The commission called his conduct “particularly egregious, hurtful, uncalled for and it is the kind of instance which would embolden like-minded individuals if no action is taken or sanction is meted out”.

It was the commission’s view that this amounted to hate speech and, in the public interest, it intended to seek appropriate relief including an order for payment of damages and an order directing the clerk of the Equality Court to submit the matter to the director of public prosecutions for the possible institution of criminal proceedings against Agrizzi.

One of Agrizzi’s final acts before the state capture commission was to hang his head in shame, proclaim that he knew he was a racist and plead that his entire testimony not be judged based on this one fact.

Deputy Chief Justice Raymond Zondo said that Agrizzi’s comments on the recording were extremely offensive and totally unacceptable, but that did not mean he would not examine Agrizzi’s evidence and decide whether he was telling the truth throughout his testimony.

She was ordered to fork out R150 000 for her remarks on Facebook relating to a Durban beach.

In response to Sparrow’s racist comments‚ government employee Velaphi Khumalo said he would cleanse the country of all white people.

A case of crimen injuria was opened against him‚ and 19 complaints were lodged at the human rights commission.

Khumalo was suspended and subjected to a disciplinary hearing.

He pleaded guilty to misconduct charges and committed himself to corrective measures‚ which included counselling. He was given a final warning and returned to work as a sports promoter.

Another estate agent, Vicki Momberg, was recorded in an angry tirade aimed at a policeman who was trying to help her after a smash and grab incident in Johannesburg.

Momberg was caught on video shouting “One k***** is bad enough. This happens all the time‚ all the time. The k***** here in Joburg are terrible. I’m so sick of it.”

The police officer lodged a complaint with the human rights commission, which in turn lodged a case with the Equality Court.

The human rights commission also indicated that it would pursue the case against Adam Catzavelos, who posted a video of himself celebrating the lack of black people at what is believed to be a Greek holiday destination, where he repeatedly uses the k-word.

The social fall-out was swift. The Catzavelos family business, St George’s Fine Foods, saw a number of companies they work with terminate their contracts and another of the family’s businesses, The Smokehouse and Grill, situated in Braamfontein, closed down. Catzavelos said he had no plans of returning to South Africa.

We live in a world where facts and fiction get blurred
In times of uncertainty you need journalism you can trust. For 14 free days, you can have access to a world of in-depth analyses, investigative journalism, top opinions and a range of features. Journalism strengthens democracy. Invest in the future today. Thereafter you will be billed R75 per month. You can cancel anytime and if you cancel within 14 days you won't be billed.
Subscribe to News24
Related Links
I’m-a-racist Agrizzi hands over state capture stand to ‘fearful’ Van Tonder
State capture: Agrizzi is giving the ANC sleepless nights, says Mbalula
Dudu Myeni implicated as exec tells how ‘corruption became normal at Bosasa’
Next on City Press
Monkeypox: Our top 10 questions answered

Listen to our latest podcasts.
Voting Booth
According to a letter Health Minister Joe Phaahla sent to MECs, the country is ready to get rid of masks in public as a health protocol. Is it time to go maskless?
Please select an option Oops! Something went wrong, please try again later.
About time
68% - 50 votes
No
32% - 24 votes
Previous Results