‘I think we’re going to kill each other tonight’: Coligny burns after bail hearing 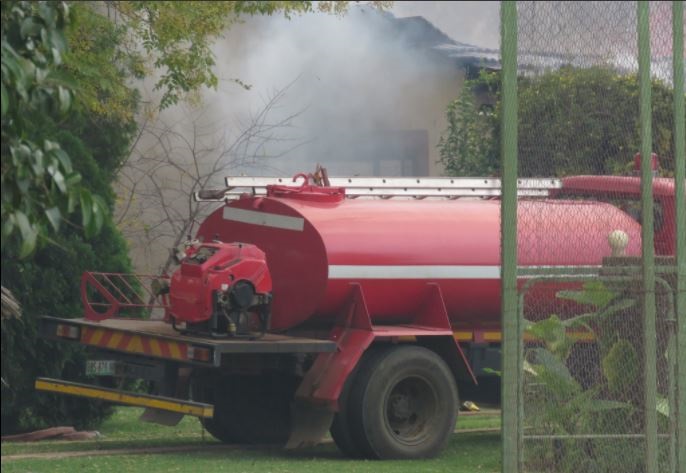 A house was set alight in Coligny following a magistrate’s decision to grant bail to two men accused of killing a young man.Picture: Poloko Tau

Hours after the Coligny Magistrates’ Court had granted bail to two men accused of killing a local youngster the area was plunged into chaos.

Two houses were torched and police were hard at work keeping angry residents away from farms and businesses.

A police helicopter hovered above the area as officers on the ground engaged in running battles with residents of Tlhabologang township, on the outskirts of the small farming town.

After setting fire to one farmhouse, residents moved to another not far away but police arrived just in time, before they could strike.

Earlier, community members arrived after part of the thatch roof at one house was gutted by flames but managed to put it out before it spread.

Rubber bullets and stun grenades were used to disperse the crowd, only for them to regroup and surge towards the police.

Residents were not happy that Magistrate Makgaola Foso granted the two men bail after they submitted to court more than 450 signatures opposing their bid.

The court had earlier last week seen another petition with 130 signatures of members of the white community supporting the two’s bail application.

Back in town, a group of township residents were seen trying to approach a convoy of bakkies driven by white farmers, alleging they had pointed guns at them earlier before driving off.

“I think we are going to kill each other tonight. Coligny will never be the same until these farmers change their attitude towards us … their brothers get bail and they still come and point guns at us,” one resident said.

Local residents could be seen driving up and down with water tanks on town ready to help whenever reports of fire comes through.

There were reports of more police officers expected to be deployed to Coligny tonight, amid signs that more properties might be attacked.

We live in a world where facts and fiction get blurred
In times of uncertainty you need journalism you can trust. For only R75 per month, you have access to a world of in-depth analyses, investigative journalism, top opinions and a range of features. Journalism strengthens democracy. Invest in the future today.
Subscribe to News24
Related Links
Coligny burns again, moments after men accused of murder are granted bail
‘We’ll bury the boy, be back on Monday’ when Coligny men find out about bail
Coligny boy identified, family found
Next on City Press
‘Horror movie’ case ends with 25-year prison sentence for Nosicelo Mtebeni’s killer