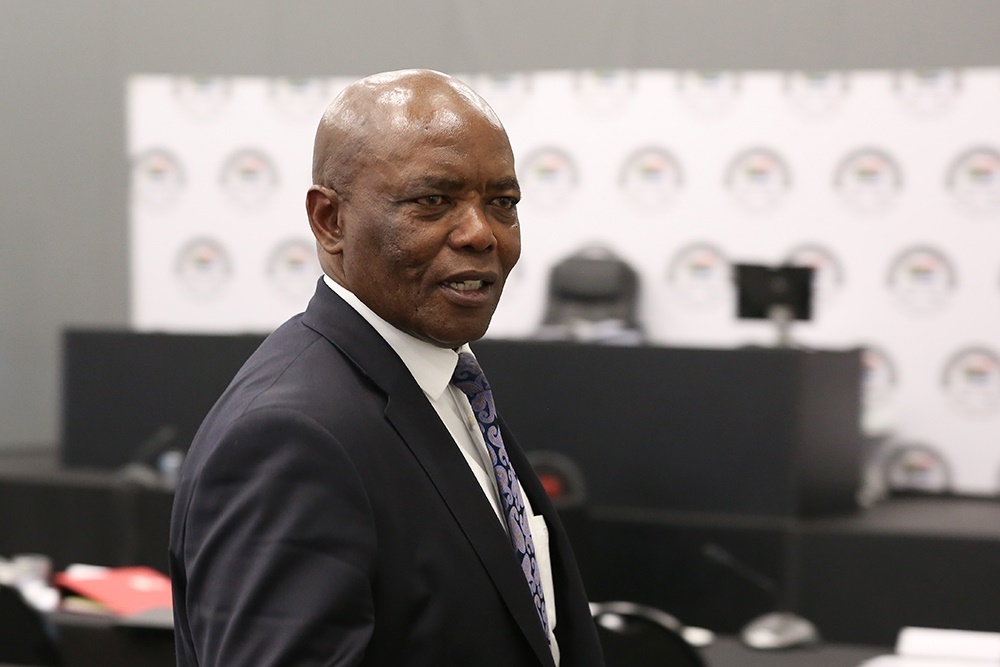 Senior government official Bruce Koloane during his testimony at the commission of inquiry into state capture. Picture: Gallo Images

Former head of state protocol Bruce Koloane has admitted to having name-dropped former president Jacob Zuma and other ministers to pressure officials to expedite the processing of flight clearance requests for the Waterkloof Air Force Base landing used by the Gupta family in 2013.

Koloane was continuing his testimony at the Zondo commission to explain his role in the Waterkloof landing.

On Monday, Koloane was given an opportunity to listen to classified recordings to refresh his memory. Only after listening did he admit to name-dropping to put pressure on the officials to do the processing.

Koloane, who is now South Africa’s ambassador to the Netherlands, testified that “having listened also to the recording, I would like to admit that indeed I did what has now become popularly known as name-dropping and used those sentences merely to push the officials, who were supposed to process the flight clearance, to do their job and to do the processing”.

He admitted that it was abuse of his portfolio to allow the Guptas to land at Waterkloof.

When Koloane was asked by Deputy Chief Justice Raymond Zondo to respond to allegations set out by the disciplinary committee, which he faced at the department of international relations and cooperations a month after the landing in April 2013, he pleaded guilty to charges relating to abuse of power in helping to facilitate the landing.

“I indicated that at no stage did the ministers of transport and defence, or the president in any way communicate with me, either by themselves or through anyone in their office. But at no stage did I have control of diplomatic channels,” Koloane said.

Zondo asked Koloane if he knew about his responsibility to clear Zuma of the allegations of his connection to the Waterkloof landings after Koloane admitted to name-dropping without reason.

“I should have written letters of apology to former president Zuma and the two ministers. This is something I may consider now, although it may be too late. I am too ashamed to apologise face-to-face,” Koloane said.

We live in a world where facts and fiction get blurred
In times of uncertainty you need journalism you can trust. For only R75 per month, you have access to a world of in-depth analyses, investigative journalism, top opinions and a range of features. Journalism strengthens democracy. Invest in the future today.
Subscribe to News24
Related Links
'I am still too ashamed to face Zuma', Koloane explains at #StateCaptureInquiry
WATCH LIVE: SA ambassador, Bruce Koloane, back in the hot seat as state capture inquiry resumes
Report into Gupta Waterkloof landing 'smells fishy' - Bruce Koloane tells Zondo commission
Next on City Press
No textbooks for pupils on first day of school in Eastern Cape