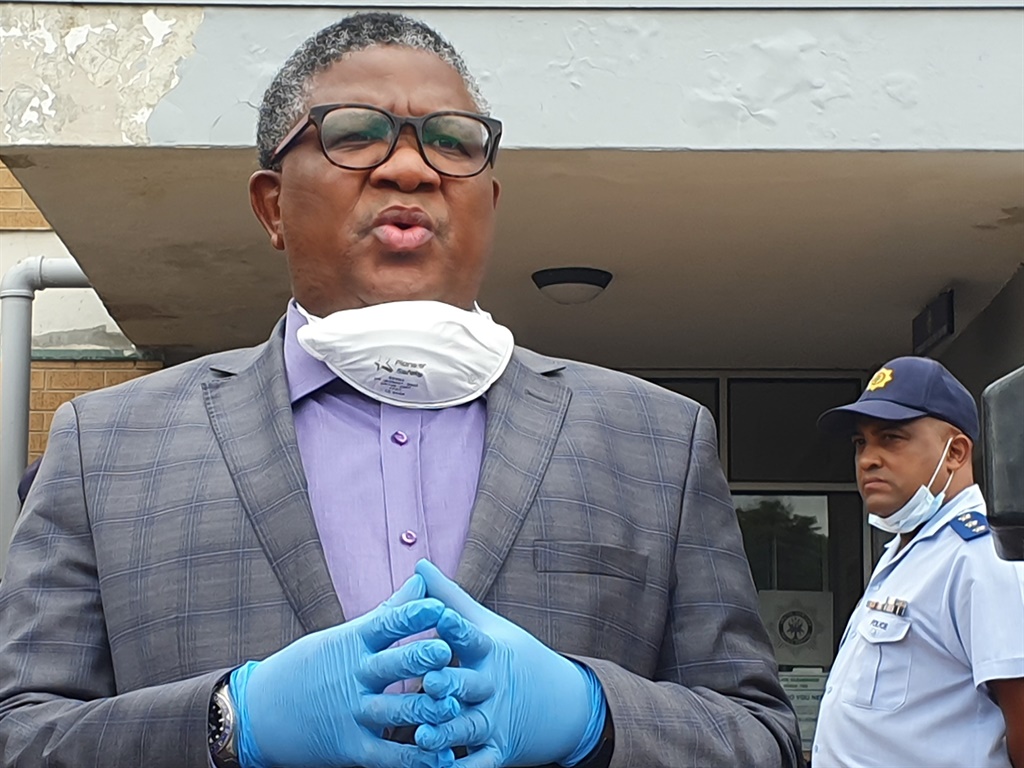 Transport Minister Fikile Mbalula has justified his laying of charges against television personality Somizi Mhlongo as having been necessitated by principle and the current environment of uncertainty owing to the Covid-19 coronavirus pandemic.

“I am a minister of the state; it is not about whether we know each other or not, it is not about Mbalula and Somizi, it is about the law and the crisis we are facing as a country.

“Had there been unrest in the country because of the video, I indirectly would have been blamed for it,” Mbalula told City Press, on Friday morning after opening a case against Mhlongo at Sandton Police Station.

If it is a joke, it is a bad joke. Mr Mhlongo has been a good friend of mine, but I cannot give the impression that I mix business with pleasure
Fikile Mbalula

The charges, according to the minster include the contravention of the Disaster Management Act, fake news and misinformation peddling.

Mbalula resorted to opening a case after Mhlongo was heard on a video that went viral saying that Mbalula had told him that the nationwide lockdown would be extended, prior to this announcement being made by President Cyril Ramaphosa on Thursday.

Although Mbalula said he accepted Mhlongo’s public apology, which has also gone viral, the minister emphasised that his position as minister is what took precedence.

“Somizi has apologised and we have accepted the apology,” Mbalula told the media outside the police station.

“But the reason we are at the police station is to report this matter because as a Cabinet minister I have been sworn to secrecy and there must be no doubt in relation to information that could be disclosed to me as a person and as a minister.”

In his explanation about what transpired, Mhlongo said the notion that Mbalula had divulged information regarding the extension of the lockdown to him was “a joke” and that he “did not know about the extension just like everybody else”.

However, addressing this, Mbalula said: “If it is a joke, it is a bad joke. Mr Mhlongo has been a good friend of mine, but I cannot give the impression that I mix business with pleasure.

“The police station is the right place to be because I did not break the law. When that [conversation between Mhlongo and radio presenter Dineo Ranaka] happened I was at my place, obeying the rule of law and doing my job as a minister.”

“I have followed procedure and the matter is now in the hands of the police to investigate. I have engaged law enforcement.”

It doesn’t matter who is right or wrong, what matters is that someone possibly had a discussion about Cabinet matters. If the minister did, it is a breach of security
Tshepo Matseba, a reputation management specialist

According to Tshepo Matseba, a reputation management specialist and managing director at Reputation1st, “someone must be held accountable”.

“Granted that Mbalula has denied ever speaking to Somizi regarding what [the latter] has called a joke, today Mbalula will open a case again Somizi. The fact is that this discussion is taking place; it doesn’t matter who is right or wrong, what matters is that someone possibly had a discussion about Cabinet matters. If the minister did, it is a breach of security clearance, requirements and regulations.

“I am not suggesting that anyone is guilty, but someone needs to be held accountable because this type of information and this type of a breach is a possible risk for the 58 million South Africans who are in lockdown and are battling to combat the spread of Covid-19.

“It is my view that it is irresponsible for any public official, particularly Cabinet ministers, as well as any celebrity or influencer to make comments about this virus when we have clear protocol on who speaks on these issues and when.

“Just like all perpetrators, the best thing for [Mhlongo] to do is present himself to the nearest police station because making a joke about Covid-19 and the president’s announcement is, by extension, an admission of guilt.

“As leaders, we are accountable to millions of our followers and we ought to act responsibly. Covid-19 is a threat to humanity. We can’t afford to be caught off-guard.”

Earlier this week, a controversial image posted by former ANC MP Mduduzi Manana on Instagram, revealing Communications, Telecommunications and Postal Services Minister Stella Ndabeni-Abrahams sharing a meal with him and others, led to a social media frenzy, with many calling for decisive action to be taken against her as her actions contravened social distancing rules put in place to curb the spread of Covid-19.

Ramaphosa subsequently placed Ndabeni-Abrahams on special leave for two months, one of which will be unpaid.

We live in a world where facts and fiction get blurred
In times of uncertainty you need journalism you can trust. For only R75 per month, you have access to a world of in-depth analyses, investigative journalism, top opinions and a range of features. Journalism strengthens democracy. Invest in the future today.
Subscribe to News24
Related Links
‘I can’t give an impression that I mix business with pleasure’ – Mbalula
Mbalula announces relaxation of lockdown rules on cargo and technical flights
Public transport preventive measures will slow down Covid-19 – Mbalula
Next on City Press
Focus vaccines on over-50s to survive a fourth wave – SA health experts

Sign-up to our newsletters and get the latest results and info in your inbox.
Voting Booth
Some parts of the City of Johannesburg have become dilapidated, with potholes, piles of garbage and the stench of urine now being the prominent features of these areas. Who is responsible for the deteriorating state of these areas?
Please select an option Oops! Something went wrong, please try again later.
Government failure
76% - 190 votes
Residents
10% - 24 votes
Overpopulation
14% - 36 votes
Previous Results
The best of 2020
Can you guess who featured in our most popular articles from 2020?