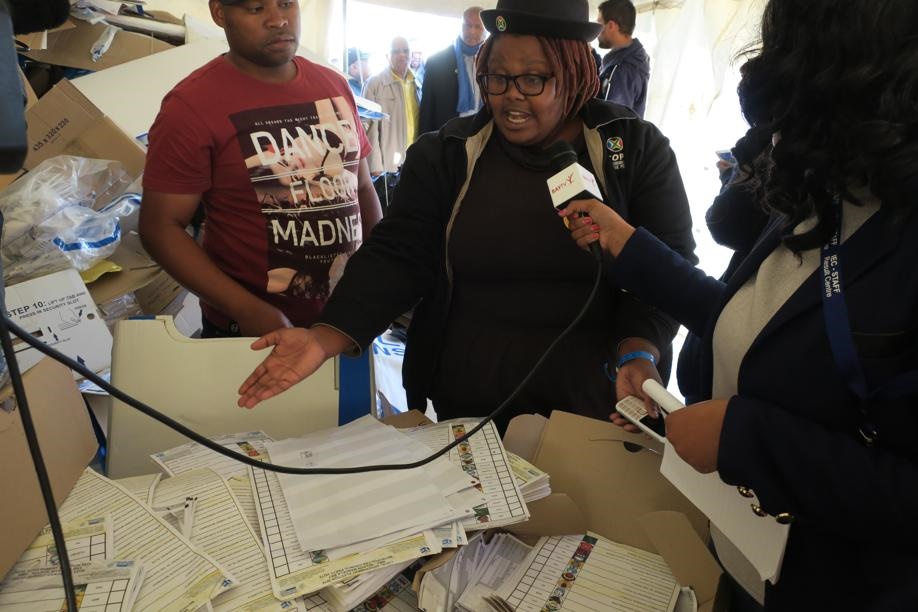 There was commotion outside an IEC results centre in Nelson Mandela Bay this afternoon after political parties discovered marked ballot papers at a tent outside the venue.

The ballot papers were found abandoned at the tent. They had Independent Electoral Commissions stamps on the back and Xs were placed near the logos of different political parties, including the ANC, Democratic Alliance and Congress of the People.

Former Nelson Mandela Mayor Nceba Faku, who was one of the first political leaders to arrive at the tent, was heard saying: “This is typical political fraud.”

The discovery of the ballot papers came as the ANC trailed the DA at the Nelson Mandela Metro at about 5pm. The DA was at 49.4% while the ANC had 39.2% of the votes.

Crosby Bacela, the regional IEC supervisor, said the ballots were put there deliberately.

Bacela agreed that “any ballot that is exposed or naked is regarded as serious”.

He said they would take the ballots and put them back safely in the box.

“I was inside and busy with the capturing, that when I was actually told. So, what we will do now is to speak to the warehouse people so that we put them in the boxes,” Bacela said.

Meanwhile, S’thembile Cele reports that the results of the Nelson Mandela Bay metro will be declared tonight.

Deputy chief electoral officer Simon Mamabolo said the marked papers found in Nelson Mandela Bay were in the “custody” of the IEC and there was no cause for alarm.

Mamabolo was at pains to explain that the commission continued to act with integrity and no one should be concerned
He added that political parties had 48 hours to lodge disputes, and the commission hoped to have dealt with disputes by the end of counting on Saturday.

We live in a world where facts and fiction get blurred
In times of uncertainty you need journalism you can trust. For only R75 per month, you have access to a world of in-depth analyses, investigative journalism, top opinions and a range of features. Journalism strengthens democracy. Invest in the future today.
Subscribe to News24
Related Links
Cops step in as ANC, UDM clash over voter ‘hijacking’
‘Cry baby’ ANC vs ‘history distorting’ DA: Battle for Nelson Mandela Bay hots up
Murder and death threats in Nelson Mandela Bay
Next on City Press
MUT lecturer guilty of sex for marks

Sign-up to our newsletters and get the latest results and info in your inbox.
Voting Booth
President Cyril Ramaphosa has announced that SA’s vaccine passport plans are coming on. What are your thoughts?
Please select an option Oops! Something went wrong, please try again later.
We cannot be forced
28% - 64 votes
It’s critical
24% - 55 votes
Vaccines save lives
47% - 106 votes
Previous Results
The best of 2020
Can you guess who featured in our most popular articles from 2020?