KwaZulu-Natal residents living in the shadow of a serial killer 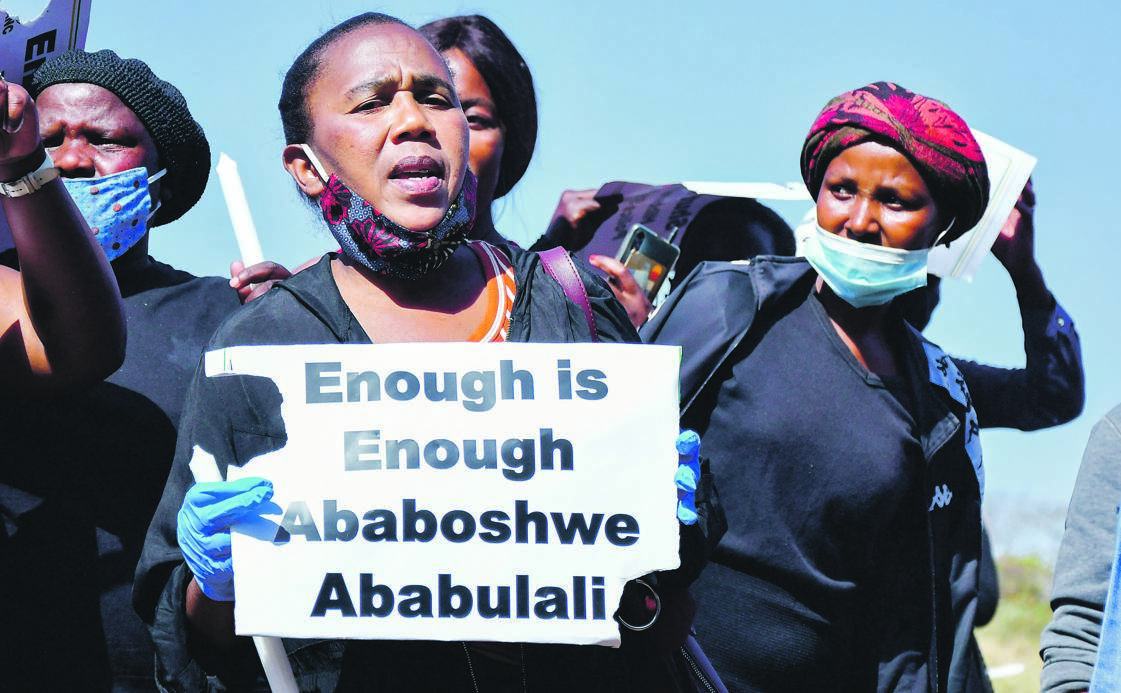 Residents of Mthwalume in KwaZulu-Natal protest during Police Minister Bheki Cele’s visit on August 15 to an area where the serial killer dumped one of his victims. Community members believe the killings are continuing, despite a man confessing to the murders. Picture: Gallo Images

The charred remains of a sixth woman, who is as yet unidentified, were found last week, but police have ruled that killing out from being part of the series, instead telling City Press it was an “isolated incident that occurred recently”.

The dominant narrative in the community – which City Press visited this week – is that the killings are linked to muthi and that whoever was responsible for the murders of sisters Nosipho (16) and Akhona (25) Gumede, Neliswe Dube (23), Zama Sylvia Chiliza (40) and an as yet unidentified woman believed to be in her late thirties was doing so at the behest of a rogue sangoma.

The community is not convinced [that the killer acted without instruction], and there is still a lot of fear, real fear,
Activist and Ugu District Municipality PR representative Leonard Ngcobo

“The community is not convinced [that the killer acted without instruction], and there is still a lot of fear, real fear,” City Press was told by activist and Ugu District Municipality PR representative Leonard Ngcobo, who also lives in the area.

The corpses were found in the rural Mthwalume area and surrounds, which mostly consists of sugar plantations and scrubland, peppered with small but dense forested areas that are used as thoroughfares by community members.

It was here that the prime suspect, Mduduzi Khomo (41), allegedly stabbed Dube twice in the neck. According to national police spokesperson Vishnu Naidoo, Dube was reported missing on June 28 and her partially decomposed body was discovered by hunters on July 6.

Chiliza’s murder was reported on June 28. She was allegedly strangled and her body was decomposed when it was discovered.

READ: Families of femicide victims call for the death penalty

The as yet unidentified woman was found “with a scarf around [her] neck”, according to Naidoo, ostensibly an indication of strangulation.

The bodies of the Gumedes – said by Naidoo to be sisters – were found on April 25. They were reported missing by their family on March 28. Clothing found at the scene was used to identify the siblings, but City Press understands that the cause of death could not be determined due to advanced decomposition.

Khomo and Gcina Njilo (34), both employees at the newly built Global petrol station on the R102 in ward 15, which runs alongside the N2, were both arrested for their alleged involvement in the killings.

“He was a very quiet guy. There was nothing suspicious about him,” garage manager Xolani Mhlangu told City Press when asked to describe Khomo.

Mhlangu said residents were still scared, “but a little bit relieved as well”.

He brushed off any rumours of the killings being muthi-related.

“No, I don’t think it was anything like that.”

A female employee told City Press: “I only knew them here at work, but nothing was off.”

The woman said she was “shocked” when police confirmed that Khomo was the feared killer, and said residents in her ward were “still very scared” because they believe there are some others [serial killers] out there”.

Khomo hanged himself while in custody, but not before making a full confession and admitting to killing more victims, Police Minister Bheki Cele said last month.

He allegedly also absolved Njilo of involvement in the killings, saying he had acted alone and had given Njilo a cellphone belonging to one of the victims because he was poor and Khomo felt sorry for him.

It was because of his being in possession of the cellphone and SIM cards that police initially suspected Njilo of being one of the killers, despite the rareness of serial killers working in tandem.

Naidoo told City Press that “[Khomo] was not wanted for any [prior] case and doesn’t have a criminal record”.

Njilo has not been charged with any of the crimes because of a lack of evidence, and was released. City Press was unable to locate him, but he previously told TimesLive that having his name and photo circulated on social media led to death threats against himself and his family. He claimed that, as a result, he was in hiding.

Three of the crime scenes are in easy walking distance of the petrol station, one is only 300 or so metres away – a slightly dry area with well-fed cows ambling about when City Press visited the scene, but no doubt lush and inviting in the summer months.

Three of the bodies were found on a sugarcane farm belonging to farmer Siya Gasa, where he lives with his mother and sisters. The charred remains of the most recent victim were found on the boundary of Gasa’s land. The farm borders the petrol station.

Gasa told City Press that among his workforce were 15 women who were still scared. When the bodies started being discovered, he put up a R20 000 reward for information that could lead to the arrest of the perpetrator.

According to the results from the doctor [autopsies], no body parts were removed from the victims
National police spokesperson Vishnu Naidoo

“There is fear all over. [My sisters] say they don’t feel safe, but we have security guards. I feel bad for the people in the community because, for them to move from point A to point B, they need to catch a taxi and sometimes they need to walk. Their lives changed in seconds. Mthwalume is just not the same any more,” said Gasa.

He refused to comment on the rumours that the murders were muthi-related, but four other community members told City Press – on condition that they would not be named – that it was “the only way to explain it. They are ritual killings.”

Other residents whom City Press spoke to were as adamant. Some spoke of victims being “skinned” and of organs being removed.

But police have dismissed the murmurs as rumour, and understandably so, given the penchant for vigilantism in South African communities.

“According to the results from the doctor [autopsies], no body parts were removed from the victims,” Naidoo said.

But mistrust of the police runs deep in the community, with one resident telling City Press she was certain the police “bragged too much about finding the killer, then found out it wasn’t him, so they had to kill him”.

There is no evidence to support this claim. Cele publicly stated when he visited the crime scenes that a probe by the Independent Police Investigative Directorate found no signs of foul play related to Khomo’s suicide. Choose a newsletter
Voting Booth
Will the move to alert level 1 change the way you approach your personal and professional life?
Please select an option Oops! Something went wrong, please try again later.
No, already living the ‘new normal’
45% - 56 votes
Yes, I can finally emigrate
20% - 25 votes
Yes, my business can finally thrive
4% - 5 votes
I just wanna do the Jerusalem challenge
6% - 8 votes
No, I am still scared
24% - 30 votes
Previous Results
Podcasts
Should I pay extra into my mortgage with these lower rates?