Mahikeng hospital patients to go without meat ‘until further notice’ Patients at a public hospital in Mahikeng will have to wait “until further notice” before they can have meat with their daily meals “due to non-availability of funds” by the troubled North West health department.

A March 20 memo seen by City Press at Mahikeng’s provincial and Bophelong hospitals, with the latter being a mental institution sharing the same property, explains that meals will only be served with vegetables from March 21.

Department spokesperson, Tebogo Lekgethwane, said that head office was aware of the matter and that an explanation from their finance office indicated that the “inconvenience of meat shortage was largely due to the fact that some of the invoices of the supplier have not been paid on time due to the strike affecting, mainly, the provincial office. The strike has prevented invoices from being processed,” Lekgethwane said.

City Press reported recently that the department was experiencing some financial difficulties, which were explained in a letter to service providers by the chief financial officer on February 9.

The letter to service providers said that the department “apologises for not being able to pay your company for the remainder of this 2017/18 financial year, which ends in March, due to insufficient budget ... your company’s invoices will be paid in April/May.”

While the memo, signed by “acting food services manager KF Monare” this week, cites financial constraints as the source of their meat shortage, Lekgethwane gave a contradicting statement.

“The invoices of food suppliers at hospitals have been prioritised despite the letter that was sent to service providers this year,” he said.

Employees at the provincial office have been on strike because of the scandals that rocked the department, including dubiously awarded contracts. Among those contracts was one awarded to Mediosa; a Gupta-linked company that received a R180-million mobile clinic tender. The company was also paid R30 million several months before it started breaking ground.

Striking employees were calling for the head of department, Dr Thabo Lekalakala, to be suspended after his signature was found on all the questionable transactions. Lekalakala was asked to take leave to allow an investigation, initiated by Premier Supra Mahumapelo, into the matter to be completed.

City Press reported recently that Mediosa paid for Lekalakala, his wife and a “family friend” to go on a trip to India. Lekalakala was supposedly on a mission to see similar services to the one Mediosa was to offer, although the trip came just days after the company was awarded the tender.

The same department has also been accused of using privately owned ambulances while about 40 new ambulances owned by the department were parked in the open in Mahikeng and Rustenburg. 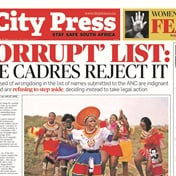