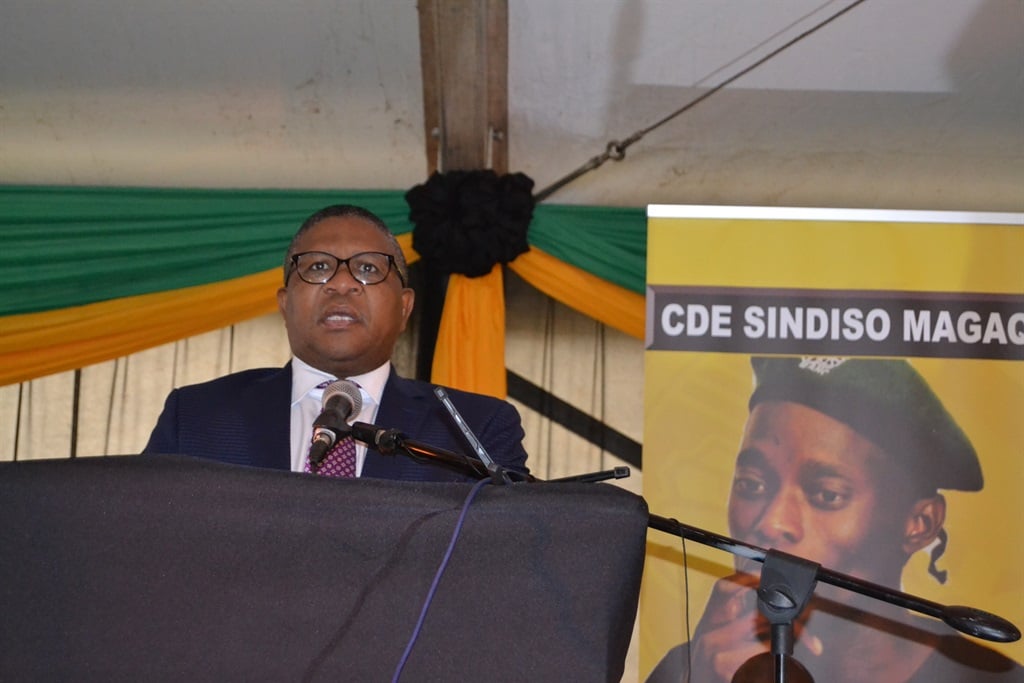 Police minister Fikile Mbalula has vowed to track down the attackers of Sindiso Magaqa.

Police Minister Fikile Mbalula has vowed that the police will hunt down the killers of former ANC Youth League secretary general Sindiso Magaqa, as well as those, that he says, paid for the assassination.

Mbalula was speaking at the memorial service held in Magaqa’s hometown uMzimkhulu, KwaZulu-Natal, on Thursday.

Magaqa was rushed to hospital in July after being shot and wounded in an ambush. He succumbed to his injuries last Monday.

Mbalula likened Magaqa to Chris Hani, saying that he was stubborn with a purpose.

“I dare say Magaqa can be compared alongside giants like Chris Hani. Hani in his political life, he was once tormented and for over 10 years he stayed outside the ANC.”

Magaqa was described as a loyal ANC member who humbled himself and went back to the party’s structures after being suspended in 2012.

Mbalula said he would not rest until Magaqa’s killers were arrested.

Mbalula also used the platform to slate his former colleague and friend Julius Malema, who is now the leader of the Economic Freedom Fighters (EFF).

Malema and the ANCYL’s former spokesperson, Floyd Shivambu, were expelled from the ANC, while Magaqa was suspended from the party.

Mbalula said Magaqa was not supposed to get suspended, but had made the bad decision of associating himself with those who were suspended.

Mbalula said he had warned Magaqa against joining Malema and his suspended colleagues.

Malema said Magaqa had a few harsh words about Mbalula before he died.

“Last time I saw the late Magaqa, he told me that this guy has depoliticised himself into a celebrity. After this shallow tribute, I think now I agree,” he said in a tweet.

Last time I saw the late,he told me that this guy has depoliticized himself into a celebrity.After this shallow tribute,I think now I agree

Ndlozi questioned the sincerity of Mbalula’s concern about Magaqa, asking why he had never done anything to save him.

“Okay, let’s talk, if this pathetic minister cared about Magaqa, why didn’t he save him by giving him a better deployment in his ministry?” Ndlozi asked.

Magaqa will be laid to rest in KwaZulu-Natal on Saturday.

We live in a world where facts and fiction get blurred
In times of uncertainty you need journalism you can trust. For 14 free days, you can have access to a world of in-depth analyses, investigative journalism, top opinions and a range of features. Journalism strengthens democracy. Invest in the future today. Thereafter you will be billed R75 per month. You can cancel anytime and if you cancel within 14 days you won't be billed.
Subscribe to News24
Next on City Press
Northern Cape healthcare emergency is deepening

Listen to our latest podcasts.
Voting Booth
A new report by the Electoral Integrity Project, which looks at the quality of electoral integrity worldwide, has identified South Africa as having the second-highest level of integrity in its elections in Africa. Do you agree with the report?
Please select an option Oops! Something went wrong, please try again later.
No
44% - 57 votes
Yes
28% - 36 votes
We should be first
28% - 36 votes
Previous Results