Meet Rabelani Mamangwa, the farmer who turned land into ‘Eden of Limpopo’

Rabelani Mamangwa has transformed the piece of land she inherited from her grandmother into the “Eden of Limpopo”.

The 32-year-old farmer wanted to be a nurse, but didn’t have the money to study.

“It was my dream to become a nurse until I found my passion in farming. I don’t think I will leave this career; I live, dream and eat farming. I really wish many young black women could see farming as a business and seize the opportunities available in this sector,” she said.

Those who are familiar with Mianzwi village, where Mamangwa grew up and runs her farm, will tell you that the area has arable land, but lacks much-needed resources.

In her quest to get more young people involved in the sector, Mamangwa empowers youngsters in her community with the skills required to succeed.

She does this despite the stumbling blocks that emerging farmers are faced with.

These include a lack of financial support to enable aspiring young black farmers – especially those in the rural areas – to build assets, invest in technology and increase productivity in the sector.

Lack of proper road infrastructure, no access to water and the difficultly of getting equipment, such as tractors, make it difficult for young farmers in remote villages to sustain a career.

Mamangwa is now one of the most recognisable farmers in the area, but when she started farming 15 years ago she never imagined that she would one day become a successful farmer.

And many people she encountered didn’t take her seriously.

“I have always enjoyed farming and considered it a hidden talent. However, I never considered doing it on a full-time basis,” she says.

“When I started people thought I was playing and that I wouldn’t make it. Many of my peers preferred doing office work; I wanted to do the dirty work. Farming is exciting and I always encourage them, especially girls, to take agriculture seriously.

There are many business opportunities in this field, but only for hard workers. The sooner we start realising that money comes from the soil the better
Rabelani Mamangwa

Despite not having any formal agricultural education or funding, Mamangwa has managed to turn her 1.5 hectre inheritance into her livelihood.

She produces cabbages, tobacco and other crops. She supplies local retailers, community members and school feeding schemes in the area.

So far, she employs 10 people on a temporary basis and one person full-time.

Two years ago, Mamangwa was among the winners of the Limpopo department of agriculture and rural development’s Young Aspirant Farmer awards.

Although farming is still a male-dominated field, Mamangwa does not see this as a hindrance, but instead as an opportunity for female farmers to thrive.

She has also taken it upon herself to make farming fashionable and appealing to her peers.

Her biggest challenge, she says, has been convincing young women in the area to take farming seriously.

“Farming is a science and yet most of them think it is for uneducated people. They still believe that a good job entails working in the office, dressing smart and driving big cars.”

Although mindful of the challenges, Mamangwa has big plans for the future, which include expanding her farming business and acquiring more land, which will allow her to plant on a larger scale so she can employ many more people. 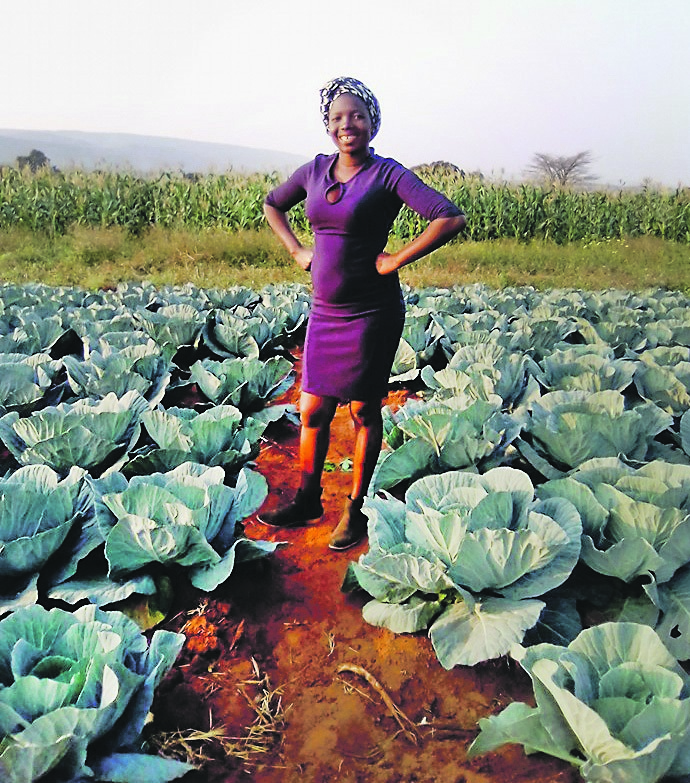 Rabelani Mamangwa and her bumper cabbages, which she grows on her farm in Limpopo

“We don’t have water in the area. We rely on rain and water from the canal. This makes it difficult to work in the winter season. I don’t have money for a borehole. I also need transport to take my vegetables to the bigger markets so that I can make profit to improve our community.”

Related Links
A farmer's 15-year wait for land justice
Retracing Sol Plaatje’s ‘tour of observation’ after Natives Land Act
The 7-year wait for decent homes
Share
Next on City Press
The detective who knew too much: Kinnear was on the brink of exposing corrupt cops

Read more on:
our landfarmingland
ON MY RADAR
for subscribers
On My Radar | Take care as you step into the metaverse