Mogoeng: We have been accusing one another for far too long 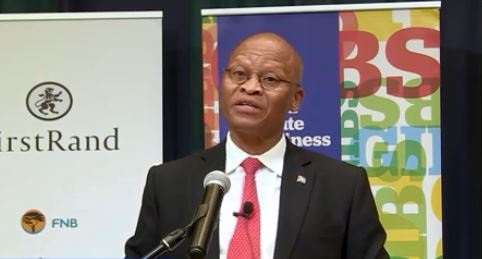 Addressing a recent Gibs Ethics and Governance Think Tank forum, the chief justice argued that a “return to values and principles is the only way to create a real possibility for genuine ethical leadership to be realised and sustained. There is so much more we can achieve if we find one another.”

The director of the think tank, Gideon Pogrund, told the forum the role of the judiciary was so crucial because its purpose was to apply and uphold the law in the face of the misuse and abuse of power.

“Upon this do our hard won rights and freedoms depend, as well as the success and the future of our country.”

A return to fundamental values and principles of morality

The major crises which have engulfed the world, especially South Africa, Africa and rest the developing world were traceable to “the abandonment of values and principles that make for a fulfilled, caring, peaceful, truly loving, compassionate and humble community,” Mogoeng said.

This included the abandonment of values and principles that facilitate the inculcation of ubuntu or the deep-seated resignation to the reality that “every human being or nation deserves respect, dignity, equality and freedom.”

Countries such as Cuba and Singapore had been able to inculcate moral values and principles within the family unit, after which they were taught in schools and became the basis of the civil service and even business.

This meant the countries had structures in place to help guide future leaders, he explained.

Mogoeng said people did not speak out about the departure from morals and degradation of ethical principles in South Africa due to a fear of criticism.

“What then is to be done? We must go back to the basics and teach fundamental values and principles espoused by celebrated leaders like Nelson Mandela, who stood his ground in pursuit of freedom, justice and peaceful co-existence.

“We must instil much-needed values in our homes. Whether you are religious or not, nobody can argue against the need for everybody to be treated with dignity and respect. Let us check our love for money, inculcate values and open our eyes.”

South Africans must take a decision that “we are no longer going to be led by leaders who are unethical. So that never again will our nation be disgraced,” he said.

An ethical leader is a “selfless leader, a servant leader; one who seeks to genuinely realise all the aspirations set out in the preamble of our Constitution”.

An ethical leader cherishes the idea of a democratic and free society in which all persons live together in harmony and with equal opportunities.

“This is an ideal which they strive to achieve on a daily basis and if needs be, an ideal for which they are prepared to die,” he added.

A constitutional obligation to nation building

Although South Africa was a fractured and polarised society, Mogoeng said it is “our constitutional obligation, which we have imposed on ourselves, to heal the divisions of our past.

We have a great country, and the possibility to build it into an economic superpower that can help transform Africa and impact the rest of the world positively is in our hands.

“We have been accusing one another for far too long when we should spend more time reflecting on what it is that brings us together as a people. We must take seriously the preamble to our constitution, which encourages us to recognise the injustices of the past, and states that South Africa belongs to all who live in it, united in our diversity.”

An effort must be made to establish a society based on democratic values: “After the transition to democracy, we never made a systematic effort to confront racism in a constructive way. We must recognise the injustices of the past, wishing it away will never get us anywhere.”

Mogoeng said the country needed a well-structured programme “to allow all of us to work our way through the damage racism has done. We have been faking for too long and something needs to be done to help us all out of this trap. Let us undertake to heal our divisions, not exacerbate them.

Although the country was at present confronted with a number of seemingly insurmountable problems including a lagging economy and the issue of land redistribution, Mogoeng urged people to look for solutions among themselves.

“We don’t see it as our responsibility to look for solutions to the problems that confront us all as a nation. We have left it to others and now we are frustrated. We became a constitutional democracy through fair, just, equitable and principled compromise. We must find an acceptable solution if we want to avoid a conflagration looming on the horizon.”

However, he added that constitutional or legislative amendments are not necessary to bring about much-needed change: “The spirit of generosity and care for others does not require legislation.”

Related Links
Stokvels: How informal mechanisms create wealth and access to credit
Education and youth employment: A priority for all South Africans
The corporation is powerful. We need to re-evaluate its role in society
Share
Next on City Press
School screeners not paid as education department and public works pass the buck