The casket of former president Robert Mugabe is carried by the presidential guard to an air force helicopter for transport to the stadium. Picture: Ben Curtis / AP

Despite weeks of controversy and confusion regarding the burial of former Zimbabwean president Robert Mugabe, the decision was finally taken to bury him at his rural village at Kutama in Zvimba district.

This despite reports that an agreement was reached to have him buried at the National Heroes Acre monument in Harare once a mausoleum was completed.

His nephew Leo Mugabe told City Press that there was no stand-off between the governing Zanu-PF and the family, it was up to them [the family] to decide on the matter and respect the former president’s dying wishes.

“There was no compromise, the family dictates what will happen. Zvimba is where the [former] president wanted to be buried. The place next to his mother is full but we managed to find another space,” he said.

Mugabe, who came to power in 1980 and ruled Zimbabwe uninterrupted for more than 37 years, died of prostate cancer, according to President Emmerson Mnangagwa. He will be buried on Saturday night in a private ceremony which will be attended by family and close friends.

For the last few weeks the debate has been whether he should be laid to rest at the Heroes Acre or his rural home, with the Zanu-PF preferring the latter.

On Thursday it was reported that Mnangagwa gave the go-ahead for Mugabe’s body to be moved from his Harare mansion to his rural home.

Leo Mugabe said the family has not allowed any external factors to meddle in its affairs: “We decided to follow his wish, as a family we do not listen to any of those, Zanu-PF, MDC or anyone else,” he said.

But he said the family would accept any assistance – financial and otherwise – from government for the funeral. “What we are doing is our own programme, if they [Zimbabwean government] want to assist, they can [do so] without any conditions. If we need anything, we will let them know,” he said.

Since Mugabe died on September 6, several African countries have held memorial services to celebrate his contribution to Zimbabwe’s liberation. 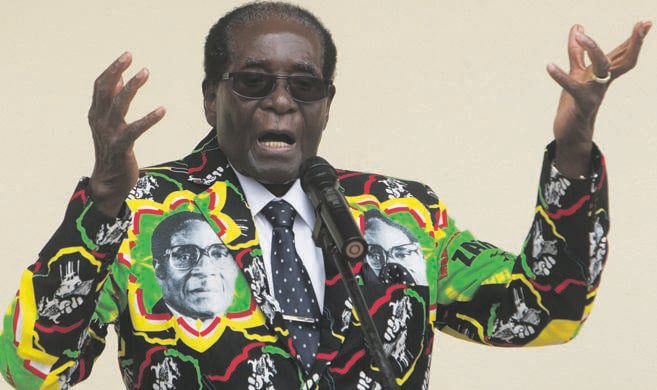 Leo Mugabe has expressed his gratitude for all the organisations and governments that have honoured his uncle.

“We appreciate everything the EFF and the ANC did. We continue to appreciate other memorial services held throughout Africa,” he said.

Just days after the news of Mugabe’s passing, the EFF was the first political party in South Africa to hold a memorial service to honour the fallen statesman. The service was held in Orlando, with guests including Patrick Zhuwao – a former minister and Mugabe’s nephew – and former minister of local government and former rural development and national housing, Saviour Kasukuwere.

Zhuwao and Kasukuwere were part of the G40 faction of the late leader’s administration, whose figurehead was former first lady Grace Mugabe.

Read: ‘Mugabe was tormented in his final days’

They fled Zimbabwe after the military coup in 2017 and have not been permitted to attend the funeral.

The ANC held two services, both held in KwaZulu-Natal. At the first memorial, former president Thabo Mbeki delivered a keynote speech and while the other one was addressed by President Cyril Ramaphosa.

He will be buried on Saturday night in a private ceremony which will be attended by family and close friends.

Ramaphosa also spoke at a funeral service in Harare last week, where he was jeered by Zimbabweans in attendance, in reaction to the latest spate of xenophobic violence against foreign nationals in South Africa.

We live in a world where facts and fiction get blurred
In times of uncertainty you need journalism you can trust. For only R75 per month, you have access to a world of in-depth analyses, investigative journalism, top opinions and a range of features. Journalism strengthens democracy. Invest in the future today.
Subscribe to News24
Related Links
SA must implement stricter immigration laws
Mugabe’s nephew: My uncle only spent 5 days in Singapore hospital
Zimbabweans divided on Mugabe legacy
Next on City Press
The Rustenburg blame game: Residents complain of poor service delivery, mayor blames community

Sign-up to our newsletters and get the latest results and info in your inbox.
Voting Booth
President Cyril Ramaphosa has praised outgoing Chief Justice Mogoeng Mogoeng for his outstanding leadership and service. Do you agree?
Please select an option Oops! Something went wrong, please try again later.
He served well.
63% - 93 votes
He was too controversial
37% - 55 votes
Previous Results
The best of 2020
Can you guess who featured in our most popular articles from 2020?