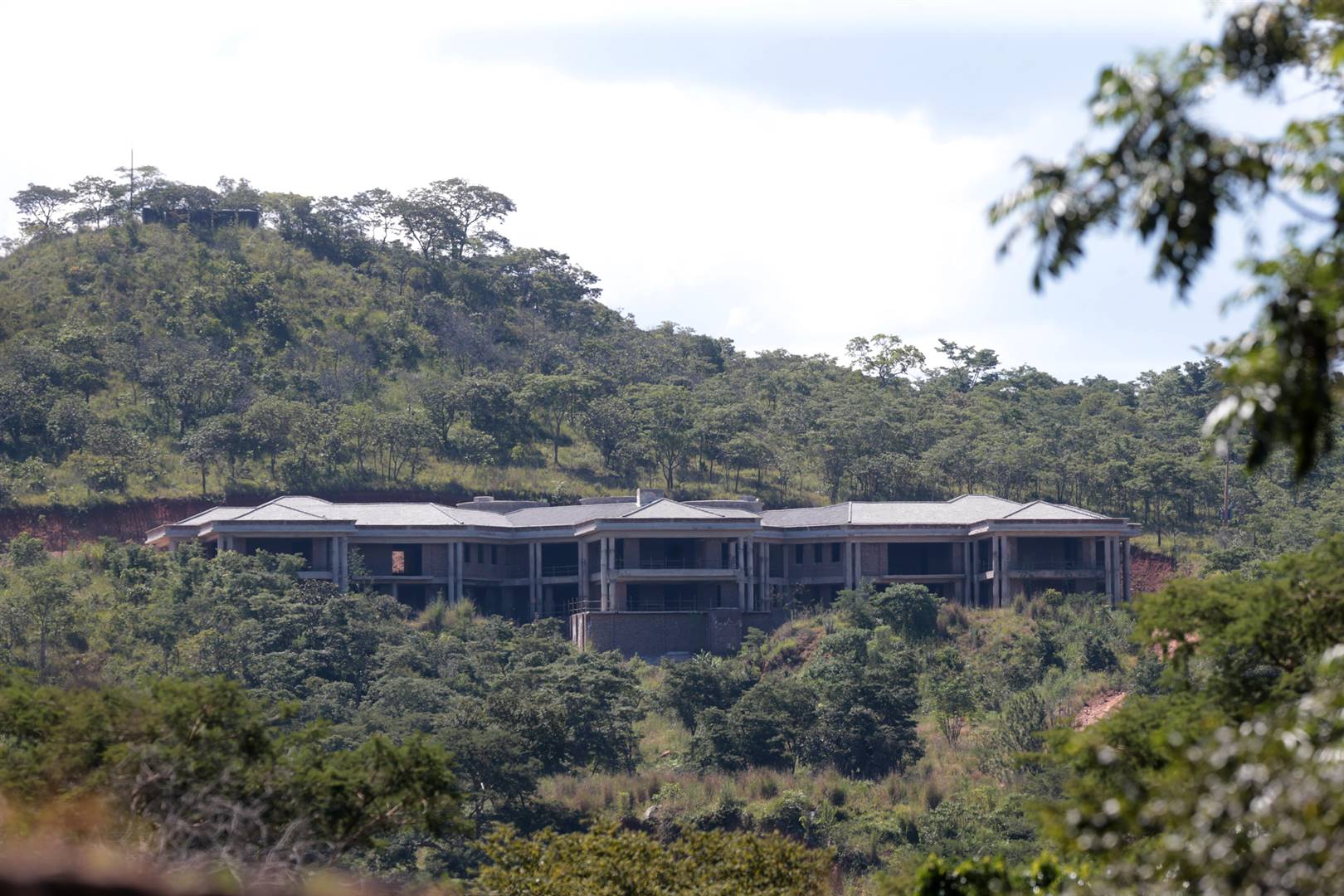 The mansion which Simba Chikore and his wife, Bona, are building. Pictures: Supplied

Nestled on a mountain in the exclusive Umwinsidale suburb on the outskirts of Harare’s north-eastern periphery, the mansion is immersed in scenic surroundings and there seems to be a seamless connection between its interior design and the environs.

The woodland prevents the onlooker from taking in a direct view of the house, which stands on the steep slopes of the mountain as if the lush environment has embraced the mansion.

The architectural theme suggests that the property was specially designed with a spirit of adventure and the wow factor in a locality overlooking the suburb on the edge of the equally picturesque Carrick Creagh neighbourhood in Borrowdale.

The house also overlooks Glen Lorne and other nearby suburbs across the rugged terrain, as well as the farms dotted around the rolling outer reaches of the city. Down the foot of the mountain, sizeable structures are taking shape, notably Venue Umwinzii, a big wedding arena.

Apart from Carrick Creagh Road, the wedding venue and the massive house are also accessible through Umwinsidale Road and Luna Road, which meet from opposite directions.

Besides the backdrop of leafy indigenous trees, through which the Umwinsi River flows majestically, the spacious wedding venue – which constitutes the lower boundaries of the house – adds to the aesthetic splendour with its vast lush-green gardens. Nestled on a mountain in the exclusive Umwinsidale suburb on the outskirts of Harare’s north-eastern periphery, the mansion is said to have been funded by Mugabe before his death.

This is the mansion which late former Zimbabwean president Robert Mugabe’s son-in-law Simba Chikore, a pilot, and his wife Bona, an accountant, are building.

An investigation by The NewsHawks into the property development shows that the construction of the 25-room house is estimated to cost at least $20 million (R295 million). It was originally expected to cost $39 million, before Mugabe’s death gave Simba and Bona a financial reality check.

The imposing mansion sits on a 22-hectare tract of land that cascades down the mountain right to the foot of the Umwinsi River valley. To put it into perspective, the house is built on land that is bigger than the Harare Gardens, which sit on 21 hectares.

The owners of the property are now struggling to finish the house, which at the beginning was supposed to cost $39 million
Source

In the basement are nine rooms, including an apartment, while the ground floor has eight rooms and the first floor has another eight. The sun deck offers a stunning view of the mountains and surrounding areas.

Checks with architects and quantity surveyors in Harare showed that, given the steep slopes of the mountain where the house is built, the cost of construction is about $2 500 per square metre. This means that with a built-up area of 7 800m2, the house – which is half-completed – will cost $19.5 million.

That is before factoring in expensive finishings, key features such as a big swimming pool and landscaping of the sprawling grounds.

When all these additional features are factored in, the house will cost well over $20 million, according to conservative estimates.

“At the moment the total cost of the house is expected to be at least $20 million. This is because the owners of the property are now struggling to finish the house, which at the beginning was supposed to cost $39 million,” said a source at the Mugabes’ Blue Roof family home in Borrowdale, Harare.

“The late former president was financing the project. Remember, he gave Bona and Simba his historic Mount Pleasant house during their wedding, but after that they asked him to build a house of their choice and dreams. Mugabe said he would fund the project. He paid for everything before he died. Simba and Bona are now struggling to complete it. It’s a huge project; they need millions of US dollars to finish it.”

“The price would have been much higher if they still had money. In an elevated mountain area like that it might have cost up to $5 000 per square metre to build, but that has now been contained at $2 500 per square metre,” another source said.

“So when you add land, construction, design and landscaping costs, at a minimum square metre charge of $2 500 it becomes $20 million, but if you take a maximalist approach it will be $39 million. This includes the cost of paying the whole project team, the architect, structural engineer, civil engineer, mechanical engineer and electrical engineer. These days there is also the environmental engineer. While professional architects usually charge 7% of the project cost, the engineers charge 3.5%. These are the professional rates, but people always negotiate.”

“Besides all that, there will also be a road which will stretch for a kilometre inside the property, given its magnitude, and that will cost up to $1.5 million on its own. Building a kilometre of a proper tarred road costs between $1 million and $1.2 million.”

When Simba wed Bona in 2014, Mugabe gave them his house at 40 Quorn Avenue in Mount Pleasant, Harare, where he first stayed when he became prime minister in 1980 after leaving his Highfield home.

From there, Mugabe stayed at Zimbabwe House and then went to the Blue Roof residence, which was registered in the name of a company linked to the governing Zanu PF, which donated the stand to him. Mugabe was also gifted the Mount Pleasant house.

While it is not clear how much the former president was worth at the time of his death in September 2019, his account at CBZ Bank held $10 million which was part of his estate.

Mugabe’s family, children and relatives did not make much money during his rule, hence most of them are struggling at the moment. He, however, allowed his family members to grab farms and his cronies to loot and accumulate wealth. His wife, Grace, is more monied than the rest of the family.

As reported by The NewsHawks last October, according to documents, Mugabe’s family accumulated 24 farms, not 14 as widely reported.

We live in a world where facts and fiction get blurred
In times of uncertainty you need journalism you can trust. For only R75 per month, you have access to a world of in-depth analyses, investigative journalism, top opinions and a range of features. Journalism strengthens democracy. Invest in the future today.
Subscribe to News24
Next on City Press
In Focus: What the Charlotte Maxeke fire tells us about health and safety in Gauteng hospitals

Choose a newsletter
Voting Booth
ANC secretary-general Ace Magashule has written a letter suspending party president Cyril Ramaphosa in apparent retaliation after he was served with a letter of suspension on Wednesday.
Please select an option Oops! Something went wrong, please try again later.
He doesn't have the power
35% - 92 votes
It’s a declaration of war
23% - 61 votes
Nothing but a distraction
41% - 108 votes
Previous Results
The best of 2020
Can you guess who featured in our most popular articles from 2020?