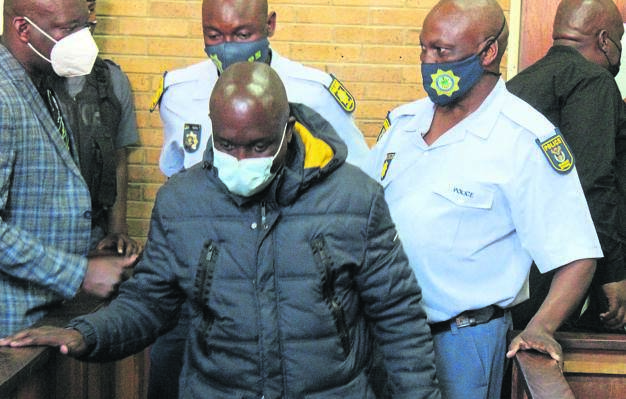 Former Mpumalanga agriculture, rural development, land and environmental affairs MEC Mandla Msibi has hinted at a political plot by his cabinet colleagues to frame him for the murder and attempted murders he is facing charges for.

Msibi and his co-accused – Joseph Charlie Ngwenya (35) and Tshepo Matsane (30) – were released on bail of R20 000 each by Magistrate Suzan Monaledi in the Nelspruit Magistrates’ Court on Tuesday.

The trio has been accused of fatally shooting two people – Sindela Sipho Lubisi and Dingane Ngwenya – and injuring Sfiso Mpila on August 22 outside Coyote’s Shisa Nyama in Nelspruit.

It is alleged that people driving in a blue double-cab bakkie opened fire on a VW Polo and killed two men. On that day, the ANC had a provincial list conference at Nutting House and Msibi allegedly went to Coyote’s to collect meat.

The fourth MEC complained to the premier that I was running her department. How so?
Mandla Msibi

Flanked by acting Mpumalanga ANC secretary Lindiwe Ntshalintshali, Msibi told the crowd gathered outside the court following his release that he would request a meeting with ANC national officials to spill the beans about events that had preceded his arrest and abuse of state power.

Msibi claimed that his life had been “tested”, accusing four unnamed MECs – three women and one man – of having monitored his whereabouts, spread the information that he had shot the people and questioned him about the provincial list conference.

He alleged the office of Premier Refilwe Mtshweni-Tsipane was also involved, as a VIP officer had phoned his bodyguard, asking about his whereabouts.

“The fourth MEC complained to the premier that I was running her department. How so?” Msibi said.

Msibi said a rumour about his arrest had started circulating long before he had handed himself over to the police on October 11, and that he had been handcuffed for four hours in spite of his own hand over.

“Facebook groups were writing that I had been arrested even before I met the investigating officer when I handed myself over. When I was campaigning, people were asking me about the arrest,” he said.

The former MEC also said that he had received information that the plan had been to assassinate him if he tried to flee from the police. “The police even told me that if I ran they would shoot and kill me,” he said.

Msibi said that their release on bail was delayed because they had sores from being handcuffed. He said that he had fallen sick in the police cells and had collapsed due to high blood pressure.

“There was no bomb threat. It was a cash threat because things were not going according to plan,” Msibi said, insinuating that court officials might have been bribed.

About the day of the shooting, Msibi said that he went to Coyote’s after a senior ANC member, former communications minister Dina Pule, had requested him to buy them food as they were tired of eating the food at the lodge.

He said that, as he had driven out, police at Nutting House told him that there had been a shooting involving people from ward 45 in Barberton. Msibi then asked “volunteers” to accompany him.

“Coyote’s was closing when I arrived but they let me in. When shooting started outside, I was rushed to a safe room. I then phoned Brigadier Ngobeni at Nelspruit police station, informing him about the shooting. Cameras are there and clear,” he said.

Msibi said he unconditionally accepted the ANC provincial executive committee’s decision that he should step aside and that Mtshweni-Tsipane had fired him.

“He must say who gave him my number to call and threaten me. The investigating officer must be a police officer and get out of ANC affairs,” Ntshalintshali said.