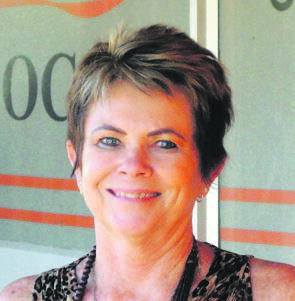 Sheron Steyn outside their offices after an exclusive interview

While political parties are upbeat and lobbying for votes ahead of the May provincial and national elections, the Northern Cape business community is despondent.

“There are no tangible investments and businesses are closing shop.”

She said what was needed was fixed rates and taxes for investors in the province.

Community service delivery protests had hit businesses hard because the provincial government had not provided contingency plans and security for businesses.

Steyn said the Northern Cape was not so much a tourist attraction but rather a “historical destination”.

She wanted industries and factories to replace the empty veld along the province’s roads, saying the vast distance could be connected if dams, factories and substations were built.

Steyn said the province was home to the beautiful Namaqua flowers, the Augrabies Falls, the three-day Maloof skateboarding competition in Kimberley and the Magersfontein Bloodhound Super Sonic Car route, which was internationally renowned for testing new high-speed vehicles.

Steyn said the province’s true potential and capacity was hindered by the provincial government’s “lack of communication and poor management skills”.

She said water supply was switched off at 8pm in Kimberley because of the lack of proper infrastructure.

Steyn proposed that the government should employ a water purifier called the “blue job system” to turn the tide on filthy water in Kimberley, where the council got its water from the Newton Reservoir.

“Instead of bringing the Chinese to hand over food parcels, the government must get their house in order through meaningful investments to help create jobs.”

Meanwhile, the Frances Baard Business Forum was at its wits’ end about the construction of the new Sol Plaatje University, which was established in 2014.

Local and emerging contractors accused the government of overlooking them in favour of “outsiders”.

Sheldon Bojosi, from the forum, pointed out that local businesses were not benefiting from the R350 million which was set aside to complete the construction of the university in Kimberley.

“We are in the process of petitioning the education department as those at the helm of the university are outsiders and look out for those that they know from wherever they come.”

However, a local project manager, who wanted to remain anonymous for fear of reprisals, told City Press that Moroka House, a student residence, was collapsing because of poor workmanship by outside contractors.

The university’s director of planning and infrastructure, Christine-Ann Paddon pointed out that the university had developed relationships with nine local subcontractors

“These are black and female subcontractors from around Ritchie [a town just outside Kimberley].”

She said there were guidelines set out by the government which had to be followed.

“In our view local contractors see the potential to do business but they often do not meet the requirements,” she said.

Choose a newsletter
Voting Booth
How do you feel about reports that South Africa made generous donations of “medical material supplies” worth tens of millions of rands to the Cuban government?
Please select an option Oops! Something went wrong, please try again later.
SA should come first
84% - 422 votes
Gesture of good faith
8% - 38 votes
SA has Cuba's doctors
9% - 43 votes
Previous Results
Podcasts
Podcast | How to track your financial progress