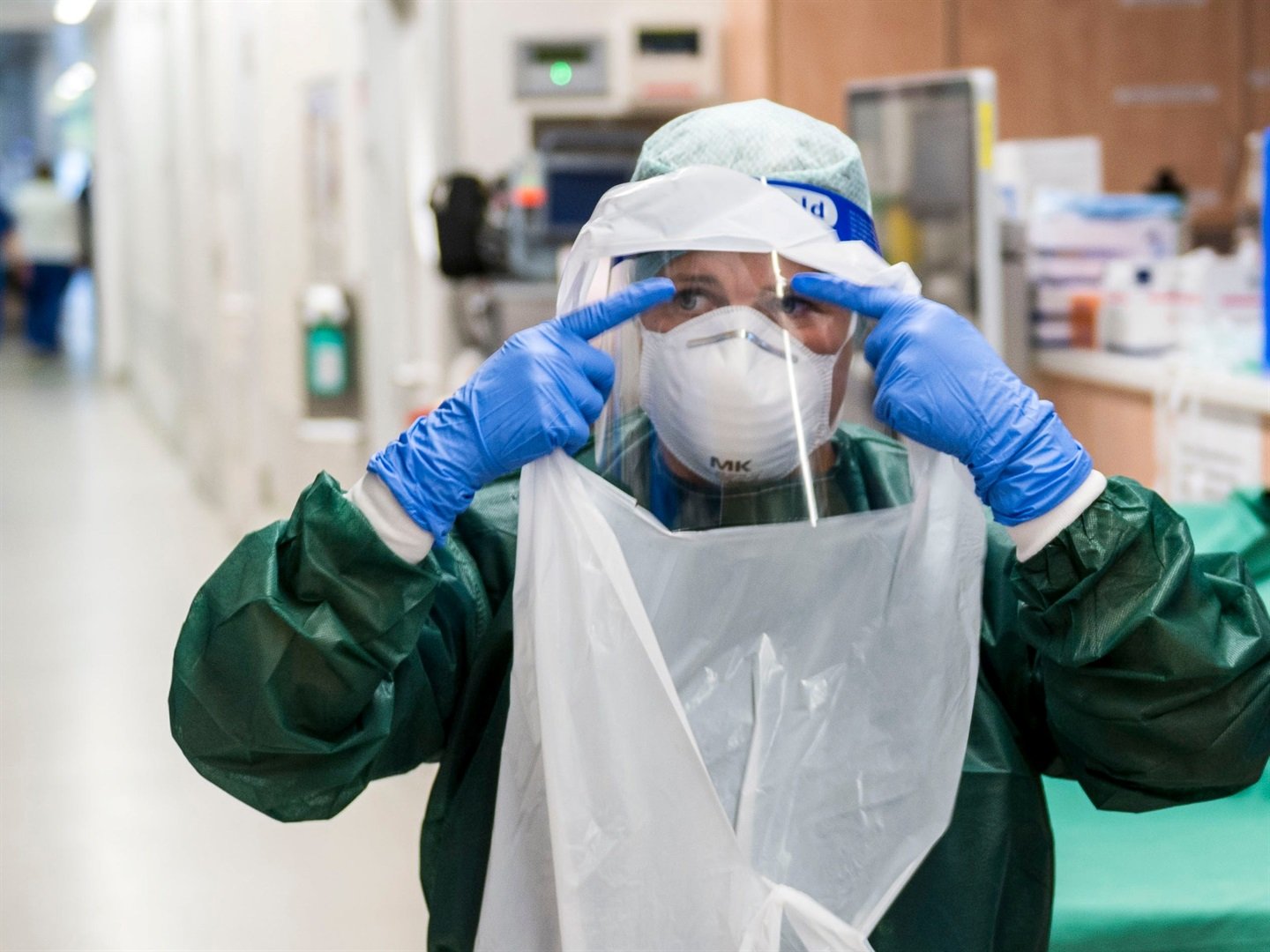 Dr Dion Theys and Daniel Gaborone have been charged with fraud and corruption based on the issuing of a personal protective equipment (PPE) tender last year, valued at R43 million, without following the correct procurement procedures. Photo: Thomas Lohnes/Getty Images.

The Northern Cape provincial government is still deciding whether or not to act against two of the province’s top health officials who this week appeared in court on charges of fraud and corruption. Opposition parties and trade unions are calling for the officials to be suspended.

The fate of two of the Northern Cape health department’s top officials, who were arrested for fraud and corruption, remains uncertain despite calls from some opposition parties and trade unions to suspend them immediately.

Acting head of the department Dr Dion Theys and the department’s chief financial officer, Daniel Gaborone, appeared in the Kimberley Magistrates’ Court this week. The charges relate to allegations around the issuing of a personal protective equipment (PPE) tender last year, valued at R43 million, without following the correct procurement procedures.

Northern Cape department of health spokesperson Lebogang Majaha said the department was still managing the internal process on the way forward before it decided on Theys’ and Gaborone’s futures in the department. “We will share communication as soon as we have come to a conclusion regarding this matter,” Majaha told Spotlight.

What we do know is that these two officials are not new to corruption in the department, and that is why we are calling for their immediate suspension.
DA spokesperson, Izak Fritz

Among other requirements, the act provides for certain steps that public officials must follow in managing public finances in national and provincial departments. It aims to secure transparency, accountability and sound financial management in government and public institutions.

Mnisi said a thorough probe by the Hawks’ serious corruption investigation team led to the arrests. The accused were granted bail of R20 000 each and will appear in court again on September 27.

Some opposition parties and trade unions are calling for the immediate suspension of Theys and Gaborone.

Spokesperson for the DA in the Northern Cape Isak Fritz told Spotlight they did not yet have information on the companies implicated in this matter. “But what we do know is that these two officials are not new to corruption in the department, and that is why we are calling for their immediate suspension.”

Theys was arrested and appeared in court in March this year on a different charge relating to lease agreements concluded in 2014 for nursing students’ accommodation to the value of R96 million. Theys was granted bail of R30 000 at the time.

“This is not even a matter to be discussed anymore,” says Fritz. “Theys is being arrested by the Hawks for the second time in less than six months and we cannot accept that, so this matter has to be taken very [seriously].”

It cannot be correct that Theys continues to hold his senior position as a provincial medical manager, even after he has been implicated in tender corruption.
Nehawu regional secretary Meleme Moleme

According to Fritz, Gaborone is also not new to controversy. “He was previously implicated in a case where he procured water purifiers and oxygen machines for the department of health facilities in the province at inflated prices, in return for [a] kickback in 2018.”

Attempts to get comment from Theys and Gaborone were unsuccessful.

Fritz insists that the health department must take full responsibility for wrongdoing by instituting its own internal disciplinary proceedings and remove any further risk posed to the institution by individuals such as Theys and Gaborone. “Now that Theys and Gaborone are implicated in yet another case, we cannot accept that either of them continues to operate from positions of influence within the department of health.”

EFF provincial leader Aubrey Baartman says the EFF is not surprised by the arrests. “We have been expecting it, so it is highly welcomed. As the EFF, we are still expecting more arrests in the province, so we are urging all the corrupt officials to come clean.”

The Freedom Front Plus deputy chair in the province, Daniel Coetzee, also welcomed the arrest. “The investigation has been ongoing for a while now, so we are glad.” He added that it was ultimately the most vulnerable people who suffered because of mismanagement.

According to Nehawu regional secretary Moleme Moleme, the union asked the department several times to suspend Theys. “It has been our plea [to] the department since his first arrest that took place earlier this year. We have been saying that it cannot be correct that Theys continues to hold his senior position as a provincial medical manager, even after he has been implicated in tender corruption. Instead, we have noted that, after his March arrest, he was never held responsible for his actions but was rather given back his senior management position. All of us are public servants and we must be held accountable for our wrong actions. All corrupt officials must be suspended.”

In May, Northern Cape premier Dr Zamani Saul had to account to MPs in Parliament’s portfolio committee on public service and administration on the head of department vacancy in health and three other departments. Saul then acknowledged to MPs that the province “could have done much better in filling the vacancies”. He said the province had already advertised the positions in August last year.

According to the Public Service Act, however, these vacant posts must be filled within six months and someone cannot be acting for more than a year.

Saul acknowledged that having people in an acting position is not ideal but the acting heads of department (Theys included) had the skills and competence required for the job and this “created and added value” to the departments in the interim. He undertook to submit a report at the end of this month to the committee to show the progress they had made in filling the vacancies.

When some MPs raised concerns over the operation of the health department without a permanent head of department at such a crucial time, Saul said those “appointed in acting positions in the province were qualified for these positions and were quite seasoned bureaucrats who were really assisting the department to hold the fort”. According to him, there were no visible signs of instability and poor performance due to the people who were acting.

This was about two months after Theys’ first arrest.

Attempts to find out if the position has since been filled and what, if any, action was taken against Theys, sent Spotlight down a rabbit hole, with one official saying Theys was still the acting head of department, and opposition parties saying they understood he had been redeployed to his former position of provincial medical manager. If this is the case, it is not clear when it happened.

Saul also dodged this question in Parliament. Spotlight understands another head of department, Riaan Strydom, has been appointed, but, on the department’s social media pages, Strydom is referred to as acting head of department. The last permanent head of the provincial health department was Theys’ predecessor, Dr Steven Jonkers, also no stranger to controversy. He was reportedly implicated in fraud and corruption at the department of transport, safety and liaison a few years ago.

The heads of department are the accounting officers responsible for the administration of the department. During Theys’ time in office, the Auditor-General flagged various irregularities with PPE in her first and second special reports on Covid-19 spending.

The report notes that, among other things, the provincial health department deviated from the emergency procurement procedures for “one transaction to procure goods to the value of R8.04 million in the Northern Cape”. The Auditor-General said they could not find “any evidence that the deviations had been approved by the accounting officer”.

The report found that the department had failed to ensure adequate quality of PPE on receipt. This meant that some PPE items received did not meet the minimum required standards – putting healthcare workers at risk.

“Also in the Northern Cape, the accounting officer had signed a generic deviation on March 24 2020 that did not specify any time period and was not considered per specific transaction, as required. The deviation, therefore, did not justify the matter of emergency for the four suppliers to the value of R60.73 million.”

It was found the department awarded a contract to a supplier who “was not a bona fide PPE supplier, and its CIPC (Companies and Intellectual Property Commission) returns were not up to date. The award had been granted to a supplier who had been in the process of being deregistered with the CIPC. All of this is required by the Public Finance Management Act and Treasury regulations.

Another red flag the Auditor-General highlighted was the poor storage of PPE in the Northern Cape and a few other provinces. The report found that the department had failed to ensure adequate quality of PPE on receipt. This meant that some PPE items received did not meet the minimum required standards – putting healthcare workers at risk. Among the complaints some healthcare workers raised with the Auditor-General are “coveralls and overshoes [that] were made of poor quality material, as it fell apart when putting them on”; “some masks did not have nose bars and the ear loops detached easily”; and “some isolation gowns/aprons were too short, tore easily or had a bad odour”.

The Auditor-General noted that the province subsequently undertook to establish a quality control committee to evaluate the quality of PPE before orders were placed and to create a formal PPE complaints process.

As accounting officer, Theys also undertook to train and “allocate staff with the requisite knowledge of stock management practices and skills to manage the PPE stock stored in the temporary bulk storage facilities”.

Sign-up to our newsletters and get the latest results and info in your inbox.
Voting Booth
President Cyril Ramaphosa has announced that SA’s vaccine passport plans are coming on. What are your thoughts?
Please select an option Oops! Something went wrong, please try again later.
We cannot be forced
29% - 30 votes
It’s critical
22% - 23 votes
Vaccines save lives
49% - 50 votes
Previous Results
The best of 2020
Can you guess who featured in our most popular articles from 2020?