#NotInMyName – Ramakgopa calls for calm amid violence in Tshwane 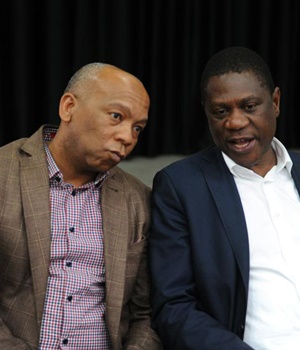 Kgosientso Ramokgopa backs Thoko Didiza for the Tshwane mayoral post. With him is ANC Gauteng chair Paul Mashatile during the community meeting that was held at Atteridgeville community hall. Picture: Lucky Nxumalo
The protesting community of Atteridgeville in Pretoria have accused the ANC of imposing former minister Thoko Didiza as their mayoral candidate over their preferred one, current mayor Kgosientso Sputla Ramokgopa.
Not even Ramokgopa could persuade his supporters to accept the ANC’s decision to allow Didiza to take the helm of the municipality of the capital city.
Several groups arrived the local community hall, where Ramokgopa addressed them, singing pro-Ramokgopa songs and chanting “Sputla or nothing” as well as “we won’t allow Didiza to take away our Sputla in our presence”.

ANC Gauteng ANC chairperson Paul Mashatile was booed when introduced to a community at a local hall in volatile Atteridgeville earlier.

Parts of Tshwane experienced fiery protests which left more than 20 buses and several trucks torched in Mamelodi and Soshanguve. The protests started after the ANC announced Didiza as its mayoral candidate for Tshwane.

MT @polokotau: #TshwaneUnrest Paul Mashatile keeping calm after he was booed when introduced to community at Atteridgeville hall earlier

Atteridgeville remained on the edge since last night. Roads were blockaded, tyres burnt and there was looting – all of which continued this morning with two buses and a truck going up in flames.
This prompted Ramokgopa to take to social media in a bid to urge his supporters to calm down under #NotInMyName.
He reiterated this in a community meeting earlier today, urging party members to respect and support the ANC’s decisions.
However, they responded fiercely, saying the ANC had made decisions on behalf of its local branches and had imposed Didiza on them.

They also refused to allow taxis to operate, shops to open and situation in the area to normalise, and vowed to continue with their protest until the ANC agreed to have Ramokgopa as mayoral candidate.

Ramokgopa was also widely opposed when he urged them to allow normality while the ANC engaged its branches from tomorrow in a bid to resolve their issues.
They raised their voices in disagreement when he said everything would only be possible if the ANC was “in power after August 3” elections.
The ANC decided to bring in Didiza as a compromise candidate over Ramokgopa and his deputy, Mapiti Matsena. The two have been blamed for leading factional groups which were divided on who should lead the capital city municipality.
The party called “for calm and discipline” yesterday. It said it would report to its branches on this decision and for them to rally behind the resolution.
“The robust nature of our candidate selection process provides an opportunity for members of our organisation to voice their displeasure. Once decisions are taken it is ultimately incumbent on all our members to close ranks, and in this case support and rally behind Comrade Thoko Didiza and all our councillor candidates,” the ANC said.
There were no indications on whether the protests would continue when the community left the hall singing pro-Ramokgopa songs.
The police presence remained heavy in the area where foreign-owned shops and shopping centres continued to be looted throughout the day.
» Tell us what you think: Leave your comment on our Facebook page or on Twitter @City_Press
We live in a world where facts and fiction get blurred
In times of uncertainty you need journalism you can trust. For 14 free days, you can have access to a world of in-depth analyses, investigative journalism, top opinions and a range of features. Journalism strengthens democracy. Invest in the future today. Thereafter you will be billed R75 per month. You can cancel anytime and if you cancel within 14 days you won't be billed.
Subscribe to News24
Related Links
Chaos in Atteridgeville as protests over mayoral candidate Didiza continue
Protests flare up over Tshwane mayoral candidate, 3 officers injured
From minister to mayor: ANC earmarks ‘experienced’ Thoko Didiza for Tshwane
Next on City Press
Northern Cape healthcare emergency is deepening

Listen to our latest podcasts.
Voting Booth
A new report by the Electoral Integrity Project, which looks at the quality of electoral integrity worldwide, has identified South Africa as having the second-highest level of integrity in its elections in Africa. Do you agree with the report?
Please select an option Oops! Something went wrong, please try again later.
No
45% - 59 votes
Yes
28% - 37 votes
We should be first
27% - 36 votes
Previous Results