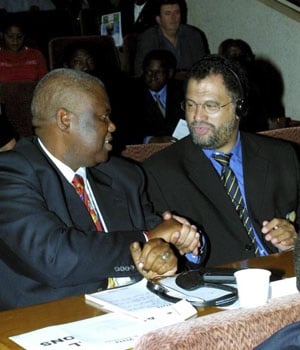 Then Safa president Molefi Oliphant (left) is congratulated by then Safa CEO Danny Jordaan after Oliphant was elected to the CAF executive during the organisation’s congress in Bamako, Mali, in 2002. Picture: Gavin Barker/Gallo images

Oliphant, who was the president of South Africa’s soccer governing body when the nation won the rights to host the 2010 World Cup, this week accused Jordaan of betraying him.

He said he was “shocked and felt betrayed” after realising Jordaan had failed to disclose the existence of a 2007 letter Jordaan had written to Fifa requesting that payments be made to the Confederation of North, Central America and Caribbean Association Football (Concacaf).

Oliphant said Jordaan, who had been CEO of the local organising committee (LOC) of the 2010 tournament, had told him nothing about the letter when they discussed the matter at a meeting last Sunday in a hotel near OR Tambo International Airport. At the time, only a letter bearing Oliphant’s name and signature was in the public domain, fuelling speculation that he was the person behind the alleged bribe to Concacaf.

The $10 million payment, ostensibly for the development of soccer in the African diaspora, but which mostly ended up in the pockets of then Concacaf boss Jack Warner, is alleged by the FBI as having been a bribe to secure votes for the 2010 World Cup.

“I was shocked, disappointed, saddened and felt betrayed because there was no disclosure,” said Oliphant, referring to the letter Jordaan wrote to Fifa on December 10 2007. At the time of the meeting, only the letter signed by Oliphant in March 2008 had leaked to the media. In the letter, Oliphant requested Fifa to direct part of the future operating budget of South Africa’s local organising committee to Warner’s federation.

Days later, Jordaan’s earlier letter, written in December, was leaked – carrying requests to Fifa that were similar to those contained in the letter Oliphant signed four months later.

“We met twice on Saturday and Sunday discussing this letter [the one I signed] and there was no disclosure from [Jordaan] that a letter was written on December 10 2007. And if you look at both of them, their contents are the same, including the language used, and this simply means they were written by the same person. I signed it because it was given to me by the person I have worked with for more than two decades. It is all about disclosure,” Oliphant said.

He further said: “What is surprising is, after I signed the letter on March 4 2008, I found out on December 10 2007 that the CEO of the LOC wrote a letter that Fifa should deduct $10 million from a future LOC operational budget that deals directly with the diaspora project. I was shocked to see that letter – a copy of which I have. I can confidently say this letter was drafted by him for me to sign, because the language is the same. I did it in good faith, having confidence and trust in the CEO.”

“Regardless of the statement, it does not change the fact that the African diaspora programme was a genuine and legitimate programme, as the minister of sport, Fikile Mbalula, stated this week. We reject with the contempt it deserves any assertion to the contrary. Anyone who says anything to the contrary – those matters will be dealt with in the association structures.”

What the emergence of Jordaan’s December 2007 letter indicates is that Fifa made two payments to the African diaspora programme after receiving the requests. Those were made on January 2 2008 ($616 000) and January 28 ($1.6 million). Fifa made the final payment of $7.7 million three days after Oliphant’s March 2008 letter.

In the letter, Jordaan also said that then deputy finance minister Jabu Moleketi had recommended the money for the Diaspora Legacy Project be paid over to Fifa. He also said he had spoken to then foreign affairs minister and current African Union commission chairperson Dr Nkosazana Dlamini-Zuma, who had wanted the funds to rather be paid to the LOC.

Before Jordaan’s letter became public, Moleketi, who chaired the LOC’s finance committee, said the LOC was only constituted after the bidding process and was “unaware of anything that had happened that could tarnish the image of the World Cup”.

“But once institutions like the US justice department start an investigation it would be important for South Africa to say nothing untoward happened and we welcome any investigation that seeks to deal with any form of corruption,” he said.

But yesterday, when called about the letter from Jordaan, Moleketi said: “If you’re going to ask about the Fifa stuff, I will refer you to Minister Mbalula’s office. Thank you.”

Jordaan’s letter has brought into question what government really knows about the alleged bribe paid to the Carribbeans.

Former president Thabo Mbeki has said: “The government that I had the privilege to lead would never have paid any bribe, even if it were solicited.”

Former deputy foreign minister Sue van der Merwe, who formed part of the LOC, said: “I am completely unaware of anything that took place in the bidding process led by Jordaan and chairperson Irvin Khoza. As the LOC, we simply worked together to make the World Cup happen once it had been awarded to us. I think the arrests and allegations of bribery are absolutely tragic because soccer is such a global sport and it’s important to so many nations. It was a shining moment for the country and we did our best.”

This latest twist comes in a week during which it also emerged that the bid for the 2006 World Cup, which South Africa lost to Germany, could have been wrongfully influenced after a German newspaper exposed allegations of how Germany facilitated an arms deal in return for Saudi Arabia’s vote.

The newspaper reported that the German government lifted arms restrictions a few days before the vote to allow a shipment of arms to the Middle Eastern country.

We live in a world where facts and fiction get blurred
In times of uncertainty you need journalism you can trust. For 14 free days, you can have access to a world of in-depth analyses, investigative journalism, top opinions and a range of features. Journalism strengthens democracy. Invest in the future today. Thereafter you will be billed R75 per month. You can cancel anytime and if you cancel within 14 days you won't be billed.
Subscribe to News24
Next on City Press
Class action: Military veterans instruct lawyer to sue government for billions in compensation