Orange Farm: ‘We have been in lockdown for many years. This is not new to us’ Children continue to play football outside during day 20 of the national lockdown in Orange Farm. Picture: Tebogo Letsie

How communities have dealt with the lockdown highlights the disparities in SA. In Orange Farm, misinformation and ignorance collide

After driving for almost an hour, we arrive at Orange Farm, a township located about 45km south of Johannesburg.

As we approach the popular Eyethu Mall, I can’t help but observe that the lockdown doesn’t seem to apply in this part of town.

There is a long queue at the mall entrance, people are not wearing masks or gloves and there is no social distancing whatsoever.

I found myself conducting a Covid-19 mini lecture to the kids, teaching them about the virus and why is it important to adhere to the regulations

A few kilometres away from the mall, I spot a police van, but the police officers seem not to be bothered by what’s happening around them.

I ask myself if these people know what the Covid-19 coronavirus is.

Are they ignorant? Do they not care? As we continue our drive around the township, I get the shock of my life when I spot children loitering in the streets.

I found myself conducting a Covid-19 mini lecture to the kids, teaching them about the virus and why is it important to adhere to the regulations so that we can flatten the virus transmission curve.

There is no coronavirus in Orange Farm. It only exists in suburbs like Sandton
Neo

I challenge the government to reach out to disadvantaged communities and educate people about the virus.

Most of these communities are aware of Covid-19, but they are not well informed about its implications.

“There is no coronavirus in Orange Farm. It only exists in suburbs like Sandton,” says a man who identifies himself as Neo.

He explains that many residents of the area usually don’t go anywhere as most of them are unemployed.

“As I am speaking to you now, we have more than 1 million people in Orange Farm, but only a few wake up every morning to go to work. There are people who have not been to town for at least five years, so many of us here won’t be exposed to the virus,” Neo says, adding that government has neglected the township for many years.

While Neo is aware that the virus is a danger to society, he says the residents of Orange have bigger problems.

“We have been in lockdown for many years. This lockdown is not new to us,” he says. “Some people don’t have electricity and, as a result, they are running from their houses because it’s cold. They find joy outside because it’s warmer and they interact with people and they give each other hope,” Neo shares.

Most of the residents say it is impossible to adhere to lockdown regulations as their homes are dark and cold, which they have been for almost a year.

This is after an electric transformer exploded a year ago and to this day has not been replaced. Many homes were left without power as a result.

More than 65 homes have been without power since June last year and residents say they have lost hope in the government and Eskom.

They [Eskom] told me each household had to contribute R6 500. How am I going to afford to pay this money when I am just a pensioner?
Vuyani Njomboni

Pensioner Vuyani Njomboni (65), who lives alone in Lakeside township, is hesitant to open the door for us at first, but he warms to us and finally welcomes us into his three-bedroom home.

He ushers us to his dining room, which has a big wooden table and a few black chairs.

Njomboni, who has a hearing problem, admits that his life has been a mess since the power went out.

The father of six explains that he has made several trips to Eskom to question when the power utility plans to restore power “so that we can go back to our lives”.

He has since given up. Pensioner Vuyani Njomboni has lost hope that his electricity will ever be turned on. Picture: Tebogo Letsie

“On January 20, I went to Eskom and they promised to replace the electricity transformers and install new boxes. But they told me each household had to contribute R6 500. How am I going to afford to pay this money when I am just a pensioner?” he asked.

Njomboni uses a paraffin stove to cook, but he has to make sure the windows are open so that he doesn’t inhale the fumes.

“I don’t want to die alone here,” he chuckles.

He tells City Press that he was paying electricity, but now has to suffer because of other residents’ sin of connecting themselves illegally to local power supplies, which resulted in the transformer exploding.

Njomboni says he doesn’t buy groceries in bulk any more, which means he has to go to the shops to buy perishable goods more often.

He says he is even thinking of going back to his home town, Mountlake, in the Eastern Cape.

In another part of the township, Joyce Radebe’s family has also been affected by the blackout. The unemployed 33-year-old, who has a son who was born with cerebral palsy, is having a difficult time raising a child with a disability under strenuous conditions.

“My son drinks formula and every day I have to make plans to make sure I feed him warm milk and bath him. These are really tough times for us as parents who have young kids.

“This situation is dire, especially because we live from hand to mouth,” she laments.

My daughter, who recently gave birth, had to leave our home to stay with our relatives because this life is unbearable
Thakane Moleko

Radebe lives with her mother, Elizabeth Shelembe (54), who is a domestic worker and is the breadwinner. Shelembe says they have to make means to prepare food for her grandson, Amohelang, each day. 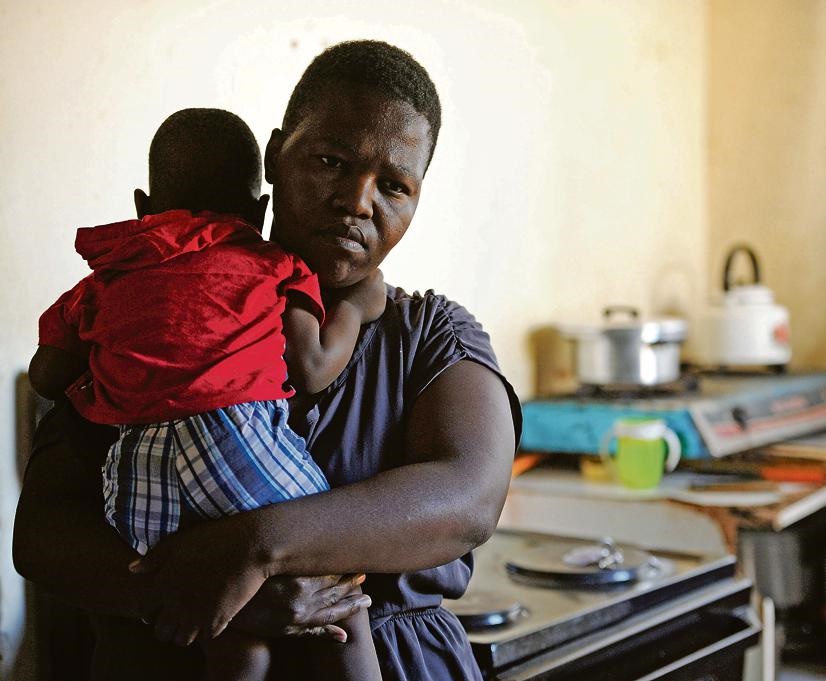 Joyce Radebe (33) with her one year old son Amohelang, have lived without electricity for more than a year. Picture: Tebogo Letsie

Meanwhile, Thakane Moleko (59), a single mother of three, says she has accepted that not having electricity is their life’s lot and they have to live with it.

“My daughter, who recently gave birth, had to leave our home to stay with our relatives because this life is unbearable,” she says.

Moleko, who is also a domestic worker, says she has not worked since the lockdown started, and, for her line of work it’s no work, no pay.

“I use a gas stove to cook, but when the gas is finished I can’t cook. The gas is expensive and it doesn’t last long. Sometimes we have to go to bed with pap and milk or we sleep on an empty stomach,” she says, adding that residents have no choice but to use candles for light and gas to cook.

“We also have to rely on neighbours to charge cellphones, cook and refrigerate food, and some neighbours are unkind to us,” Moleko says.

Some residents blame Ward 2 councillor Jeannette Ramofokeng, saying that she doesn’t care about them as she has electricity in her home. Thakane Moleko has also been without electricity for almost a year. Picture: Tebogo Letsie

“There was a time that our section didn’t have electricity for two months. It is not true that I don’t care about my community. We are all affected,” Ramofokeng said.

She said all the councillors engaged and negotiated with Eskom before the lockdown, asking the utility to be considerate because people are unable to afford a R6 500 once-off payment as they were unemployed.

“Eskom had agreed that the residents should make arrangements to pay the money in monthly instalments. Unfortunately, this lockdown happened and we couldn’t engage further.

We have about 20 people trained to teach the community about the virus. I think many people are just being ignorant or they choose to ignore the rules
Ward 2 councillor Jeannette Ramofokeng

“We understand the frustration of our residents. Not having power is affecting everyone. Some have had no power for a year and some for six months. We do try our best to serve our community. Unfortunately, this is beyond our control as councillors.”

When asked what she was doing as a ward councillor to make sure that the community adheres to lockdown regulations, she said: “We have about 20 people trained to teach the community about the virus. I think many people are just being ignorant or they choose to ignore the rules.”

Is government doing enough to educate poor communities about Covid-19 and mitigate its effects?

SMS us on 35697 using the keyword LOCKDOWN and tell us what you think. Please include your name and province. SMSes cost R1.50. By participating, you agree to receive occasional marketing material

We live in a world where facts and fiction get blurred
In times of uncertainty you need journalism you can trust. For only R75 per month, you have access to a world of in-depth analyses, investigative journalism, top opinions and a range of features. Journalism strengthens democracy. Invest in the future today.
Subscribe to News24
Related Links
On-the-ground in Midrand as lockdown is enforced across SA
Army only knows the boot, the barrel and the bullet
A ride on the “amaCorona patrol” in Alex
Next on City Press
Is there a place for police in the future of South Africa?