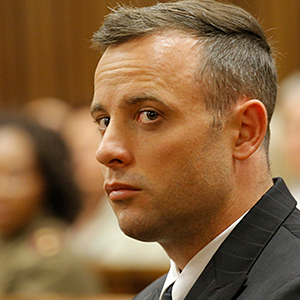 The Supreme Court of Appeal (SCA) in Bloemfontein has increased the sentence of former Paralympian Oscar Pistorius to 13 years in prison for the 2013 murder of his girlfriend Reeva Steenkamp.

"The sentence imposed by the…[high court] with respect to murder is set aside and substituted with the following – the respondent’s imprisonment for 13 years and five months," Justice Legoabe Willie Seriti said.

He said Pistorius should have been sentenced to 15 years, but the SCA took into account the time he had already served.

The State had applied to have Pistorius' initial six-year prison sentence increased.

The world-renowned athlete was arrested on Valentine’s Day in 2013 – the day of the killing.

The self-proclaimed gun enthusiast had fired four shots through a bathroom door, claiming that he believed there was an intruder in the bathroom.

Pistorius served only 10 months of the five-year sentence in prison before being released and put under house arrest.

The State appealed the culpable homicide conviction, and it was later replaced with murder by the Supreme Court of Appeal in 2016.

Masipa handed down a six-year jail term for murder.

The State petitioned the SCA directly, arguing that the six-year sentence was far too lenient.

It is unclear if Pistorius will be moved from the Atteridgeville Correctional Centre back to Kgosi Mampuru II Prison, where he initially spent time.

Pistorius was moved to Atteridgeville four months after he laid a complaint that nurses were trying to kill him by giving him medication he insisted was “toxic”. However, spokesperson for the department of correctional services, Singabakho Nxumalo, said that the transfer was “purely due to his application which was lawfully and procedurally considered and approved”.

We live in a world where facts and fiction get blurred
In times of uncertainty you need journalism you can trust. For 14 free days, you can have access to a world of in-depth analyses, investigative journalism, top opinions and a range of features. Journalism strengthens democracy. Invest in the future today. Thereafter you will be billed R75 per month. You can cancel anytime and if you cancel within 14 days you won't be billed.
Subscribe to News24
Related Links
Henke's message to Oscar Pistorius on his birthday
Next on City Press
‘It felt like we were burying Tshegofatso Pule again’ - says family