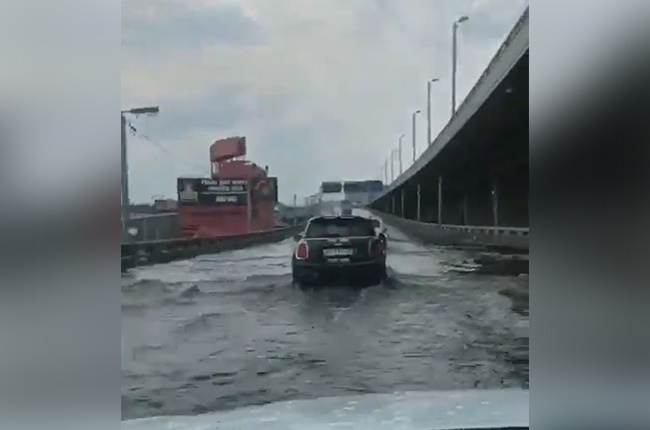 The Gauteng provincial legislature committee wants to know why Johannesburg’s M1 double-decker bridge continues to be flood-prone despite millions spent on its rehabilitation and upgrading.

The portfolio committee on roads and transport says it will soon meet with the City of Joburg’s subsidiary, Johannesburg Roads Agency (JRA), to “account for the unsatisfactory results that were meant to be addressed in the project scope”.

They will seek from JRA among others: “the actual expenditure, closing report of the project, a way forward and possibly where appropriate, request a probe into the project”.

The recent rainfall that hit Gauteng appeared to have been a real test for the M1 double-decker bridge which the committee think it has dismally failed in terms of ending the flooding that has been seen over the years there.

Vehicles were seen negotiating the flooded section, once again leading to an outcry by frustrated motorists on social media. This went on to reach the Gauteng provincial legislature’s committee on roads and transport through calls and letters from concerned organisations, according to the committee chairperson, Dumisani Dakile.

The bridge was part of a broader rehabilitation and upgrading project which cost the City of Joburg, through the JRA, about R169 million.

This covered projects including the M1 overpass bridge commonly known as the double-decker bridge between Carr and Anderson Streets, as well as the M1 highway section between Oxford and Federation bridges.

The committee has now questioned the project in a contract that was won by Khato Civils and wants to know how the money was spent.

In January 2016, R82 million was spent when the [same] section of the freeway experienced heavy traffic congestions as a result of flash flooding
Parliament portfolio committee

In a statement released late on Tuesday, the committee said: “This appears to have been a partial waste of public resources as the recent flooding has proven that the drainage system that was meant to be addressed with the recent rehabilitation, still does not work.

“The recent rehabilitation of the M1 double-decker section that took almost two years to complete was at an estimated value of R169 million; with a project scope that included the reinstatement and upgrading of the existing storm water drainage system and the storm water inlet system. However, the section’s upgrade could not endure the heavy rains that were experienced in Gauteng on October 5,” the committee said in a statement.

“The committee notes that this was not the first rehabilitation that was meant to address a similar project scope. In January 2016, R82 million was spent when the [same] section of the freeway experienced heavy traffic congestions as a result of flash flooding.”

Dakile said they were doing it for the public who “want to understand what really happened with the money spent on the project if the flooding persists on that section of the double-decker bridge”.

Read: 78% of Joburg’s bridges are in ‘alarming’ condition, says Mashaba

“The municipality was clear when the project began that storm water and other things that would address the flooding seen on that section over the years, were part of the scope and we all expected things to be better afterwards - but we were wrong. We now want to understand why the situation remains the same after a multi-million project with clear specifications,” Dakile told City Press.

He said they were careful not to point fingers in any direction but the committee would soon engage JRA over the same matter and a formal probe could also be on the cards.

“We don’t know what really happened but everyone can see that something went wrong somewhere,” Dakile said.

Asked if the committee was also going to call the contractor, Khato Civils, for questioning; he said that would be determined by the outcome of their meeting with JRA but they were looking at “engaging all those who were involved in the project”.

We live in a world where facts and fiction get blurred
In times of uncertainty you need journalism you can trust. For only R75 per month, you have access to a world of in-depth analyses, investigative journalism, top opinions and a range of features. Journalism strengthens democracy. Invest in the future today.
Subscribe to News24
Related Links
Investing in implementation models for water security and resilience a must
‘Carnage on our roads still unacceptably high’ – Mbalula
Worn tyres are damaging our country’s roads
Next on City Press
‘eNCA must send management and staff for human rights training’: Jesse Duarte

Read more on:
m1roadsflooding
Podcasts
Podcast | How to select the right exchange traded funds in this crazy market