An Inkatha Freedom Party supporter runs back from the dividing line between political factions after emptying his AK-47 ammunition clip at the homes of ANC supporters in Umlazi Township Picture: Greg Marinovich

The 1990s were a strange and dislocated time in our recent history – years of hope and fear, of confusion and new beginnings. Pulitzer prize-winning photographer Greg Marinovich documents some of his work through the lens.

The great epoch of apartheid was slipping away; most of the petty laws had disappeared.

Those ridiculous European versus non-European signs had disappeared. All those park benches were repainted, suddenly without racial currency.

The dompas had lost its cruel power over people. It was a time of joy and hope. The Boipatong shooting of 1992 when the cops opened fire at point-blank range at fleeing people Picture: Greg Marinovich

Yet it was laced with a poison unlike any we had seen. It was a toxin that was a noxious mix of political rivalry, racial hatred, ethnic animosities and greed masquerading as principle.

It played itself out in an extended spasm of death. The 1990s was a decade of massacres, some infamous, others unrecorded. 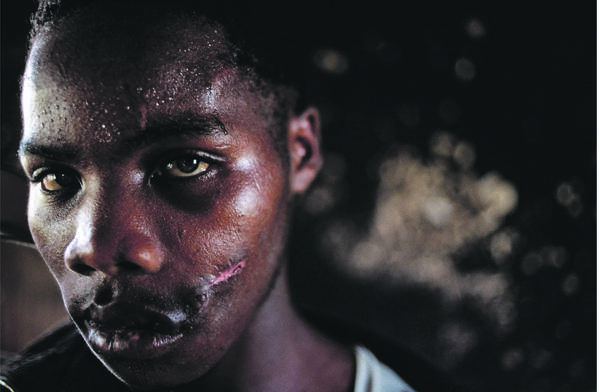 Scar Shobashobane, a young ANC supporter, was shot through the face at the Christmas Day massacre in 1995. He returned to his home which was torched when about 600 men attacked the area, killing 18 people and wounding many more Picture: Greg Marinovich Undercover ANC supporters at Khalanyoni Hostel at the southern end of Khumalo Street. The hostel was overrun early in the war by ANC fighters, most of whom were Xhosa from the adjacent Phola Park shanty town. These warriors were called ‘blanket men’ by police as they wore their blankets to fight, hiding sticks, spears and guns under the heavy wool folds Picture: Greg Marinovich

. public gallery of the Constitutional Court offers a wide-ranging visual history of the internecine conflicts and violent strife that engulfed large parts of South Africa in the 1990s. This followed the unbanning of 33 political parties and the release of political prisoners in the protracted lead-up to nonracial elections in 1994. The photographs bear unflinching witness to the pain of becoming of a democratic nation. Riot police help a colleague injured by a grenade during clashes between security forces, and ANC and Azapo supporters in Bekkersdal in February 1994, two months before the democratic elections Picture: Greg Marinovich A family carries home its belongings after months spent in a tented refugee camp for ANC families from the Sonkombo area from which they had fled because of attacks by the rival Inkatha Freedom Party Picture: Greg Marinovich ANC supporters, mourners and activists are tear gassed by police during a funeral procession through the streets of Thokoza Picture: Greg Marinovich Child soldiers in the Mandela Section Self-Defence Unit check for Inkatha enemies holding territory in Thokoza Township. Mandela Section was one of the most isolated areas of ANC turf abutting Thokoza’s no-man’s-land Picture: Greg Marinovich
We live in a world where facts and fiction get blurred
In times of uncertainty you need journalism you can trust. For only R75 per month, you have access to a world of in-depth analyses, investigative journalism, top opinions and a range of features. Journalism strengthens democracy. Invest in the future today.
Subscribe to News24
Related Links
Gallery: Soweto’s signature style - inspired by Sophiatown
5 cameras on a smartphone, LG levels up for content creators
Gallery: ANC manifesto launch in Durban
Next on City Press
How will SA fund Covid vaccines? Treasury suggests raising taxes

Choose a newsletter
Voting Booth
President Cyril Ramaphosa is set to address the nation at 8pm this evening on developments in relation to the country's response to the Covid-19 coronavirus pandemic. What are you more concerned about?
Please select an option Oops! Something went wrong, please try again later.
More business closures
34% - 44 votes
No clarity on vaccines
29% - 38 votes
Lack of government communication
18% - 23 votes
Move to level five
20% - 26 votes
Previous Results
The best of 2020
forsubscribers
Can you guess who featured in our most popular articles from 2020?