Pillars of misinformation: A closer look at the RET network About 89% of these tweets are original posts and include graphics, hashtags and links to media articles.

The network includes 51 accounts that were created over 11 years –between 2009 and last year. The content distributed by the network is exclusively anti-Cyril Ramaphosa, pro-Jacob Zuma and pro-RET.

High volumes of tweets are posted daily, with some individual accounts sending a single tweet every three to seven minutes, all day and every day.

The network’s overall message is clear: Zuma is the father of RET and is being abused by the judiciary and Ramaphosa’s faction, while Ramaphosa has betrayed the trust of black South Africans by allowing himself to be dictated to by the white business elite.

The Centre for Analytics and Behavioural Change has outlined a list of tools used by the network to spread fake news. Their playbook is typical of other networks, who use the same tactics to manipulate narratives for their own ends.

Here are the six telltale signs that this conversation is being deliberately manipulated on social media – the smoking guns that give away the mischief long after the six bullets are fired:

1. Look for cracks in the system

Proponents of misinformation do not have to look deep when driving fake narratives. Current issues such as poverty, crime, corruption and the lack of service delivery serve as the perfect breeding ground for misinformation.

The RET group has used racial inequality in South Africa to justify its online attacks against Ramaphosa and his supporters.

Issues such as the secrecy behind the funders of Ramaphosa’s CR17 presidential campaign created the perfect conditions for the network’s disinformation project to lay its foundations.

On the other hand, Zuma’s defiance of a Constitutional Court order to appear before the Zondo commission raised another set of issues. The former president has shifted the focus from himself by accusing the judiciary of being unfair towards him.

When a former president questions the fairness of the judiciary, cracks are created to initiate fake news.

With cracks identified in the system, drivers of misinformation create false and wildly exaggerated claims to grab the attention of unsuspecting online users.

The pro-Zuma faction is using their RET cover to peddle lies, launch attacks against Deputy Chief Justice Raymond Zondo and reduce the testimony of witnesses appearing at the commission to hearsay.

3. Wrap the lie around a kernel of truth and conceal your hand

The best way to make a lie believable is to mix it with the truth. This network has taken advantage of the media to drive their narratives.

The group uses media article links to support their misinformed claims, or to deny the contents of the article and accuse the media of being a puppet of Ramaphosa or white monopoly capital. 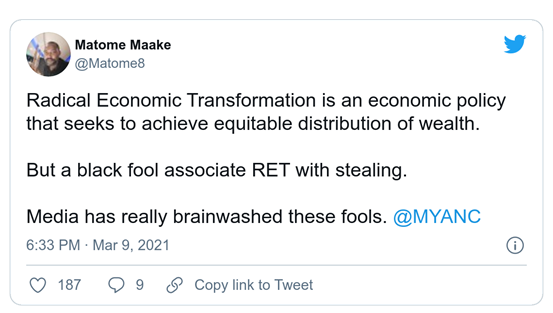 In an attempt to conceal their hand, the network also hides behind dodgy allegations.

In another attempt to legitimise false claims, the network targets a useful person, usually occupying a certain position of power, to drive their narrative.

Thabo Makwakwa is a journalist who co-hosts the Insight Factor, a YouTube channel that hosts interviews with various South African political figures.

Makwakwa’s public stance to support the network and to publish media content that amplifies the voice of the network is misleading to the public.

Zuma had also approved Zondo’s appointment to head up the commission, a fact ignored by the network in its quest for denial.

Part of playing the long game includes investing a lot of resources “into things that may not bear fruits for many years to come”.

The network plays the long game by investing resources into activities to keep their accounts constantly active and to influence as many users as possible.

Ever since the ANC was formed in 1912, issues were handled delicately; certain matters were only discussed by the officials and NEC. Branches were given powers
Its only after Nasrec that issues have been aired publicly for the media to scrutinise and to please CR17 donors pic.twitter.com/P6hQQZhgKT

About 89% of these tweets are original posts and include graphics, hashtags and links to media articles that used to endlessly show support for Zuma, as depicted in the word cloud below, containing the account’s most commonly used hashtags.

@Landnoli is another account that sends out an average of 200 tweets every day, with 96% of them being retweets of the pro-Zuma, pro-RET narrative.

Some of these posts may not be harmful or misleading. However, by pushing a particular narrative at such high volumes every day, they determine the content seen by their followers, who become overexposed to the one-sided, slanted rhetoric.

These are the six signs that give away the game. Despite attempts to hide their hand, this network cannot conceal the evidence of their attempts to manipulate social media narratives by hijacking RET policy and twisting it for its own purposes.

We live in a world where facts and fiction get blurred
In times of uncertainty you need journalism you can trust. For 14 free days, you can have access to a world of in-depth analyses, investigative journalism, top opinions and a range of features. Journalism strengthens democracy. Invest in the future today. Thereafter you will be billed R75 per month. You can cancel anytime and if you cancel within 14 days you won't be billed.
Subscribe to News24
Next on City Press
Africa Day: Foreign nationals being used as scapegoats