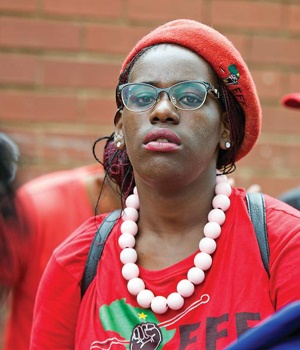 The EFF Students’ Command secretary-general at the University of Pretoria has said there would be war over the use of Afrikaans in universities because white people felt that something had been taken away from them.

“While people are being arrogant, especially white people, there will never be peace. The rainbow nation that [Archbishop Desmond] Tutu and [Nelson] Mandela spoke of is not going to happen,” said Wenzile Madonsela, daughter of Public Protector Thuli Madonsela.

“Society is trying to ensure social justice and the Constitution. But until that is done, it is war. The truth is that it is not going to end here. Afrikaans might fall ... but Afrikaners are going to feel that something has been taken from them, and they need it back.

“But black people are going to say ‘but no, this is our land’. It has become, ‘our, our, our’. That pseudo rainbow nation thing won’t work.

“If you look at a rainbow nation, all the colours are of an equal amount. There is no equal amount of colour here so until that happens we are not going to rest.”

Violent protests rocked the university over its language policy and 27 students were arrested after they had attacked one another.

Madonsela said she was the first to be assaulted in the confrontation between students last Thursday and she was called a “k****r” by an Afrikaans protester.

“This white guy came and took off my beret, slapped me on the shoulder and then security came and appeared to be protecting the white students who were whispering from the other side, ‘k****r monkey’ and ‘jou ma se p***’.”

She said the protests pointed to a greater crisis.

“Why I foresee war here is because black people are tired. They’re gatvol.

“We have seen what happened to our parents over 20 years ago. Now the same thing is happening to us. It can’t be correct.

“People have been tweeting that the apple has fallen [far] from the tree, but I am not bothered. I know I am standing for the right thing and I am guided by the Constitution, which is my bible.”

We live in a world where facts and fiction get blurred
In times of uncertainty you need journalism you can trust. For only R75 per month, you have access to a world of in-depth analyses, investigative journalism, top opinions and a range of features. Journalism strengthens democracy. Invest in the future today.
Subscribe to News24
Related Links
Police see red after Tuks protest
Next on City Press
Service provider appointed to get Charlotte Maxeke hospital up and running

Sign-up to our newsletters and get the latest results and info in your inbox.
Voting Booth
Political analysts warn that Ace Magashule’s bid to challenge his suspension from the ANC in court will weaken the party ahead of elections in October. What’s your take on this stance?
Please select an option Oops! Something went wrong, please try again later.
The ANC is already weak
33% - 16 votes
It’ll strengthen the ANC
6% - 3 votes
What happened to internal discussions?
4% - 2 votes
He has brought the ANC into disrepute
56% - 27 votes
Previous Results
The best of 2020
Can you guess who featured in our most popular articles from 2020?