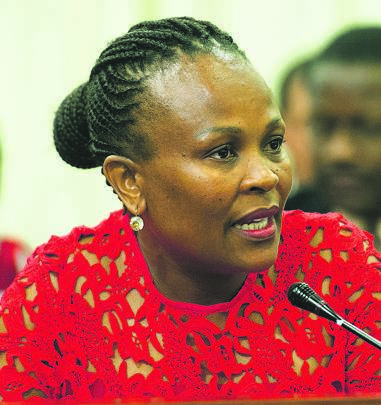 Public Protector Busisiwe Mkhwebane’s office has instituted a probe into the use of the Cohen standard marking method at Wits University.

This comes after the department of higher education, science and technology (DST) last month declined to intervene when it was asked by a distraught mother, who is known to City Press, to do so.

Her son was excluded after being failed by Wits last year when his script was marked using Cohen 60, which was seen as controversial by four other affected students and an academic at Wits.

As a result, the complainant’s son was not re-admitted to the university’s medical school this year.

Oupa Segalwe, spokesperson for Mkhwebane’s office, confirmed to City Press that an investigation was under way after a complaint was received from the distraught mother in April, and transferred to their Gauteng office in May.

“Investigations commenced shortly thereafter. To date, a document request letter has been sent to the university and a response has been received. The Public Protector is analysing the response.”

The terms of reference of the investigation, Segalwe said, were informed by the complaint itself wherein the mother has alleged that her son, and four other students, were irregularly excluded from continuing with their medical studies as “he had obtained 59% in marks instead of 60%”.

He said the complainant further advised Mkhwebane’s office that she had approached the DST but was not assisted.

The complainant, Segalwe said, had requested that Mkhwebane investigate the circumstances surrounding her son’s exclusion.

According to letter from a senior investigator at Mkhwebane’s office in Gauteng, addressed to the complainant last month, in their response to Mkhwebane’s office Wits indicated that the complainant’s son was not re-admitted to the Bachelor of Medicine and Bachelor of Surgery degree programme this year because he did not meet the academic requirements to progress to the next year of study.

Wits also noted in that response that all other students, except the complainant’s son, were registered for the degree in Bachelor of Health Sciences, an alternative programme, this year.

“The university records that the applicable criteria, the academic performance of the students and their respective appeals for re-admission were all evaluated and assessed in terms of the university’s rules, regulations, policies, procedures and standing orders as amended from time to time (“the rules”).

“In particular, the student’s appeals for re-admission were assessed with due reference to the School of Clinical Medicine’s Student Handbook 2018 and the Procedures Relating to the Renewal or Refusal of Registration of Students 2018/2019.”

Mkhwebane’s office said Wits had indicated that the complainant’s grievance was investigated by the university.

“The university further indicated that they met with Vice-Chancellor Professor Adam Habib on February 27 2019 and various issues were raised and discussed. The vice-chancellor looked into these issues and responded to [the complainant] in writing on March 4 2019. The university indicated that the vice-chancellor determined that the university’s rules had been correctly applied and that there were no procedural irregularities with the decision to decline [the complainant’s son’s] appeal for re-admission.”

Wits’ response to the Public Protector’s office went on to say, “In conclusion, after an extensive internal assessment, the university is satisfied that it has applied its academic criteria in a procedurally fair manner and that the complaint of unfair academic exclusion as alleged by the students is without merit,” Mkhwebane’s office said in the letter.

Meantime, Dr Diane Parker, deputy director-general of university education at DST, said in a letter seen by City Press last month, addressed to the complainant, that, according to section 28(1) of the Higher Education Act, the senate of a public higher education institution was accountable to the council for its academic and research functions and must perform such other functions as may be delegated.

Parker said the act empowered higher education institutions to determine the admission policy and, with approval of the senate, the minimum requirements for re-admission of a student.

“The department further respects the institutional autonomy enjoyed by universities and, therefore, would like to draw your attention to section 42 of the act wherein the conditions under which the minister may intervene in the affairs of a university are stipulated.

“The minister or the department does not have the powers to intervene in a matter that involves application of rules by a university. If you [the complainant] still believe that the university did not apply its rules correctly, that an administrative injustice has occurred and you have exhausted the internal appeal process with the council, you are advised to report the matter to the Wits Integrity Hotline,” Parker said in the letter.

The complainant and affected students had filed complaints with the South African Human Rights Commission. Buang Jones, the commission’s Gauteng office manager said: “The commission cannot comment all that much on this matter, save to say that we have received submissions from both the parent and the university and are considering them. The complainant will be informed of any further developments.”

* This story was updated on July 23 to add the comment bu the Wits spokesperson.

We live in a world where facts and fiction get blurred
In times of uncertainty you need journalism you can trust. For 14 free days, you can have access to a world of in-depth analyses, investigative journalism, top opinions and a range of features. Journalism strengthens democracy. Invest in the future today. Thereafter you will be billed R75 per month. You can cancel anytime and if you cancel within 14 days you won't be billed.
Subscribe to News24
Related Links
Med students take on Wits
Sting operation leads to arrest of Wits registration fraudsters
Next on City Press
Zulu royal family feud: Zwelithini’s brothers reject MisuZulu