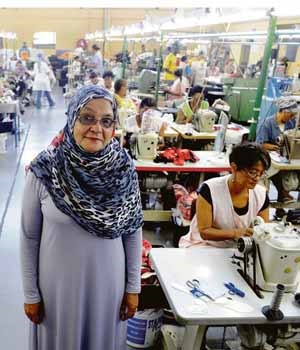 Rachmat Thomas is the MD of Chic Shoes, which employs 300 people in its factory in Parow. Picture: Lulama Zenzile

When she was 15, Rachmat Thomas left Kensington High School in Cape Town to work at a shoe factory to support her sick parents.

Her mother and father had both suffered strokes in quick succession.

As a teenaged table hand at the now defunct Olympic Flair in Elsie’s River, Thomas learnt how to trim and clean leather, as well as how to glue shoes together.

Today, Thomas (61) is the managing director of Chic Shoes, where 300 employees design and make tens of thousands of shoes a week at a factory in Parow.

Her clients include Woolworths and the SA Police Service, whose female staff members are shod in Chic’s court pumps.

Last week, City Press visited the factory, where, inside the reception room, a Progressive Business Forum certificate of appreciation signed by ANC secretary-general Gwede Mantashe is displayed. Another poster on the wall quotes Marilyn Monroe: “Anything is possible with the right pair of shoes.”

For the interview, Thomas wore a pair of flat white pumps with fine ribbons on the front.

“See, these are structured pumps,” she says. “They’re different to the flexible, fold-up kind we make for Woolworths.”

In 2010, Chic Shoes did an initial trial run of flat, structured pumps for Woolworths, which was unsuccessful.

But Thomas went back to the drawing board, and, later that year, a modified fold-up version started flying off the retailer’s shelves. Initially, Chic Shoes supplied 6 000 pairs of the pumps a week, in three colours.

Today, it makes up to 17 000 pairs a week, in 15 colours, which change to match each season’s fashion hues.

“This pump is comfortable and yet made to fold up into a woman’s handbag. This is for busy women who want to step out of their heels to do grocery shopping after work,” says Thomas.

She smiles while speaking and sprinkles her sentences with “my dear”.

Thomas started at Olympic Flair in 1968, where she worked her way up the ranks to become a supervisor.

But Olympic Flair fell on hard times and, over the years, reduced its workforce from 5 000 to 150, until it eventually abandoned local manufacturing to import products from China instead.

In 2004, Thomas and co-directors David Arendse and Ivan Meyer raised Chic Shoes out of Olympic Flair’s ashes, thanks to a loan from the Industrial Development Corporation (IDC).

Over the years, the IDC put R46 million into the company. This included R8 million for the two-storey factory building in Parow, and R7 million for machinery.

“The IDC offers a lower interest rate,” says Thomas. “And they don’t pull the carpet out from under your feet like the banks do.”

As someone who learnt the shoe trade from the bottom up, Thomas says she attended training courses to hone her business savvy over the years.

“My passion is shoes, so to get on top of the management or business side, I had to attend many courses.” She imparts a business tip: surround yourself with smart people – people who know more than you do.

“Growing our business so quickly has been stressful and immensely challenging. Every day in business is different – you have to be strong and brave, and think on your feet.”

The Woolies fold-up pump saved Chic Shoes from collapse after retrenchments during the recession whittled the staff down to 90 in 2009.

This was tough, as Thomas thinks of her staff as family. She says young workers must be taught responsibility for their company’s growth and future.

“For example, we had so many matriculants who started here last year. It really is important to teach and inspire these young people,” she says.

Thomas insists that women can have both a family and a successful career. She married her husband, who works in printing, when she was 17. They are still married and live in Mitchells Plain. They have two children, both of whom now work for Chic Shoes.

Looking at the future, the factory might expand to larger premises if the demand for Woolies pumps continues to rise.

And when the pressure gets too much? She finds calm in prayer and reflection, says Thomas.

We live in a world where facts and fiction get blurred
In times of uncertainty you need journalism you can trust. For only R75 per month, you have access to a world of in-depth analyses, investigative journalism, top opinions and a range of features. Journalism strengthens democracy. Invest in the future today.
Subscribe to News24
Next on City Press
Andile Ngcaba gets leg up in Dimension Data unequal remuneration trial Choose a newsletter
Voting Booth
Former president Jacob Zuma's legal team has given the chairperson of the commission of inquiry into state capture, Deputy Chief Justice Raymond Zondo, an ultimatum. Either he recuse himself or Zuma will either prolong proceedings or exercise his right to remain silent
Please select an option Oops! Something went wrong, please try again later.
Zuma is undermining Zondo
64% - 538 votes
Zuma is within his rights
9% - 79 votes
Zondo has done a good job
27% - 228 votes
Previous Results
You and your credit
Sponsored | Can you pass a credit test?